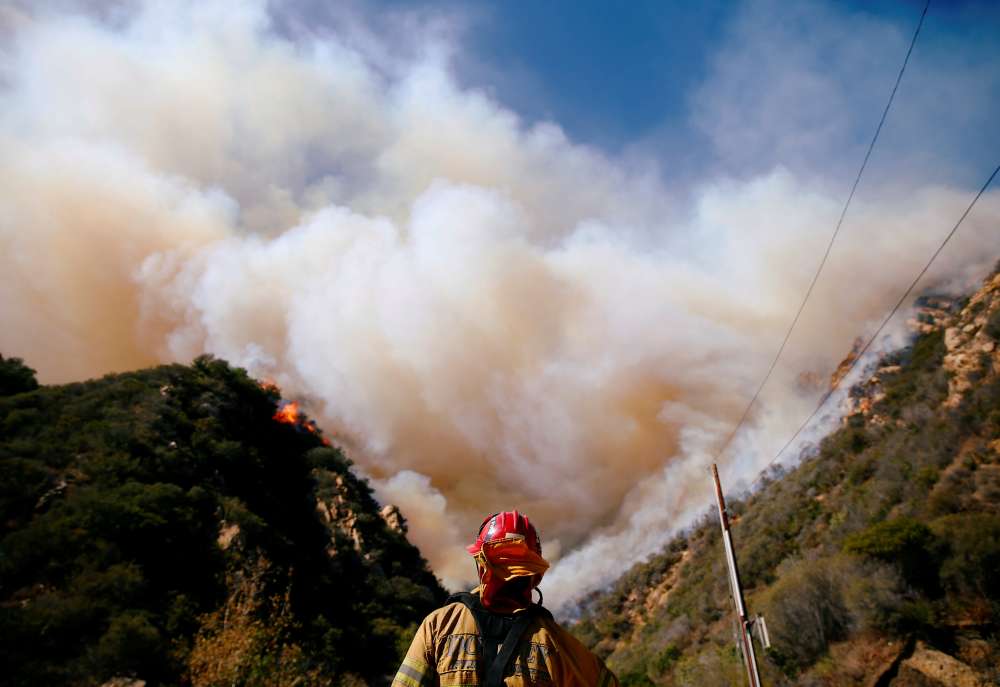 The search for remains of victims in the charred ruins of the northern California town of Paradise was set to intensify on Wednesday, while firefighters stepped up their nearly week-long efforts to contain the state’s deadliest-ever wildfire.

A National Guard contingent of 100 military police trained to seek and identify human remains will reinforce coroner-led recovery teams, cadaver dogs and forensic anthropologists already scouring the ghostly landscape, left by a fire that has killed at least 48 people, some burned beyond recognition.

Two hundred twenty-eight had been listed as missing, but on Tuesday night local county sheriff Kory Honea said those numbers were highly fluid as some individuals may simply have fallen out of touch during chaotic evacuations.

The grim search is concentrated in the little that is left of Paradise, a Sierra foothills town in Butte County, California, about 175 miles (280 km) north of San Francisco, that was overrun by flames and largely incinerated last Thursday.

The killer “Camp Fire,” fed by drought-desiccated scrub and fanned by strong winds, has capped a catastrophic California wildfire season that experts largely attribute to prolonged dry spells that are symptomatic of global climate change.

Wind-driven flames roared through Paradise so swiftly that residents were forced to flee for their lives with little or no warning.

Anna Dise, a resident of Butte Creek Canyon west of Paradise, told KRCR TV that her father, Gordon Dise, 66, was among those who died in the fire. They had little time to evacuate and their house collapsed on her father when he went back in to gather belongings.

Dise said she could not drive her car because the tires had melted. To survive, she hid overnight in a neighbor’s pond with her dogs.

The Butte County disaster coincided with a flurry of blazes in Southern California, most notably the “Woolsey Fire,” which has killed two people, destroyed more than 400 structures and at its height displaced about 200,000 people in the mountains and foothills west of Los Angeles.

The fatality count of 48 from the Camp Fire far exceeds the previous record for the greatest loss of life from a single wildfire in California history – 29 people killed by the Griffith Park fire in Los Angeles in 1933.

The origins of both fires are under investigation. Utility companies, Southern California Edison and Pacific Gas & Electric, reported to regulators they experienced problems with transmission lines or substations in areas around the time the blazes were first reported.

A group of three law firms representing multiple victims of the Camp Fire has filed a lawsuit against PG&E alleging negligence by the utility company and that “its inexcusable behavior contributed to the cause” of the blaze.

Aided by diminished winds and rising humidity levels, fire crews had managed by late Tuesday to carve containment lines around more than a third of both fires, easing further the immediate threat to life and property.

On one small section of the fire containment lines in Butte County that crews have been erecting around the Camp Fire, wind conditions were actually helping those efforts early Wednesday morning.

Speaking to KRCR TV early Wednesday in the Feather River Canyon to the northeast of Chico, California Department of Forestry and Fire Protection (Cal Fire) official Josh Campbell said strong wind gusts in the canyon of up to 30 miles per hours (50 km) were actually helping local crews by slowing the spread of the fire.

“This gives us the opportunity to construct our lines, so we can be ready for the fire and put it out,” he said.

By In Cyprus
Previous articleEconomy’s upturn opens way for changes that will improve the country, says Spokesman
Next articleMaintaining large non-EU deposits and shell companies are over, says FinMin