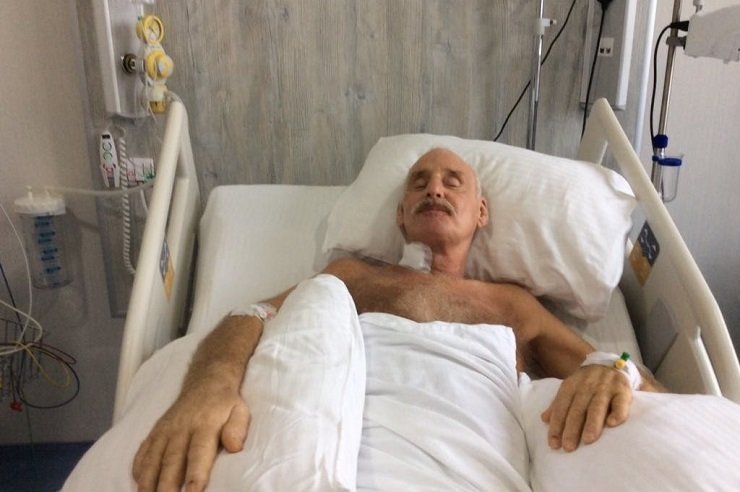 A Scottish army veteran was left paralysed from the neck down after apparently being struck by a mystery bug while on a hike in the Turkish-occupied north, according to a go-fund me campaign launched by friends and family.

On September 15, 2018, former Paras (RAC), Sergeant Major Derek ‘Benny’ Bennett was on a morning hike in the mountains while on holidays in Cyprus when he began to feel a chronic pain in his back. Within a matter of days, he was transferred to the intensive care unit as his health had deteriorated dramatically.

Since then he has been admitted to a hospital in the Turkish-occupied north.

Doctors believe he may have caught a mystery infection which attacked his central nervous system while in Cyprus.

His family started a go-fund me campaign to collect money to bring him back to the UK.

“The problem originated with an extremely sore back, but unfortunately, within a matter of days, his health deteriorated dramatically. The doctors believe he had a serious infection which attacked his central nervous system.  Although he is out of the ICU, there are still many unanswered questions and the exact infection has not been identified. As a result of this infection and of severe spinal  damage, Benny has been left paralysed from the neck down,” says the campaign website.

According to the Edinburgh Evening News, another theory is that the paralysis might be linked to successive back injuries from his time with the Paras.

The relatives say that the medical flight home will cost in excess of £29,000, while noting that Bennett’s “current medical bills have already had a tremendous impact on his life savings.”

“The doctors in Cyprus have been brilliant and although they have done everything they can, the language barrier and the absence of family and friends, means it is essential that we get Benny back home to the UK. Once home, he will need an operation on his back to repair multiple collapsed and splintered discs and will have to start an intense physio journey,” the campaign says.

Donations can be made at: https://www.gofundme.com/zkmh6s-get-benny-home

By In Cyprus
Previous articleAgios Demetrios
Next articleMerkel will not seek re-election as CDU party chair: Reuters source