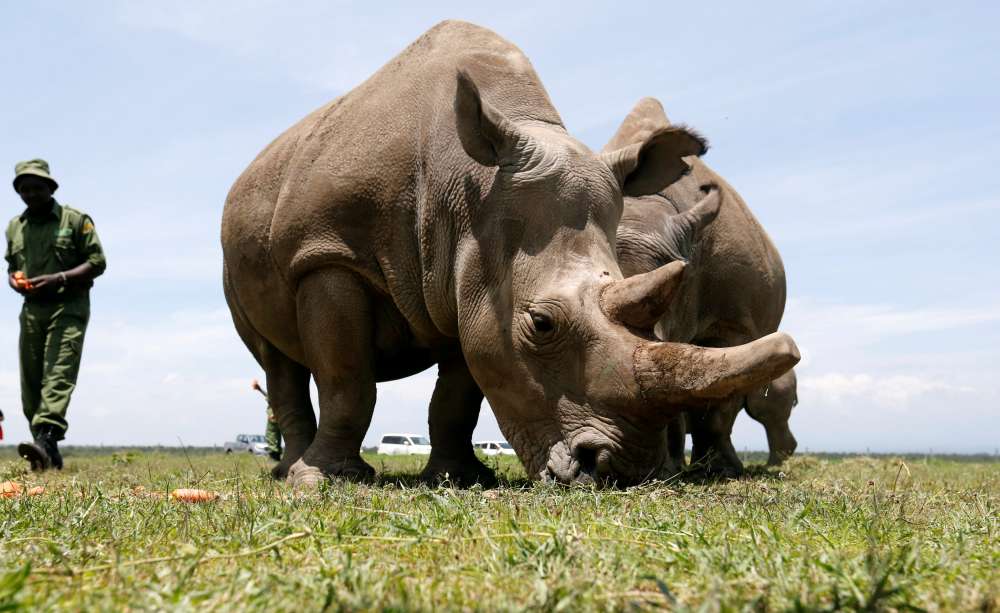 Scientists have created hybrid embryos from the sperm of near-extinct northern white rhinoceroses in the laboratory, hoping they can ultimately help save the species.

The northern white rhino is the world’s most endangered mammal, and its only two living members are a mother and daughter, living in Kenya’s Ol Pejeta Conservancy.

Scientists did, however, manage to collect around 300 millilitres of semen from the last four bull rhinos, which they say is a large quantity, albeit too low-quality for insemination.

Having used some of this to fertilise eggs in vitro from the closest relative – the southern white rhino – they hope to use the same techniques to create an embryo of a pure northern white rhino with eggs harvested from the two females. This could then be implanted into a surrogate to gestate.

“Within three years we hope to have the first (northern white) rhino calf born,” said Thomas Hildebrandt of Germany’s Leibniz Institute for Zoo and Wildlife Research, who co-led the work. The findings were published in the journal Nature Communications on Wednesday.

The low-grade sperm have to be activated with a lab culture so that they can be used in an IVF technique known as intracytoplasmic injection.

The hybrid embryos have developed enough for implantation, and have now been frozen while scientists seek potential surrogate southern white rhino females to carry them to term.

Cesare Galli of the Italian animal assisted reproduction firm Avantea, who worked with Hildebrandt, said there had originally been strong opposition from some conservationists to “interfering in nature” by using IVF or other lab techniques to save the northern white rhino.

“Many people working in the conservation area are very against using biotechnology,” he said.

Hildebrandt argued that using biotechnology was not unnatural, and would simply correct a change in the ecosystem created by the human hunting of rhinos.

“The northern white rhino did not fail evolution, it failed because it was not bullet-proof. It was slaughtered,” he said.

“It caused a disbalance in the ecosystem … and we have the tools in our hands to correct that.”

By In Cyprus
Previous articleMore patrols and drones to prevent arson
Next articleEU Commission: Increased fiscal risks due to uncertainties over CCB sale