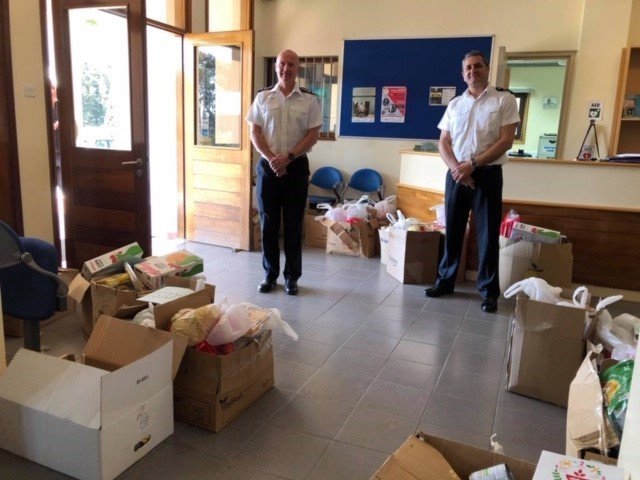 The Sovereign Base Area Police Akrotiri Division has re-instigated a Food Aid programme, first introduced during the financial crisis of 2013 in order to help struggling families during the current COVID-19 outbreak.

During a short presentation on April 16, representatives from the police’s Community Unit, donated 35 boxes of food to community leaders of the surrounding villages of Akrotiri, Assomatos, Trachoni, Erimi, Lofou, Sotira and Avdimou.

The boxes, which were paid for with more than €700 from a charity fund, donations from local businesses, plus individual police officers, including the SBA Police Chief Constable, Chris Eyre, contained large amounts of dried foods and tinned goods, including pasta, cereals, beans, potatoes and flour.

With the increasing uncertainty and worry that many families and people may be feeling, the SBA Police is doing anything it can to help the communities it serves.

Deputy Divisional Commander for the Akrotiri Division, Superintendent Constantinos Petrou, who was present at the handover of the goods, explained why he felt so strongly about the Food Aid initiative.

He said: “We have daily communications with our community leaders and we carry out what are called community impact assessments. During this assessment, we were able to identify 45 families within the SBAs that were in need of our help, so we wanted to be able to provide them with some essentials during this very challenging period.

“Our communities are extremely important to us and if we are able to help those in need, then we will of course, do what we can.”

Akrotiri’s community leader, George Stylianou, praised the support shown by the police to his village, he said: “In the eight years that I have led the Akrotiri Community, I have always been impressed in the way that SBA Police is supporting the vulnerable through their charity
work,”

Those words were echoed by Andreas Aresti, from Erimi, who said: “Despite being a newly- elected community leader, I am impressed with the cooperation and communication with the SBA Police. Their charitable activities have been extraordinary.”

By In Cyprus
Previous article‘To Tragoudi Mas’: 22 Cypriot artists join their voices to fight Coronavirus
Next articleGerman Oktoberfest cancelled due to coronavirus