Saying goodbye to summer with these festivals all over Cyprus 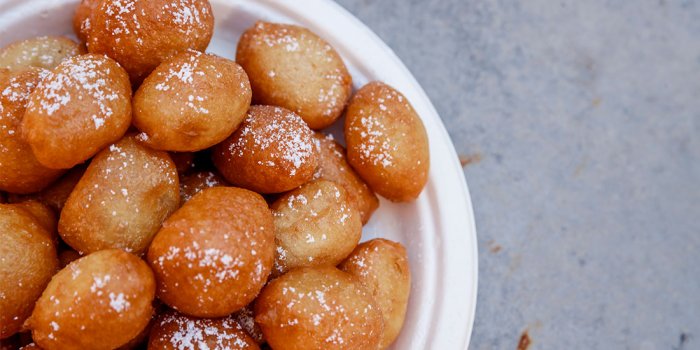 It’s always hard to say goodbye to summer as we also have to bid farewell to the holidays, the weekends at the beach and the starry nights. So, we have found a way to make your last days of summer better and memorable.
Check out these traditional, music, theatrical and food festivals in all over Cyprus.

Display Art PLC organises for 9th year from the 29th of August – 4 of September the original and well known Beer Festival SeptemberFest.

This year many important artists will participate. Sakis Rouvas, Natassa Theodoridou, Stan, Stelios Rokkos, Melisses, Sofia Vossou, Dakis, Mpigalis and Mple are only some of them.

TIckets at www.septemberfest.com.cy and at the entrance of the festival 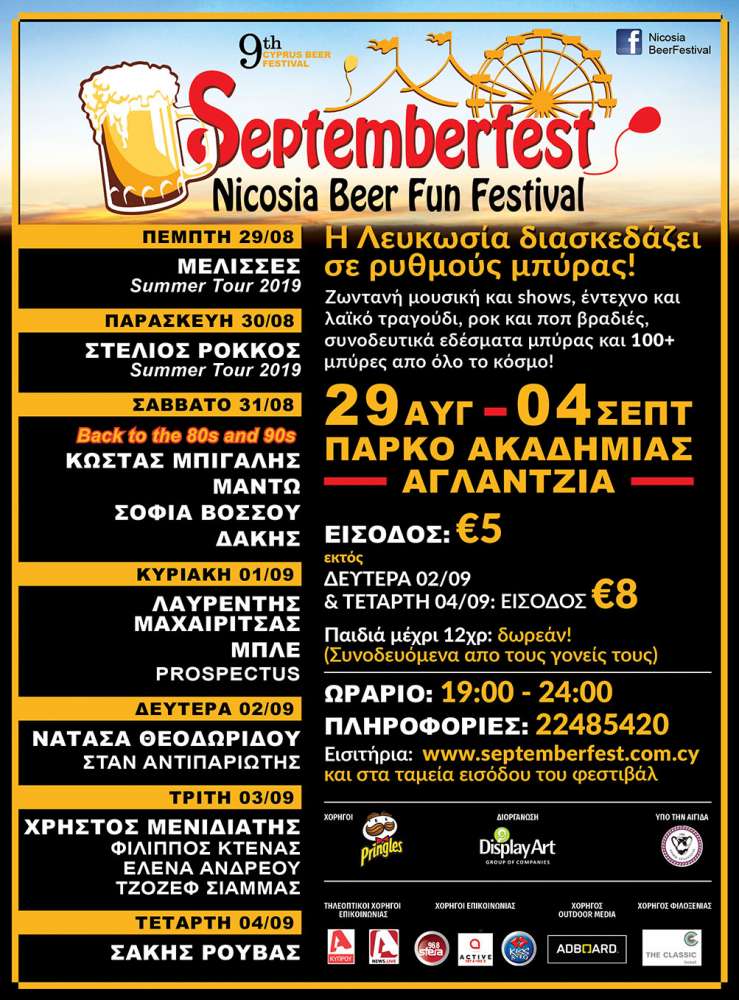 Ofto Kleftiko Festival at Meneou
At this festival you can eat lots of Ofto Kleftiko and other Cypriot foods along with drinks and also enjoy a greek music program by Christos Menidiatis.
22nd of August at the village’s Primary School.
Time: 20:00
Where: Meneou, Larnaca

or this year due to the 20th Anniversary on one side, and to manage to cover the creative activities of jazz musicians in Cyprus on the other side, we have included 6 shows on our program {3 every night} plus 2 extra jam sessions with special guests. In total, we will present 27 artists up to now and there will be a few more coming.

We will start on Friday 23rd and on 9.30pm with The Amalgamation Choir, a project that is consists of all-women and is created and conducted by Vasiliki Anastasiou. Their repertoire draws influences from the musical traditions of shores around and islands floating in the Mediterranean Sea. Strong elements of the therapeutic acapella group singing and polyphony are balanced out by thoughtful instrumentations and arrangements of sea folk songs and original compositions in different languages.
The choir will friendly frame well known members of Cyprus Jazz Musicians

The next band on Friday night, time 10.30pm, is the Michalis Messios Symmetry Band which is perhaps the oldest figures of the jazz scene in Cyprus. First appeared in 1993 with the name Petsteppers and later renamed M. Symmetry Messios Band and presents mostly original compositions of Michalis Messios. The other three members of the band are Charis Ioannou on saxophone, Christos Yerolatsitis on piano and Ioannis Vafeas on drums. The artists are among the most active and dedicated musicians with notable participation in festivals in Cyprus and abroad, international jazz clubs, recordings, personal albums, theatrical performances and of course countless appearances at various venues and events in the island. The band presents mostly Michalis compositions characterized both tunefulness and the intensely rhythmic patterns and improvisation parts. (See full Interview)

Last on Friday’s official program, on 11.30pm, will be is a project created by Cyprus- based guitarist and composer, Odysseas Toumazou. He recently completed the recording of his first studio length album “Ensticto”. His work has been described as, “truly authentic and strong, personal sound within the guitar-trio-genre.” His influences are wide and include jazz, classical and traditional music that create a unique sound catering to a variety of audiences. Improvisation is a key element of Odysseas’ music, allowing for an immersive experience between the audience and band during performances, that can be described as accessible and simultaneously experimental.
At Paradise Jazz Festival Odysseas Toumazou will be performing original pieces inspired by the traditional sounds of the island. The defining improv and jazz qualities mingled with Mediterranean influences is what can best characterize this fusion of sound. The artist is accompanied by George Koulas on drums and Andreas Rodosthenous on electric bass and featuring guest Michalis Kouloumis on Violin.

The night will end with our traditional Jam Session, where the Cyprus Jazz Musicians will mix together in an improvised mood and in more unrestricted forms.

On Saturday the 24th the night will start on 9.30pm., with Nikos Charalambous Trio which is based on original compositions from Nikos, and a few cover songs from the Jazz, Pop/Rock world. The sound belongs in the modern jazz idiom and expresses a balance between strong rhythmical ideas and beautiful melodies combined with strange soundscapes and dreamy atmospheres. Nikos Charalambous is on guitar and compositions, Marijn Roeland Van de Ven is on double bass and Omiros Miltiadous is on drums.

We will continue on 10.30pm, with the Alexis Kasinos Quartet which will be participating in the Paradise Jazz Festival presenting original compositions of the recently released Alexis’ debut album Right Place, Right Time. Having jazz as a basis, the pieces of the album are also influenced from a modern era including a variety of rhythms that set to each composition a certain mood. Every single melody of the recording tells a different story that can be developed in the fantasy of the listener. The band members are Alexis Kasinos on guitar and compositions, Andreas Panteli on piano, Cahit Kutrafali on electric bass and Stelios Xydias on drums.

We kept for last as the highlight of 20th PJFestival the Trio Misteriozo who will welcome in Cyprus and on our festival, one of the most well-known Dutch jazz musicians, the pianist, educator, composer/ arranger Rob van Bavel Rob had won several significant awards, he had released more than 200 CDs as a sideman or as a leader, and he is playing regularly with famous artists. The Trio Misteriozo is conceded by three of the most active members of Cyprus Jazz Musicians and of course of PJFestival history. Is Ermis Michail on guitar, Giorgos Koulas on drums, and Andreas Rodosthenous on electric bass. 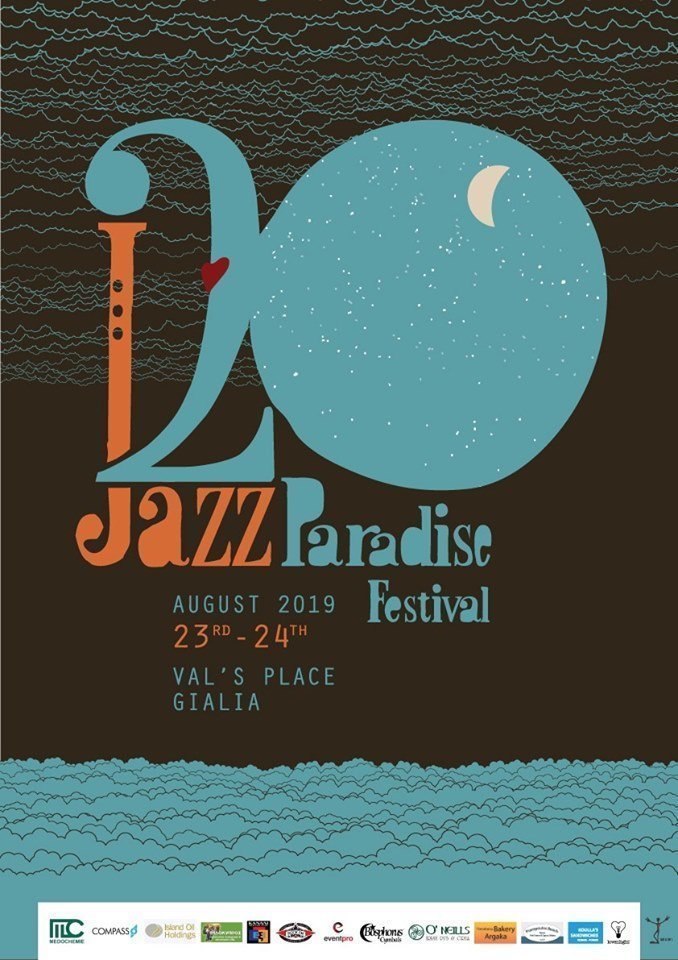 Tastes and Perfumes from Cyprus

This is a festival of tastes and arts taking place at the Community Park of Palaichori. Visitors will get the chance to try Cypriot food like loukoumades, ofto, shiamishi, koupes etc. Traditional dancing and music will also take place.

Interesting theatrical shows all day long and a brandy sour party during night and lots of fun at the Anti-Skino Festival at the beautiful village of Kato Pyrgos.

The Community Counci of Fasoula organizes again this year the famous Resi Festival aiming to promote our traditions and customes. This is the 30st festival taking place at the village and it promises you lots of Cypriot food, drinks and of course resi…

24th of August
Where: Fasoula Village 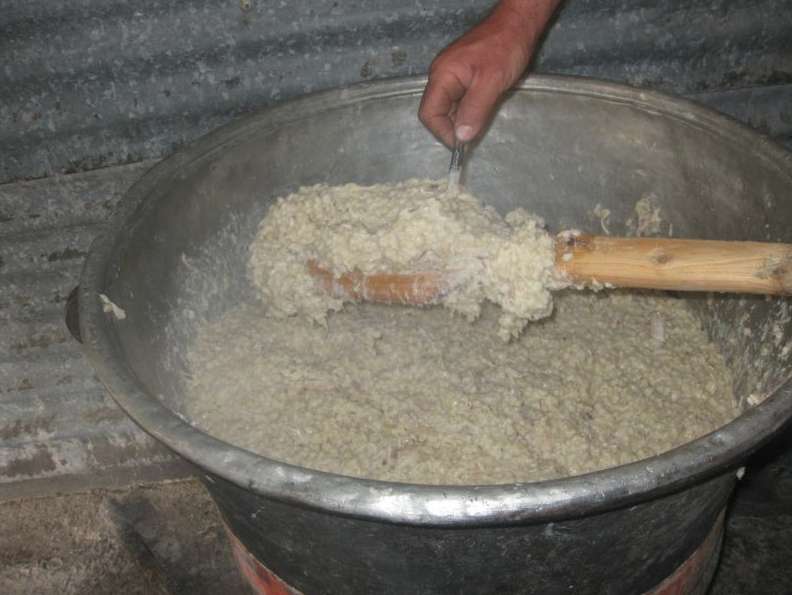 Farmakas village is famous for its tasty tomatoes. For a 32nd year the Community Council invites you to enjoy a night with traditional food and drinks and of course lots of fresh tomatoes.

The Community Council of Emba organizes the 6th Annual Kolokasi Festival on Friday, 30th of August, 2019, at 20:30, at the stadium of the Emba High School.

The festival includes performances by the popular singers Peggy Zina and Loukas Giorkas.

Tickets will also be sold at the entrance at the same price. 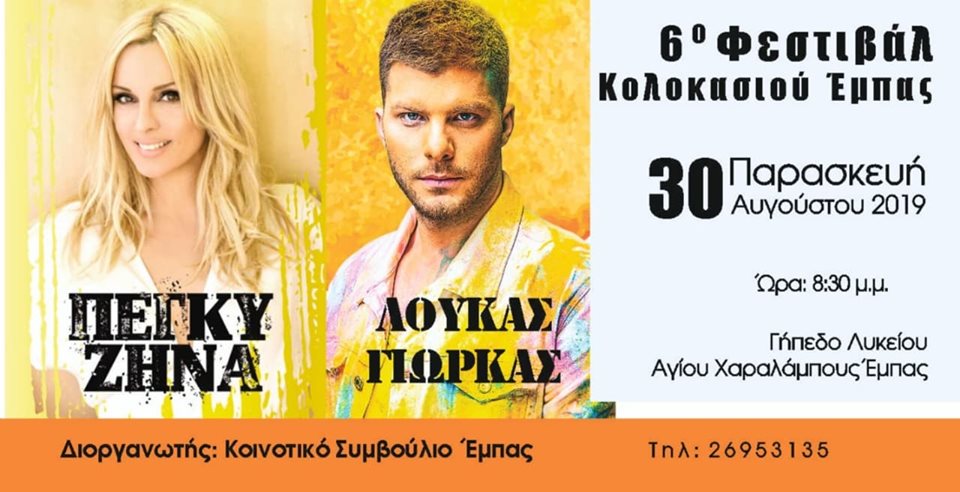 The 20th Pafos Aphrodite Festival opens its curtain with Gioachino Rossini’s masterpiece Il barbiere di Siviglia (The barber of Seville) on 31 August, 1 and 2 September at the Square of the Medieval Castle in Pafos in a production by the Italian organisation C.I.A.L.M. – Teatro Lirico Italiano in collaboration with the Ventidio Basso Ascoli Piceno Theatre and the participation of the Cyprus Symphony Orchestra.

31st of August – 2 of September
WHere: Mediecal Castle Paphos

The Community Council of Zygi invites you to the Fish Festival which will take place at the village. The aim of the festival is to make known to the public the traditional proffesion of the fisherman and of course to have some fun traditional music and dancing and with short boat trips in the sea. 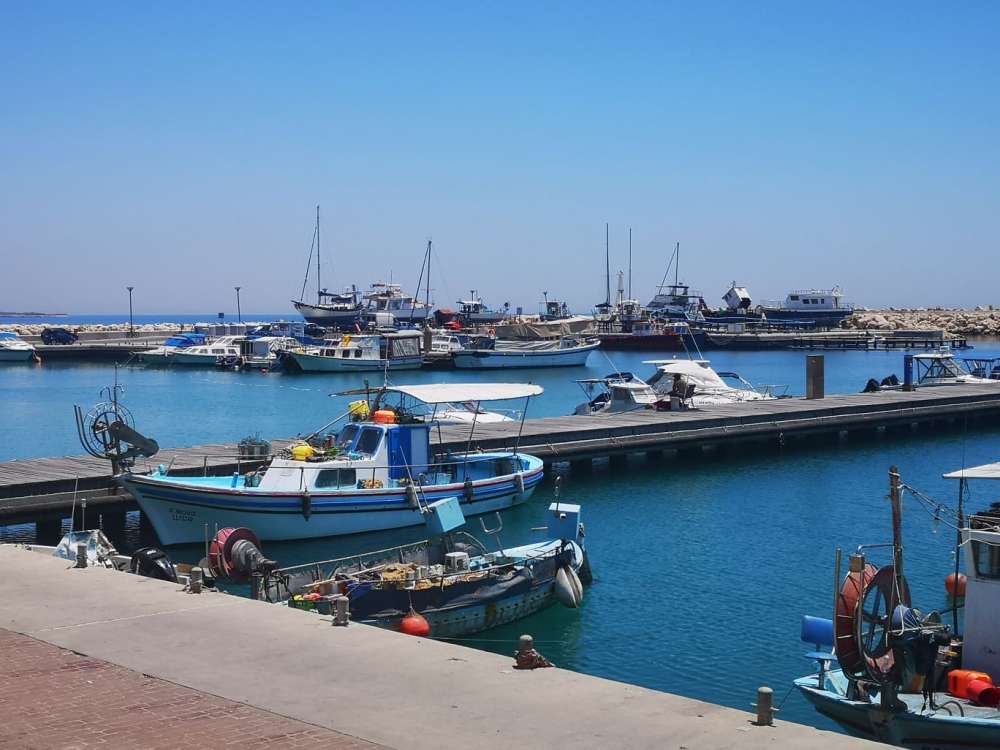 By In Cyprus
Previous articleHealth Ministry examining case of little Antonis
Next articleUpdated: Small boat with refugees arrives in Larnaca