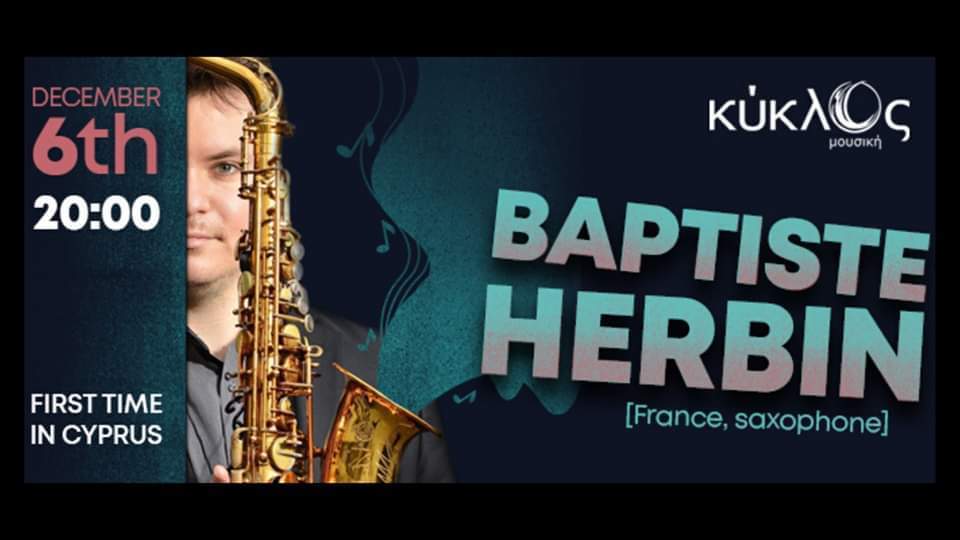 Originally from Chartres, one of the best saxophonists of his generation -Baptiste Herbin began studying saxophone with Jean-Louis Mounier, dedicating himself to jazz music under the guidance of Julien Lourau, Jean-Jacques Rulhmann and, later, Jean-Charles Richard. After studying under Riccardo Del Fra at the Conservatoire in Paris, he began appearing in the French capital’s vibrant jazz scene. There he met André Ceccarelli during his sessions at the jazz club Duc des Lombards. They recorded the album Brother Stoon together, in a quartet with Pierre de Bethmann and Sylvain Romano, with guests Jean Toussaint and Dimitri Dourantonis.

His second album Interférences – in quintet with Benjamin Henocq, Maxime Fougères, Sylvain Romano and Renaud Gensane – was released in 2015. The album Dreams and connection (2016), recorded with Ali Jackson, Darryl Hall and Eduardo Farias resonates with alluring Brazilian atmospheres. His music and style are influenced by Charlie Parker, Cannonball Adderley, Ornette Coleman, Maceo Parker, John Coltrane, traditional music from Madagascar, but also by classical composers such as Debussy, Ravel and Bach.

In November 2012 Herbin played for Dionne Warwick at the Olympia in Paris. He collaborated with Keith Brown on Sweet and Lovely (2011), with Aldo Romano on New Blood (2012), with Jeff “Tain” Watts and Manuel Valera on Shona (2014), with Vincent David, Jean-Charles Richard and Stéphane Guillaume on Fireworks (2015), and with the Francis Lockwood Quartet on Minton’s Blues (2018).

He accompanied Charles Aznavour until his last concerts.

In Cyprus Baptiste will be performing with one of the best Russian jazz piano players Alexey Podimkin and well know Cyprus musicians Nicolas Tryphonos and Andreas Stephanou featuring Leonid Nesterov on keys.