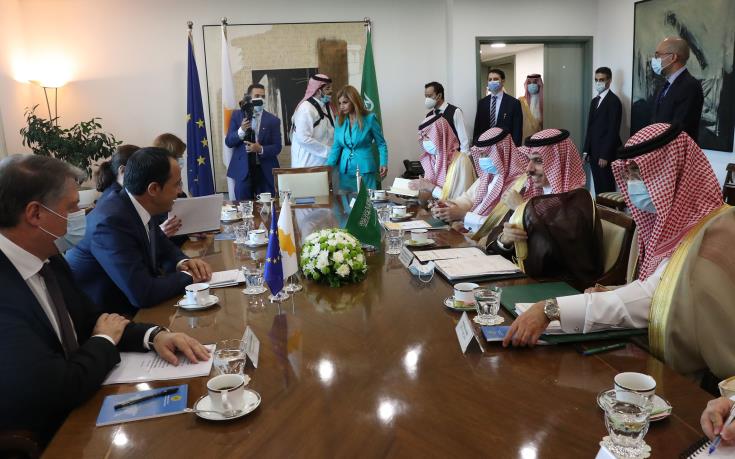 Al Saud, who met with his Cypriot counterpart Nicos Christodoulides in Nicosia on Thursday, also expressed concern over latest developments in the Eastern Mediterranean region.

In statements to the press after their talks, Al Saud called on all countries to abide by the UN Security Council resolutions related to the settlement of disputes and the international law.

He also stressed that disputes should be resolved through dialogue and not through trying to impose situations on the ground.

He also said that “the solidarity and support from countries such as Saudi Arabia, which has a clear understanding of the situation in the Εastern Mediterranean and beyond, are indispensable to us.”

Referring to the two countries’ bilateral relations he noted that an MoU on political consultations will be immediately activated on the basis of a specific road-map, with the purpose of promoting cooperation.

The Cyprus News Agency has learned that it was decided during the talks that the two countries will promote the signing of seven bilateral agreements and the organization of two business fora before the end of the year, one in Cyprus and one in Saudi Arabia with a view to promote investments.

The seven agreements concern among others the issues of energy, economy, technical cooperation, provision of help for the evacuation of Saudi Arabia`s citizens, cooperation in public security issues and the judicial sector, commercial shipping, the exchange of classified information and the prohibition of the illegal export and import of cultural artefacts.

Moreover it was decided that the two countries will work in order to launch direct flights between them, through Cyprus Airways and a Saudi Arabia air carrier.