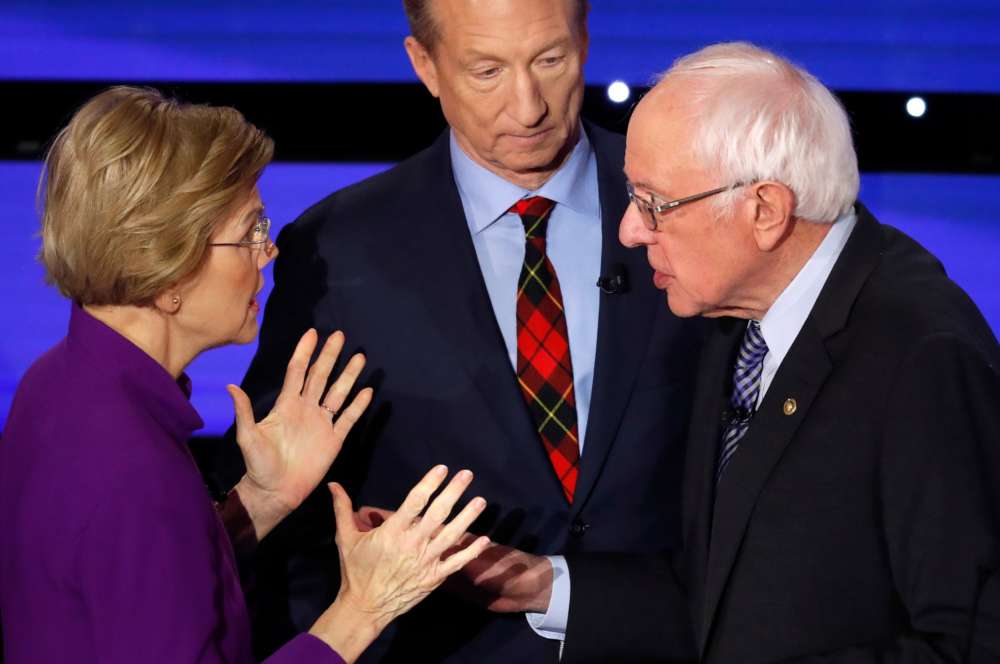 Elizabeth Warren and Bernie Sanders disagreed in a Democratic presidential debate on Tuesday over whether he once told her a woman could not win the White House in 2020, underlining an emerging rift between the progressive contenders as the first voting nears.

After days of tensions between the two U.S. senators, friends and liberal standard-bearers, who agreed early in the campaign not to attack each other, Sanders emphatically denied he ever made the remark, saying it was “incomprehensible” he could have said such a thing in a private 2018 meeting with her.

Warren confirmed the comment and said she disagreed with Sanders, but quickly pivoted to the broader question of whether a woman could be elected president.

“Bernie is my friend and I am not here to try to fight with Bernie. But look, this question about whether or not a woman can be president has been raised and it’s time for us to attack it head-on,” Warren said.

The dispute brought questions about gender, sexism and electability back into the spotlight in the campaign, almost four years after Democrat Hillary Clinton failed in her bid to become the first woman president, in an upset loss to Republican Donald Trump.

With only three weeks until the crucial, first-in-the-nation Feb. 3 nominating contest in Iowa, the sprawling field of 12 Democratic candidates is still struggling to convince voters desperate to oust Trump in November’s election which one of them is best positioned to do so.

Warren pointed out the men on the stage had collectively lost 10 elections, while the two women on the stage – she and U.S. Senator Amy Klobuchar – had won each election they had contested.

“I have won every race, every place, every time, I have won in the reddest of districts, I have won in the suburban areas, in the rural areas,” Klobuchar said, pointing to the 2018 election of women governors in conservative states as further evidence a woman can win the White House this year.

After the debate, Warren appeared to refuse to shake hands with Sanders when he extended his hand as the candidates mingled on the stage. The two had a brief discussion that appeared tense until it was interrupted by candidate Tom Steyer.

Asked on CNN about the moment, Steyer said: “I felt like, OK, there’s something going on here. Good night, I’m out of here. It was one of those awkward moments where I felt like, OK, I need to move on as fast as possible.”

The flap between the two progressives allowed the front-running Biden, who has shown new signs of competitiveness in the two early nominating states of Iowa and New Hampshire, to stay largely above the fray.

Sanders came under the most fire during the party’s seventh debate after rising to the top of some polls in Iowa and New Hampshire.

In addition to his exchange with Warren, he was peppered with criticism for his opposition to free-trade pacts and on how he would pay for his costly Medicare for All plan, which would all but eliminate private health insurance in exchange for a single-payer government programme.

“I don’t know that there’s any trade agreement that the senator would ever think made any sense.” Biden said.

In the discussion on healthcare, U.S. Senator Amy Klobuchar noted that over two-thirds of Senate Democrats had not signed on to Sanders’ Medicare for All legislation.

“The debate isn’t real,” she said.

Sanders, a longtime antiwar advocate who voted against the 2002 authorization of war in Iraq, criticized Biden for supporting that conflict and said they both heard the same arguments from officials in former President George W. Bush’s administration before coming to different conclusions.

“I thought they were lying, I did not believe them for a moment,” Sanders said. “I did everything I could to prevent that war. Joe saw things differently.”

Biden, a former chairman of the Senate Foreign Relations Committee who touts his security credentials, acknowledged the vote “was a big, big mistake” and said that as President Barack Obama’s vice president, he worked to bring the troops home.

“It was a mistake to trust that they weren’t going to go to war,” Biden said of the Bush administration. “It was a mistaken vote, but I think my record overall on everything we have done, I’m prepared to compare it to anybody’s on this stage.”

The Iowa debate came just days before the expected start of a U.S. Senate trial to determine if Trump should be removed from office on charges of abuse of power and obstruction of Congress stemming from his request that Ukraine investigate Biden.

Three of the Democrats in the debate who serve in the Senate – Sanders, Warren and Klobuchar – will sit as jurors in the impeachment trial, taking them off the campaign trail at a critical time. They said they did not mind.

“Some things are more important than politics,” Warren said, adding the trial would show the “corruption of this administration.”

By In Cyprus
Previous articleLarnaca: Prospective ‘buyers’ assault owner, drive off with his car
Next articleDemocrats add last-minute evidence to Trump impeachment case