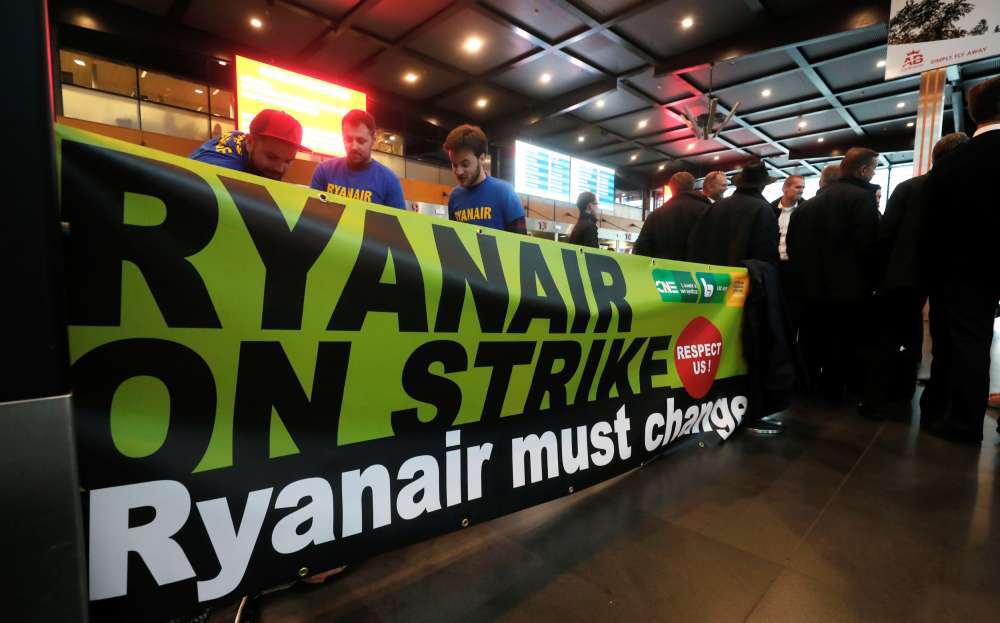 A staff walkout at low-cost carrier Ryanair grounded planes in six European countries on Friday, disrupting the plans of more than 40,000 passengers.

Europe’s largest low-cost carrier has faced multiple strikes since it bowed to pressure to recognise trade unions for the first time in December, with staff stepping up pressure in talks over pay and conditions.

The impact on the airline’s bookings has forced it even to consider cutting its short-term growth plans.

Cabin crews in Germany, Belgium, Portugal, the Netherlands, Spain and Italy, as well as pilots in Germany, began a 24-hour walkout as airspace opened on Friday.

“They don’t care about us. We are just numbers. We are lemons to be squeezed and thrown away,” said Juan Fernandez, a former Ryanair employee who joined protesters at Brussels airport.

Strikers at the airport held up placards with the message ‘RYANAIR MUST CHANGE’.

Ryanair, which initially cancelled 150 flights due to what it said was an unnecessary strike by a “tiny minority of cabin crew”, cancelled up to 100 more on Thursday after German pilots said they would join the protest.

The Irish airline said on Friday that over 2,150 of its 2,400 scheduled flights would operate as normal.

The action in some of Ryanair’s largest markets will be its second biggest one-day strike. Some 55,000 customers were affected in August when pilots in five European countries walked out at the height of the summer holiday season.

The strikes have boosted low cost rival easyJet, which forecast annual profit at the upper end of expectations on Friday, benefiting from robust demand and the cancellations at Ryanair.

Shares in Ryanair were 0.2 percent higher at 13.18 euros by 1240 GMT, having fallen 20 percent since the action ramped up in mid-July.

Ryanair says it has made significant progress in recent weeks during negotiations, including reaching collective labour agreements with staff in Ireland, Britain, Italy and Germany.

The dispute in other markets chiefly centres on Ryanair’s practice of employing a large proportion of its staff under Irish law, which unions say inconveniences staff and impedes them from accessing local social security benefits.

Hans Elsen, secretary of Belgium’s LBC-NVK union, said that even though Ryanair’s chief executive Michael O’ Leary has said he offered unions what they wanted, LBC-NVK never got it on paper and cannot take what he says in the media as an offer.

The union represents about 90 cabin crew and pilots in Brussels.

“If need be, there will be further strikes. We have no other solution. We want the company to change,” union representatives Ingolf Schumacher told Reuters.