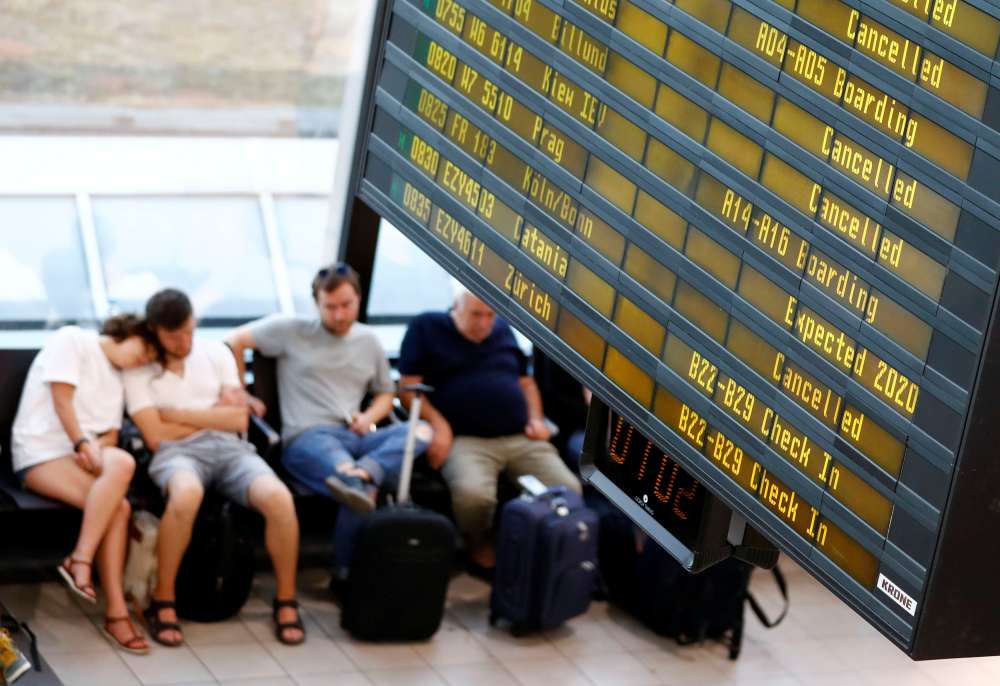 Ryanair faced its worst one-day strike on Friday after a walk-out by pilots in five European countries disrupted the plans of an estimated 55,000 travellers with the budget airline at the height of the summer holiday season.

Ryanair, which averted widespread strikes before last Christmas by agreeing to recognise unions for the first time in its 30-year history, has been unable to quell rising protests over slow progress in negotiating collective labour agreements.

In response to unions serving strike notices, Ryanair had announced the cancellations in recent days of 250 flights in and out of Germany, 104 to and from Belgium and another 42 in Sweden and its home market of Ireland, where around a quarter of its pilots were staging their fifth 24-hour walkout.

The airline expected the travel plans of 42,000 travellers to be hit by the action in Germany alone, with the majority of passengers switched to another Ryanair flight and the remainder either refunded or rerouted.

“What I find unjustified is that the pilots draw the short straw, because people want to fly cheaply,” said Daniel Flamman, one of several passengers Reuters spoke to at Frankfurt airport who said they sympathised with the pilots.

“It’s annoying that it’s happening in the summer holidays, but it’s the only means they have.”

Ingolf Schumacher, pay negotiator at Germany’s Vereinigung Cockpit (VC) union, said pilots had to be prepared for “a very long battle” and that it could take months to push through change at Europe’s largest low-cost carrier.

The unrest is one of the biggest challenges to face long-term chief executive Michael O’Leary, who was once quoted as saying he would rather cut off his hand than recognise unions and on another occasion crossed a picket line of baggage handlers to help load a plane.

The outspoken O’Leary has in recent years tried to soften Ryanair’s abrasive public image, fearing it could be counter-productive for Europe’s most profitable airline.

The strike topped the 300 flights a day Ryanair had to cancel last month when cabin crews in Belgium, Portugal and Spain went on strike for 48 hours.

A Dutch court also rejected a case from Ryanair seeking to block pilots in the Netherlands from joining Friday’s strike, but the Irish airline said all of its flights there would run as scheduled.

Ryanair operates more than 2,000 flights a day, serving 223 airports across 37 countries in Europe and North Africa, and insists it will not change the low-cost model that transformed the industry and has made it Europe’s most profitable airline.

At Charleroi Airport, Belgium’s second largest and a major Ryanair hub in the region, striking staff gathered in the departure hall and held up banners reading “Ryanair must change- Respect us”.

“Ryanair is the only multinational in Belgium that doesn’t respect the Belgian law and that’s not normal,” said Didier Lebbe, a representative of union ACV-CSC, whose demands include securing its pilots pay when they are on stand-by.

Apologising to customers, Ryanair said in a statement that it took every step to minimise the disruption and called on striking unions to continue negotiations instead of calling any more “unjustified strikes.”

It has further angered unions by threatening to move jobs away from bases affected by the stoppages, and began carrying that out in Dublin where it cut its winter fleet by 20 percent and put over 300 employees on preliminary notice.

Ryanair has said that strike action will hit average fares because it takes up seats that it could otherwise have sold at a high last-minute price.