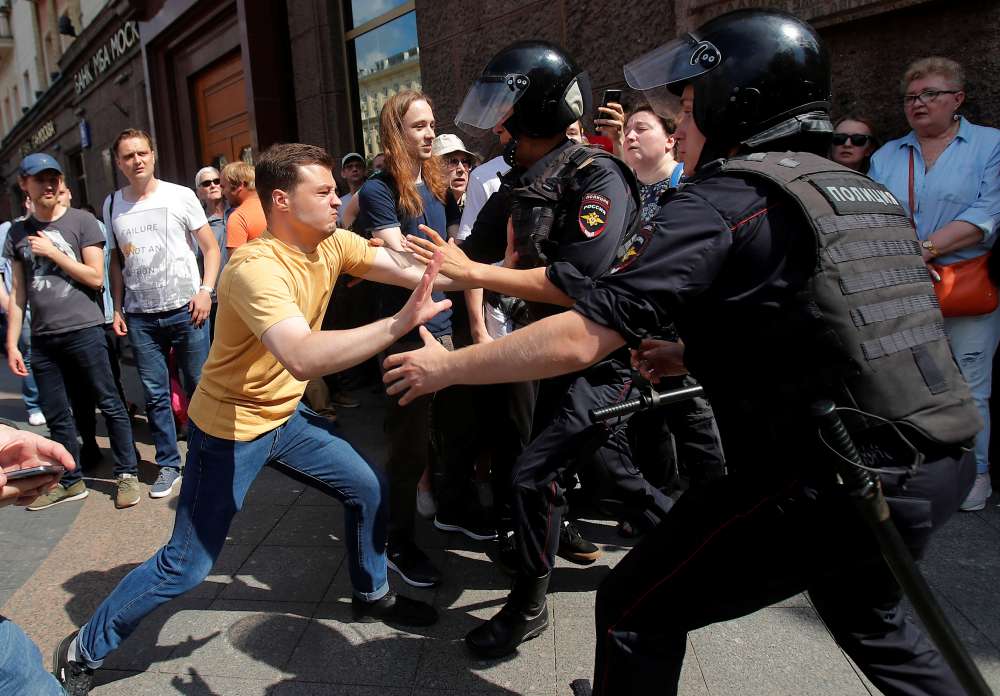 Russian police detained 317 people on Saturday, including prominent opposition activists, around a political protest in Moscow which authorities had declared illegal.

Jailed opposition leader Alexei Navalny had called for the protest, near the Moscow mayor’s office, to pressure authorities to allow opposition-minded candidates to run in a Sept. 8 local vote in Moscow, which they have been barred from.

The protest campaign is also intended to raise the heat on Russia’s tightly-controlled political system at a time when President Vladimir Putin’s rating has dropped due to discontent over years of falling real incomes.

Authorities say the local election candidates were prohibited from running because they had failed to collect a sufficient number of genuine signatures in their support, an allegation the opposition rejects as false.

OVD-Info, a monitoring group, said police had detained at least 317 people before or at Saturday’s protest, which was attended by thousands of people.

Reuters witnesses said some of those detained appeared to be ordinary passersby in the wrong place at the wrong time.

One of those detained, Alexander Latyshev, 45, said he had came to Moscow from the nearby Vladimir region to discuss business with an associate and been randomly detained by police.

“I was just sitting on a bench (when they took me),” he told Reuters inside a police bus.

Earlier on Saturday, the police detained activists to prevent them from attending the protest and blocked off some central streets to help them control the situation.

Under Russian law, the location and timing of such protests needs to be agreed with the authorities beforehand, something that was not done in this case.

“ORDER WILL BE MAINTAINED”

Although the election to select members of Moscow city’s parliament is not a national one, opposition activists view it as an opportunity to try to gain a foothold in the Russian capital where Kremlin-backed candidates have proved less popular in the past than in other parts of the country.

Putin has been in power as either president or prime minister since 1999. He won a landslide re-election victory and a new six-year term in office last year, but has seen his popularity dip since then due to an unpopular pensions reform and five straight years of falling real incomes.

Kremlin critic Alexei Navalny was jailed for 30 days on Wednesday ahead of Saturday’s protest and other members of the opposition have previously had their homes searched.

Ilya Yashin, a Navalny ally, said on Facebook on Saturday that police had searched his Moscow flat overnight before detaining him and driving him out of the Russian capital.

Kira Yarmysh, Navalny’s spokeswoman, said on Twitter she and another activist had been detained on Saturday morning.

Other activists had their homes searched.

Moscow Mayor Sergei Sobyanin had warned on social media beforehand that the authorities would act decisively to guarantee public order.

“According to information from law enforcement authorities, serious provocations are being prepared which pose a threat to the safety, lives and health of people,” Sobyanin had said in a statement.

“Attempts at ultimatums, disorder will not lead to anything good. Order in the city will be maintained.”

Russia’s Investigative Committee has already opened a criminal investigation into an opposition rally in June which it said may have obstructed the work of Moscow’s electoral commission.

An authorised protest in Moscow last weekend calling for the disbarred candidates to be registered was attended by more than 20,000 people, according to a monitor.

By In Cyprus
Previous articleUK PM Johnson tells EU: ditch the backstop or there will be no-deal Brexit
Next articleUpdated: Body of woman found in Tseri field after fire