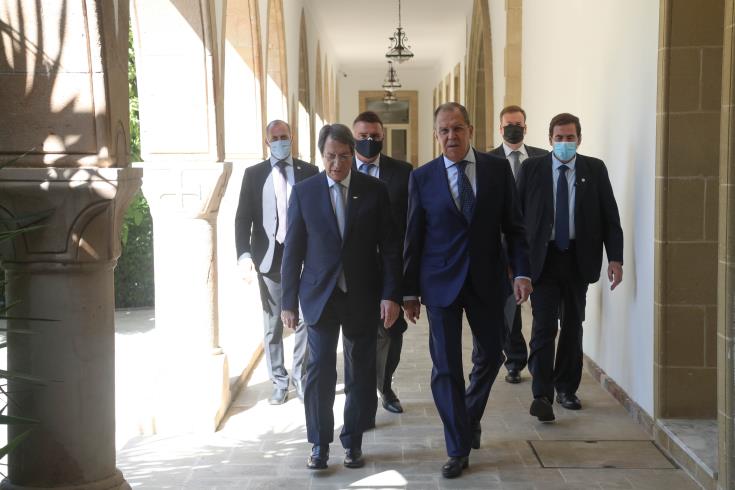 Russian Foreign Minister Sergei Lavrov has told Cyprus that Moscow was ready to help mediate in any talks with Turkey as tensions simmer over energy exploration in the Mediterranean Sea.

Lavrov who is Nicosia since Monday evening said after a meeting with Cyprus President Nicos Anastasiades: “As far as your relations with Turkey are concerned, we are ready to promote dialogue.

“A dialogue pragmatically based on mutual interests and in search of decisions, which will be fair and based on international law.”

Ankara disputes the rights of Cyprus to explore for natural gas in the sea area around the island, saying that some of the areas infringe on its continental shelf.

Cyprus is divided since 1974 following a Turkish invasion and Ankara has no diplomatic relations with the EU-member island, instead backing the breakaway Turkish Cypriot statelet in the north of the island.

At the same time, Lavrov said there were other matters in the region that were of concern.

He said there were outside players like the USA which tried to create lines “and to contribute to conflict instead of peaceful solutions.”

Lavrov described this as a really sad fact because, he noted, peaceful ways of promoting interests were needed in the region.

Compromise and dialogue were the only solutions that could contribute to a peaceful solution of any situation, he added.

“We are open to the development of the dialogue with our Cypriot friends on the bilateral agenda and international matters.”

Before leaving the Presidential Palace, Anastasiades decorated Lavrov with the Grand Cross of the Order of Makarios III for his  contribution in the continuous development of the historical ties between the two countries.

The chief Russian diplomat then went on to a meeting one-on-one with his Cyprus counterpart Nikos Christodoulides.

The two foreign ministers are joined by delegates from both countries, according to an official announcement which also said a review of the full range of Cyprus-Russia bilateral relations would take place.

Around lunchtime, Lavrov and Christodoulides will make statements to the press after signing a plan for consultations for 2021 to 2022.