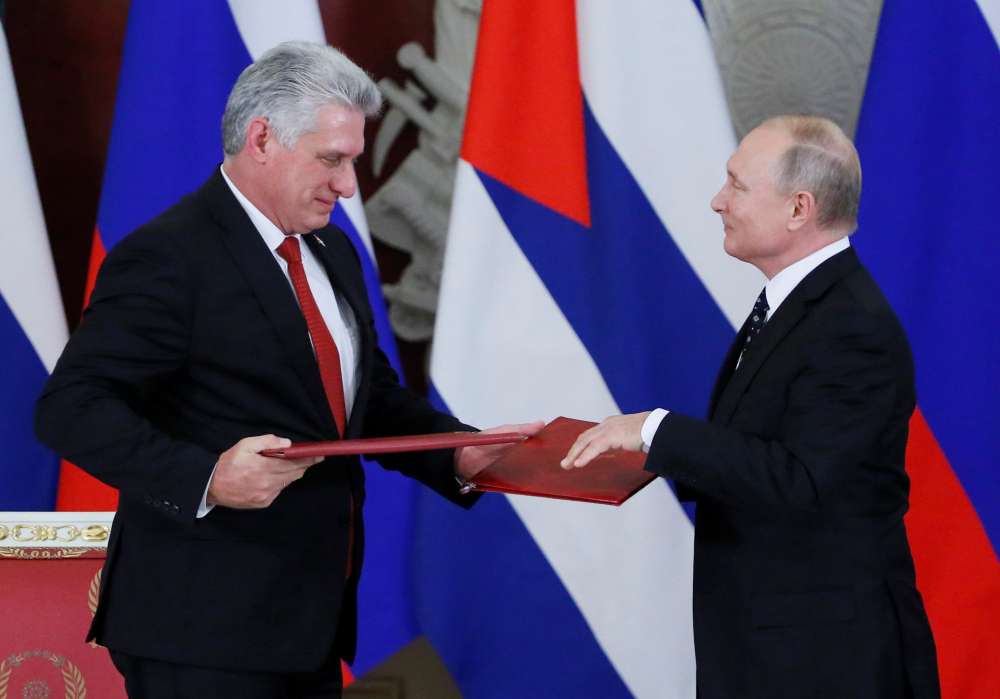 Russia’s Kommersant newspaper had previously reported that Moscow planned to grant Cuba a loan of more than $50 million to allow it to buy Russian hardware such as tanks, armoured vehicles and possibly military helicopters.

Under Putin, Russia has sought to revive relations and deepen its influence in Latin America, particularly with countries wary of U.S. influence such as Cuba where friendly ties with Moscow date back to the Soviet era.

Deputy Finance Minister Sergei Storchak said a Cuban military delegation would visit Russia in two weeks when he expected a loan-for-hardware deal to be signed. Russian news agencies reported that Cuban Defence Minister General Leopoldo Cintra Frias would be part of the delegation.

“Work (on the loan) is continuing,” Storchak told reporters after Putin’s talks with Cuba’s president.

“Nobody has refused anyone anything. There is such a theme and there is such a loan. It’s just that there are some parts of it which have yet to be agreed.

… The Cubans plan to visit with a professional delegation and I think that we will sign the agreement during their trip,” said Storchak, saying he expected that to be in two weeks.

Kommersant had cited an unnamed source in Russia’s military-industrial complex as saying that Cuba was looking to modernise Russian equipment it already operates and to acquire new hardware too.

Another source told the newspaper he believed the Cubans were also interested in buying light arms from Russia.

Putin told a news conference with the Cuban president that Russia would build a ground station in Cuba that would allow the island nation to tap into Russia’s Glonass global navigation satellite system, Moscow’s answer to the GPS system.

He said Moscow was ready to help Cuba modernise its infrastructure too, including its rail network.

Diaz-Canel, on his first official visit to Russia since taking office, invited Putin to visit Cuba next year.

In a joint statement after their talks, the two men called on the United States to reconsider its intention to withdraw from a Cold War-era nuclear arms treaty, saying the move would be detrimental for international security.

Washington has said it wants to quit the Intermediate-Range Nuclear Forces arms treaty and has accused Russia of violating it, something Moscow denies.

The joint statement also criticised U.S. foreign policy, what it called Washington’s interference in the affairs of other countries, and the practice of using sanctions to try to destabilise other nations.