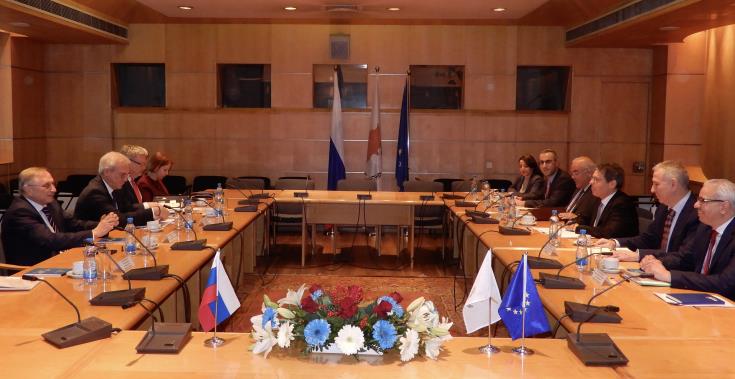 The excellent level of bilateral relations between Cyprus and Russia was reconfirmed during consultations in Nicosia, on Friday, between Russian Deputy Minister of Foreign Affairs responsible on relations with EU states Alexander Grushko and the Foreign Ministry`s Permanent Secretary Minas Hadjimichael.

“During the consultations the bilateral relations between the two countries was reviewed and their excellent level was reconfirmed, as well as the cooperation in the context of international organisations between the Republic of Cyprus and the Russian Federation,”  a Foreign Ministry press release issued here today says also noting that the consultations took place in the framework of the established dialogue between the two countries.

It is added that Hadjimichael informed Grushko on recent developments as regards the ongoing efforts for the resumption of talks for the settlement of the Cyprus problem.

Cyprus has been divided since 1974, when Turkey invaded and occupied its northern third. Repeated rounds of UN-backed peace talks have so far failed to yield results. The latest round of negotiations, in July 2017 at the Swiss resort of Crans-Montana ended inconclusively.

The Cypriot official thanked Russia for its long-standing support of Cyprus` efforts and underlined “the importance Cyprus attaches to the support offered by Russia, as a UN Security Council permanent member.” Particular reference was made to the process for the renewal of the UN peacekeeping force`s mandate in Cyprus expected to take place in January.

They also discussed matters of an international interest such as the situation in Syria and EU – Russian relations. The Foreign Ministry`s Permanent Secretary reiterated Cyprus` position that “despite any problems, communication channels between the two parties should remain open, a position that the Republic of Cyprus expresses consistently within the EU.”

By In Cyprus
Previous articleJob vacancy rate both in Cyprus and the Euroarea rises to 2.1% in Q3 2018
Next articleHouse Plenary approves 2019 state budget