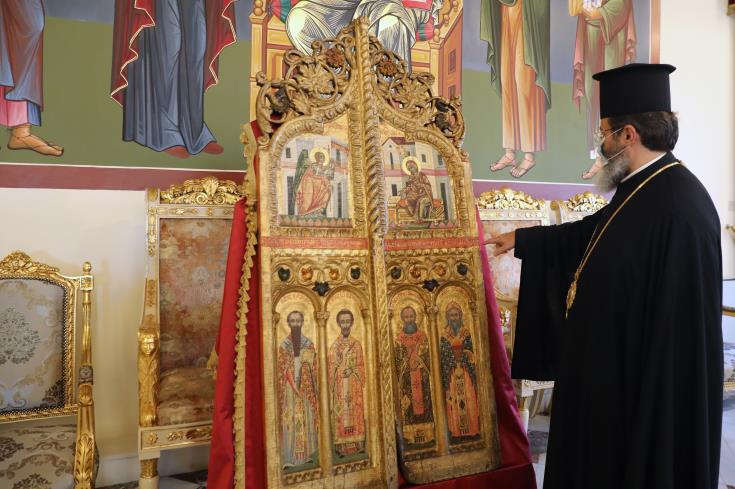 The message that no matter how many years go by, the Republic of Cyprus will continue to hunt looters who stole works of cultural and religious significance from Turkish occupied north of Cyprus, was conveyed during a ceremony on Thursday where the Antiquities department handed over to Archbishop Chrysostomos the Royal iconostasis Doors of Agios Anastasios in the Turkish occupied Peristeronopigi village.

The ceremony was held a few hours before the festive Vespers for the feast of St. Anastasios of Cyprus at the Grand Synod of the Holy Archdiocese of Cyprus.

Archbishop Chrysostomos expressed his gratitude to all those involved in returning the Royal Doors and wished that they will be placed soon in the church of the saint, in Famagusta, once it is freed from Turkey.

He also announced that within a few days several holy artefacts will arrive at the Holy Archdiocese, most of which concern icons, which were located in the Offices of the Church of Cyprus in Brussels which by decision of the Holy Synod will cease to operate there. The icons were obtained by the Church at various auctions overseas and some are older, dating from the 17th and 18th centuries, but also some of the early 20th century.

Foreign Minister Christodoulides said feelings were mixed, on one part sadness over the destruction, looting and trading of thousands of cultural artefacts seized from the Turkish occupied north by Turkish looters but at the same time satisfaction because after many years of coordinated efforts of all the competent Cyprus government services and the Church of Cyprus, “we managed to return to our homeland these unique works of art and religious symbols of the Church of Cyprus.”

We wish and hope that the Royal Doors will be able to be returned to the church of Agios Anastasios at Peristeronopigi in Famagusta, in a reunified Cyprus, without occupation troops. Our efforts continue until er achieve the aim, he said and reiterated the state’s readiness to work until all religious artefacts and cultural heritage works stolen, return to Cyprus

Transport, Communications and Works Minister Yiannis Karousos said the Department of Antiquities fought hard to repatriate the Royal Doors and after many years, they were repatriated from Japan.

The repatriation of cultural and religious artefacts looted and stolen after the invasion send a message of hope and optimism for Cyprus, the minister added.

Director of the Antiquities Department, Ieronimidou, said the case of the Royal Doors from Agios Anastasios was the first of its kind from the Asian continent and it looked almost impossible some years ago.

However, after the opening of the embassy of the Republic of Cyprus in Tokyo efforts with all interested services involved, including the Church of Cyprus intensified and yielded results. The church of Agios Anastasios was about to be declared an ancient monument right before the 1974 Turkish invasion together.  with other churches in the occupied areas. It was decided to promote go ahead anew with this effort, along with other churches that are located in the occupied areas, “thus making substantial moves to protect the cultural heritage of our occupied territories”.

Metropolitan Dr. Vasilios, head of the diocese of Constantia – Famagusta in Cyprus, said that at a time when there is so much talk about art and its value, the Royal Doors are a genuine work of art and have preserved their timelessness because they convey the deep sense of culture and values of the inhabitants of Cyprus.

President of the Peristeronopigi Association, George Georgiou, referred to the efforts to repatriate the Royal Doors and expressed the hope that soon they will return to the church of Agios Anastasios where they belong.