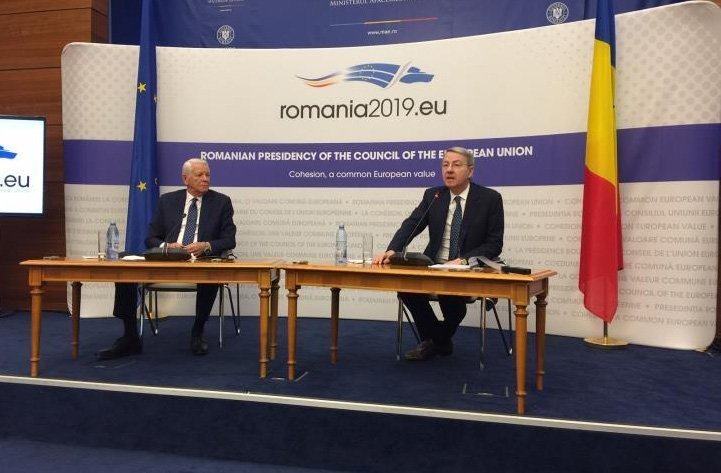 The Romanian EU Presidency is open to cooperate closely with the Cypriot side in order to identify the best solutions for the continuation of the EU-Turkey dialogue, which is in everyone’s interest, the Chargé d’ affaires of Romania to Cyprus, Daniela Sezonov-Tane, has told the Cyprus News Agency (CNA).

In an interview to CNA, Tane noted that “we need to build up a reasonable and predictable relation with Turkey, given its status as a key European and euro-Atlantic partner.”

She underscored the importance of upholding peace and security in and around Cyprus and the Eastern Mediterranean, stressing at the same time that “Cyprus should be able to exercise its sovereign rights, exploring and developing its off-shore resources, which should be equitably shared between both communities once an overall settlement is achieved.”

Referring to the Cyprus problem, Tane said that “we are fully supporting a solution according to the international law and the relevant UN Security Council resolutions.”

Asked about Brexit, Tane noted that the withdrawal of Britain from the EU without an agreement could have serious consequences.

“Throughout the process of negotiations, the EU27 have proved that they are open to the identification of a suitable solution for both sides. The EU27 position confirms that the negotiated agreement is equilibrate and respond appropriately to the concerns of both sides,” she noted.

Tane said that the main objectives remain maintaining the unity of the EU27, as well as preparing European citizens and companies for a smooth transition towards an EU of 27 member states. She noted that ensuring clarity and transparency in this process and compliance with the EU Treaties is also essential.

She said that the Romanian EU Presidency “will analyse the suitable proposals together with the EU institutions and the member states,” underlining that any action will take place under EU approaches and under the principles agreed at the EU27 level.

According to Tane, the other major challenges during the Romanian Presidency have to do with the high number of pending files, reflecting the key priorities for the Union and its citizens.

“We need to advance with the legislative process, there are some 240 proposals advanced by the Commission to be adopted until 18th of April, given the fact that we are at the end of the current institutional cycle, and EU parliamentary elections will be held at the end of May,” she noted.

Tane said that probably the most challenging file to deal with is the Multiannual Financial Framework (MFF) negotiations, “which is a flagship file for our Presidency. We will make all the efforts to prepare the ground for a timely agreement on the next MFF. We need a future European budget to be a reflection of how we see the EU in the future, equally balanced and well calibrated to the realities faced daily by our citizens,” she noted.

Asked about the priorities and goals of the Romanian EU Presidency, Tane said that ‘Cohesion, a common European value’ is the motto of Romania’s EU Council presidency, adding that this concept covers many of the realities of the moment, which have to be accommodated at European level.

We consider that the EU policies should be more in line with the principle of cohesion among member states, among regions and citizens, she noted.

Tane said that convergence, safety, ‘Europe as a stronger global actor’ and ‘Europe of common values’ are the four pillars on which Romania’s EU Council Presidency rests. We need to enhance the cohesion on political actions, but also the economic and the social dimension of the concept of cohesion need to be taken into consideration, she stressed.

The Romanian diplomat noted that the main objectives Romania put forth under the pillar Europe of convergence include: taking forward the negotiation process on the 2021-2027 Multiannual Financial Framework; developing the EU social dimension through the enforcement of the European Pillar of Social Rights; advancing the EU agenda in the economic and financial fields; and promoting research and innovation, digitalization and connectivity, in order to increase the competitiveness of the European economy and industry.

She noted that a democratic, fair and tolerant Union is the core foundation of the European project. “At the same time, advancing on the European project should be done through a united, inclusive and open approach for all member states. There cannot be divisions throughout the Union and this is a key message to reinforce citizens’ trust,” Tane said.

Tane assured that “we will act as a genuine and honest broker in order to find solutions that enable progress on the European agenda.”

Furthermore, she noted that the calendar of the Romanian Presidency of the Council of the European Union comprises a significant number of meetings and events, both at high level and at technical level, that will take place in particular in Brussels, Luxembourg, Strasbourg and Bucharest.

“Approximately 1,700 technical meetings and 40 meetings of the EU Council at ministerial level are scheduled to take place in Brussels. At the same time, we will host, besides the Leaders’ Summit in Sibiu on 9 May 2019, 288 meetings and events in Romania, out of which 22 informal ministerial meetings in Bucharest, 98 high-level officials’ meetings, 68 expert meetings and 99 conferences. Various actions and events as well are foreseen in the capitals of the EU Member States as well as of third countries, where Romania will ensure local representation of the European Union,” she said.

Asked about Romania’s position vis-à-vis Turkey’s EU accession course, the fact that Turkey does not recognize the Republic of Cyprus and still occupies 37% of the island’s territory, while at the same time it acts provocatively in the Mediterranean, questioning Cyprus’ sovereign rights within its Exclusive Economic Zone, Tane said that Romania will play the role of the facilitator to reach consensus on the EU-Turkey file.

“We are open to cooperate closely with the Cypriot side in order to identify the best solutions for the continuation of the EU-Turkey dialogue, which is in everyone’s interest,” she stressed.

She went on to say that “we need to build up a reasonable and predictable relation with Turkey, given its status as key European and euro-Atlantic partner.”

“We shall not forget that the European perspective offers to the pro-European Turkish citizens hope and confidence in future. The EU needs to have a constant dialogue with Ankara, to ensure stability and security in the Black Sea Region and in the Eastern Mediterranean,” she said.

Moreover, she noted that “we consider of outmost importance to maintain open the European perspective of Turkey also to counterbalance Russian presence in the region.”

As regards the Cyprus problem, Tane said that “we are fully supporting a solution according to the international law and the relevant UN Security Council resolutions.”

“Romania will always back Cyprus’ position and the application of the international law in this regard”, she noted, and underlined the importance of “upholding peace and security in and around Cyprus and the Eastern Mediterranean.”

Moreover, she stressed that “Cyprus should be able to exercise its sovereign rights, exploring and developing its off-shore resources, which should be equitably shared between both communities once an overall settlement is achieved.”

She went on to say that “we praise the efforts of the United Nations Secretary General which has been facilitating the talks between the Greek Cypriot and the Turkish Cypriot leadership, with a view that to achieve a bi-zonal, bi-communal federation, at the earliest possible time.”

Asked about the bilateral relations between Cyprus and Romania, she said that the two countries enjoy very good relations in all fields, and have often similar positions in the EU fora.

“On a bilateral level, our political dialogue had been enhanced in the past 14 months, through the bilateral consultations held between our foreign ministries in November 2017 and November 2018, at deputy minister level. We have very good economic relations, with the potential to further develop them,” she noted.

She stressed the prospects for further developing cooperation in the tourism sector, noting that some 50.000 Romanian citizens visited Cyprus in 2018.

“Last, but not least, we have quite a big community of Romanians living and working in Cyprus, which have learned your language and have integrated in the Cypriot society. This is a very good starting point for closer contacts and a better mutual knowledge of our people,” Tane said.

“We need to organize joint cultural and educational programs, exchanges of youth groups and of teachers, for further developing our dialogue and cooperation,” she added.

Asked if Romania favours its participation in a Trilateral Cooperation scheme with Cyprus and Greece, Tane replied in the affirmative, noting that one of the fields of this cooperation might be diaspora, an idea recently advanced by Cypriot Presidential Commissioner Photis Photiou, who recently visited Bucharest, and signed a bilateral Memorandum of Understanding for cooperation on diaspora affairs.

The energy sector could also be an option of cooperation, she noted, adding that in November last year “we also signed a bilateral MoU for cooperation in the field of energy.”

Cyprus, an EU member state since 2004, has been divided since 1974, when Turkish troops invaded and occupied 37% of its territory.