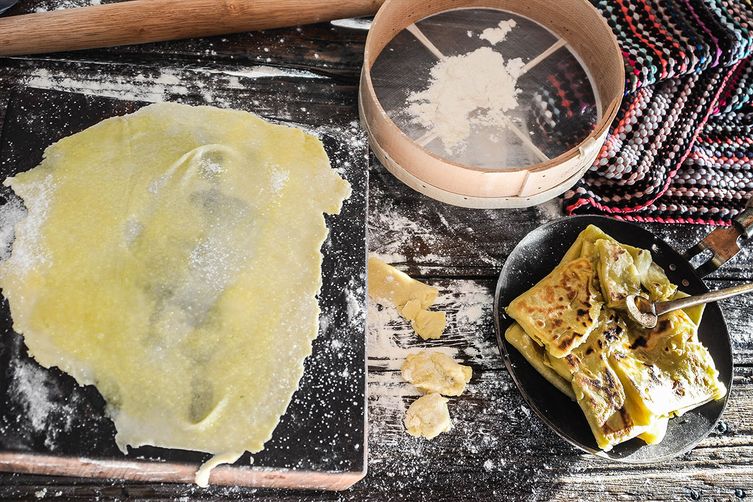 Kattimeri, a great snack food nevertheless, is more like a traditional version of crepe, made in Cyprus.

-Sift the flour and put salt.

-Pour the oil and start to rub it with your hands until you make thick crumbs –Then, add a little bit of orange juice and then water.

-Knead until you get a soft dough.

-Cover the bowl with a plastic film and allow the dough to rest for 30 minutes.

-Meanwhile, prepare the syrup- Put all the ingredients in a saucepan and boil for 10 minutes.

-Stir the cinnamon with sugar.

-Divide the dough into 4 parts. Take a piece and open it with the roller in a rectangular shape.

-Brush with a little oil and a lot of vegetable cream.

-Then sprinkle the almonds and wrap the sheet in a roll.

-Then turn it and put it round in the baking pan, starting from the middle and wrapping it outwards.

-Brush the “kattimeri” with a large amount of cream and sprinkle with the rest of the sugar and almonds.

-Bake in the preheated oven for about 1 hour or until it is reddish.

-Pour the cold syrup over it and then serve.

By In Cyprus
Previous articleEstrella Limassol
Next articleThe Mall of Cyprus