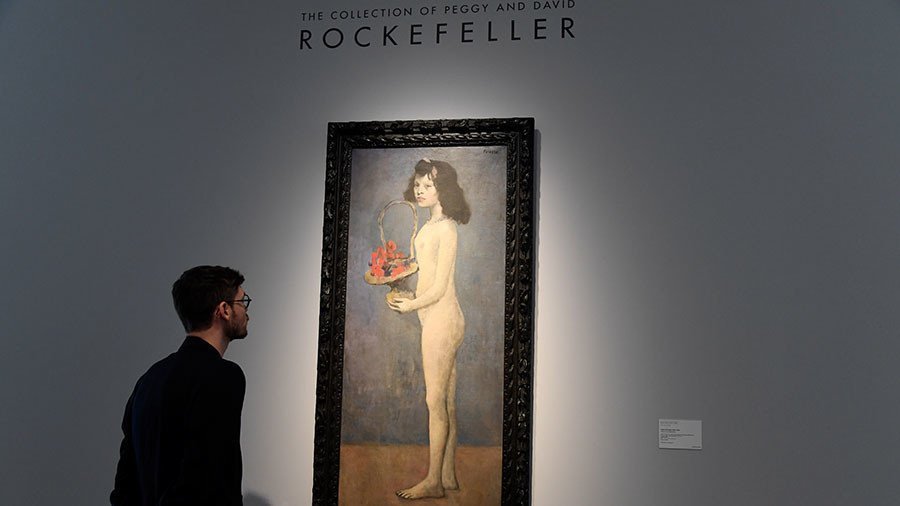 The three-day auction of Peggy and David Rockefeller’s art collection set 22 world records at Christie’s in New York. The priciest single-owner collection ever well exceeded initial expectations.
All of the more than 1,500 lots have been sold, fetching a total of $832 million. That’s about twice the previous record of $484 million from a 2009 Paris sale of designer Yves Saint Laurent’s estate.

Buyers were lured by the Rockefeller name, which represents American success, Christie’s said. The sale set records for seven artists and items including a porcelain set and a swan decoy.

Picasso’s painting of a nude girl holding a basket of flowers was the top sale. It went for $115 million, against a pre-auction estimate of $100 million. A Monet painting of his famed water lilies sold for $84 million, surpassing the previous $81 million high for the artist.

The most significant charity auction ever staged, The Collection of Peggy and David Rockefeller totals $832.6 million the highest ever total for a single collection https://t.co/xQFiXIQ86c pic.twitter.com/Jrn7IceILL

A Matisse work depicting a woman in a Turkish harem went for a record $80.8 million, topping the previous $48.8 million for the artist.

Pieces of opulence surrounding the late Rockefeller couple, such as cufflinks, jewelry, and money clips, as well as furniture, porcelain, and ceramics, were also auctioned.

“This week of auctions has exceeded our expectations in so many ways. Christie’s and our family had a shared financial goal of raising more than $500 million in estate proceeds for the 12 philanthropies our parents cared about so deeply, and it has been both humbling and deeply gratifying to see a sale total that reaches so far beyond that,” David Rockefeller Jr. said.

According to Christie’s, sale registrants (including the online sale) came from 53 countries. The buyer geography of the sales was led by the Americas (73 percent), followed by Europe, the Middle East, Russia, and India (18 percent combined), and Asia (10 percent).

Proceeds from the auction will be donated to charity, the Rockefeller family said.

Peggy Rockefeller died in 1996, and David Rockefeller in 2017. He was the last surviving grandson of oil baron John D. Rockefeller.