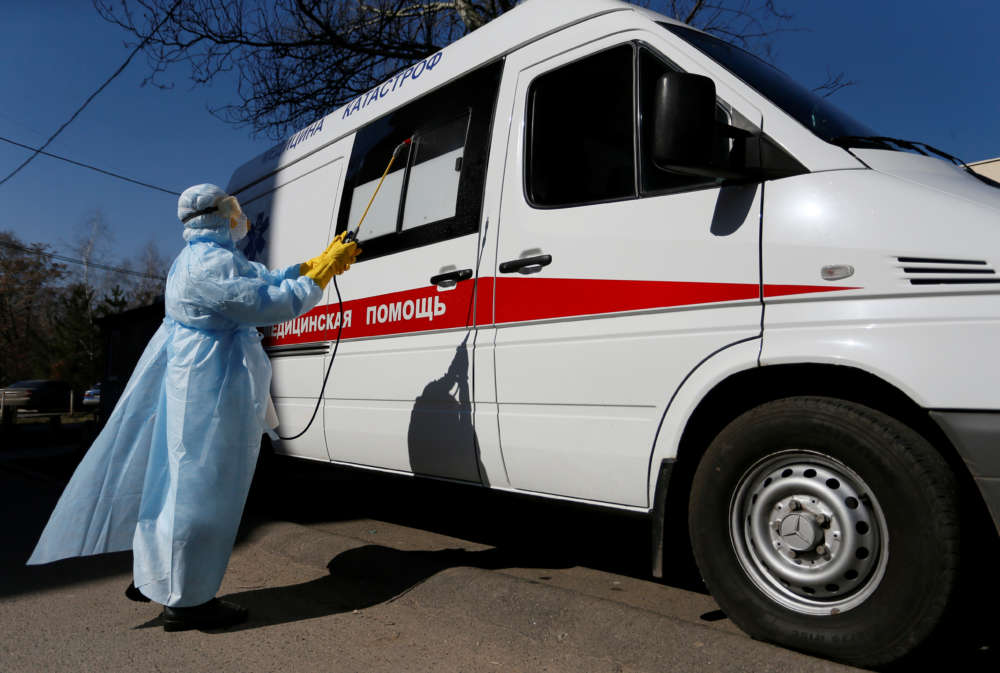 Ukrainian shops, restaurants and transport shut down on Tuesday as the country tightened restrictions to contain the spread of the coronavirus, while police arrested five people suspected of trying to rob 100,000 surgical masks at gunpoint in Kiev.

The country has seven confirmed cases of the coronavirus so far, including one death. The government has encouraged people to stay at home wherever possible except to buy food and medicine, but has stopped short of introducing curfews.

Following a series of emergency steps introduced by President Volodymyr Zelenskiy, parliament in a special session on Tuesday approved measures including fines and prison sentences for people who broke mandatory quarantine.

The economic fallout from the epidemic also continued to bite as the hryvnia currency slipped to 27 to the dollar for the first time since June 2019.

The central bank said it would not impose foreign currency restrictions and added it had $25 billion in reserves to continue market interventions.

Nevertheless it warned of an economic hit on Ukraine, which is still fighting a simmering conflict against Russian-backed forces in the eastern Donbass region that has killed more than 13,000 people since 2014.

In Lviv, a picturesque city of cobblestone streets in western Ukraine that is popular with tourists, restaurants and cafes closed and supermarket attendants wore masks and gloves while working at the tills.

“Of course, no one is happy about the restaurant shutdown,” said Mark Zarhin, the owner of a restaurant chain.

“It is like a perfect storm in Lviv. We face both ‘plague’ and war today. It is the worst. But it’s not the fact that we close the restaurants that is bad, but the fact that we don’t know for how long. We cannot predict anything.”

The nationwide shutdown will include the closure of the Chernobyl area, the site of the world’s worst nuclear disaster in April 1986 that has since become a visitor attraction.

Kiev’s main airport was mostly empty after the government banned passenger flights to and from the country, and announced a shutdown of domestic air travel from Wednesday.

The authorities also announced the arrest of a group of people who, initially posing as members of the state security service, stole a stash of 100,000 surgical masks at gunpoint from a private seller who had stored them in his car.

“Instead of negotiating the purchase and sale conditions, the criminals attacked (the seller), took the masks and beat the man,” Kiev police chief Andriy Kryshchenko said. “Wearing police uniforms and threatening to use firearms, the criminals took possession of the whole batch of goods.”