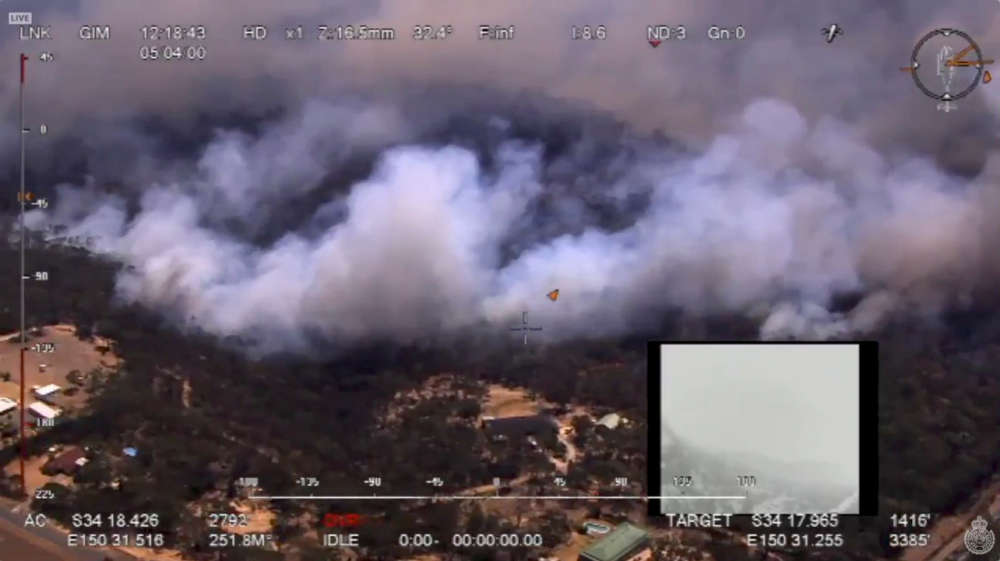 Australia’s most populous state declared its second emergency in as many months on Thursday as extreme heat and strong winds stoked more than 100 bushfires, including three major blazes on Sydney’s doorstep.

A day after Australia recorded its hottest day on record, thick smoke blanketed the harbour city, shrouded the Opera House and brought many outdoor activities to a halt.

The state of emergency declaration gave firefighters broad powers to control government resources, force evacuations, close roads and shut down utilities across New South Wales, which is home to more than 7 million people.

Authorities said nearly 120 fires remained ablaze by late afternoon, more than half of which are uncontrolled, and with temperatures forecast to top 45 degrees Celsius (113°F) in some areas, officials warned residents to be on high alert.

“The firefront has been spreading very quickly and intensely,” NSW Rural Fire Service (RFS) Commissioner Shane Fitzsimmons told reporters in Sydney, adding that two firefighters had been airlifted to hospital with burns to their faces and airways. “It’s still a very difficult and dangerous set of circumstances.”

Days out from Christmas, a time when many Australians head to the coast for the holidays, NSW Premier Gladys Berejiklian advised people to make sure “you are prepared to change your plans should circumstances change.”

“There is a large amount of smoke looming over the city, which shows how close the fire is,” Findley told Reuters by telephone. “It is extremely hot and windy now so we are all worried the fire could spread. People are really worried that they may lose everything.”

The RFS posted footage on its official Twitter account showing firefighters tackling one of the three blazes ringing Sydney. A waterbomber aircraft was dwarfed by thick grey and black billowing cloud as it attempted to douse flames in bushland just metres away from homes.

Australia has been battling wildfires across much of its east coast for weeks, leaving six people dead, more than 680 homes destroyed and nearly 3 million acres (1.2 million hectares) of bushland burnt. Berejiklian said as many as 40 homes had been destroyed on Thursday.

Australia on Wednesday broke all-time heat records for the second day running, with maximum temperatures reaching an average of 41.9 degree Celsius, the Bureau of Meteorology said.

Some 1,700 firefighters have been deployed across NSW, but officials warned that was still not enough to cover every potential danger and urged people in high risk areas to evacuate while it was still safe to do so.

The current state of emergency will last for seven days, while a total fire ban that has been in place since Tuesday will remain until midnight on Saturday.

The major fires around Sydney, which is home to more than 5 million people, have resulted in days of heavy pollution in the city usually known for its sparkling harbour and blue skies.

One megafire in the Kanangra Boyd National Park to the city’s southwest had crept to the very outskirts of Campbelltown, a suburb of 157,000 people.

By late afternoon, Sydney was sitting at No.4 on the IQAir AirVisual live rankings of pollution in global cities, above Dhaka, Mumbai, Shanghai and Jakarta.

Many commuters have donned breathing masks in recent weeks as air quality has plunged to hazardous levels not previously seen in the city.

NSW Ambulance Commissioner Dominic Morgan said the service had experienced a 10% surge in call-outs for patients suffering respiratory conditions over the past week and urged susceptible people to remain indoors and keep their medication close.

Prime Minister Scott Morrison has weathered a storm of criticism on social media in recent days for going on an overseas holiday during the emergency, adding to criticism that his government is failing to deliver adequate climate change policies.

As local media reported Morrison was in Hawaii on a family holiday, about 500 protestors gathered outside his official Sydney residence to demand urgent action on climate change. Morrison’s office refused to confirm his whereabouts.

One protestor, wearing an Hawaiian shirt, carried a sign reading, “ScoMo, where the bloody hell are you?” referencing the leader’s nickname and a decade-old international advertisement for Tourism Australia that was banned in several countries because the language was deemed offensive.

“It was particularly disappointing to see our Pacific cousins in Australia actively standing in the way of progress at a time when we have been watching in horror as their own country is ablaze,” Marshall Islands president Hilda Heine said in a statement on Wednesday.

By In Cyprus
Previous articleAngelides: German Defence Minister to promote implementation of EU decisions on Turkey
Next articleNew types of entrepreneurship