Rights of Britons in Cyprus and Cypriots in Britain protected after Brexit, High Commissioner says 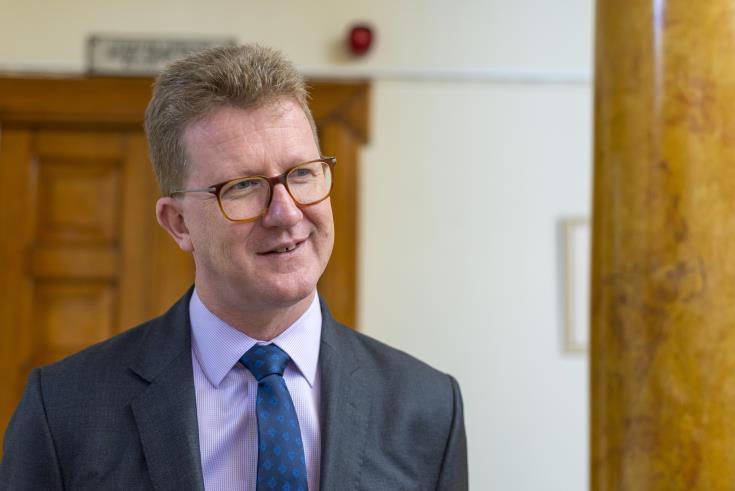 British High Commissioner in Cyprus, Stephen Lillie, said on Thursday that under UK`s withdrawal agreement with the EU, the rights of Britons in Cyprus and all over the EU, as well as the rights of Cypriots in Britain are protected, and after Brexit they will continue to live and work and access public services, health services, just like they do now.

In statements after a meeting he had with Limassol Mayor, Nikos Nikolaides, and invited to say if Brexit will influence the relations between Britain and Cyprus, Lillie said: “Not at all. We are very pleased that Britain and the EU have reached an agreement on the future relationship and our departure from the European Union. That is a positive development.”

“And that is especially true here in Cyprus. We have incredibly strong links between Britons and Cypriots, between our businesses, between our educational institutions and the new agreement will ensure that that will continue.”

To a remark by a journalist that the agreement says that nothing will change for the 11,000 people leaving in the British Bases in Cyprus, Lillie said that “what we have done with the agreement is, we have protected the rights and interests of the Cypriots who live and work in the bases and that is a good thing, their rights are protected.”

He recalled that “we have the agreement we signed in 2014 with the Republic of Cyprus to allow more economic development in the Bases and that is not affected by Brexit. Currently we are having very good discussions with the government here on how we can get on and implement that agreement,” Lillie added.

Asked about the British citizens living in Cyprus, Lillie said that “their rights will be protected”, adding that this afternoon he would be meeting with British living in Limassol and answer their questions.

Invited to comment on threats launched by Turkish President Recep Tayyip Erdogan with regard to drilling in Cyprus` Exclusive Economic Zone involving the British flag drill ship Stena Icemax, the High Commissioner said that “our position on developments on hydrocarbons in the Cyprus EEZ is very clear. It is very well known that we support the right of Cyprus to exploit the hydrocarbons in its EEZ, and we hope all people of Cyprus will benefit from that,” he noted

President of the Republic of Cyprus Nicos Anastasiades has welcomed the achievement of the agreement in principle between the United Kingdom and the European Union on the text of the withdrawal agreement of the UK from the EU, as well as the outline of the political declaration on the future relationship, and expresses satisfaction with the final result, which secures the continuation of the acquis communautaire in the areas of the Sovereign British Bases in Cyprus.

In a written statement, President Anastasiades said that “the withdrawal of the UK from the EU is one of the greatest challenges the EU has faced in its long history, and has been addressed with the display of unity and solidarity among the 27 member states.”

“I express my satisfaction over the fact that the withdrawal agreement will allow the smooth and orderly withdrawal of the UK from the EU, offering the necessary legal assurance to the European citizens and enterprises,” he notes.

He adds that “an equally important fact is that the withdrawal agreement paves the way for determining the future relationship of the EU with the UK,” noting that “the Republic of Cyprus, which maintains close historical, economic and social ties with the UK, wishes the closes possible relationship to the benefit of the two countries, and will strive within the Council in this direction.”

“The withdrawal agreement involves, as an integral part, a protocol on the British Bases in Cyprus, after many months of negotiations between the Republic of Cyprus, assisted by the European Commission, and the UK,” he says.

President Anastasiades expresses “full support to the final result, which secures the unobstructed continuation of the implementation of the acquis communautaire in the areas of the Bases, the specific sectors provided for in Protocol 3 of the Accession Act of the Republic of Cyprus to the EU.”

“I am absolutely convinced that through arrangements agreed on in principle, the new Protocol will fully safeguard the legal rights and interests of the Cypriot and European citizens living and working in the British Bases, as well as those of the Republic of Cyprus itself, with the continuation of the acquis in the British Bases, which was right from the start a primary objective of the government,” he concludes.