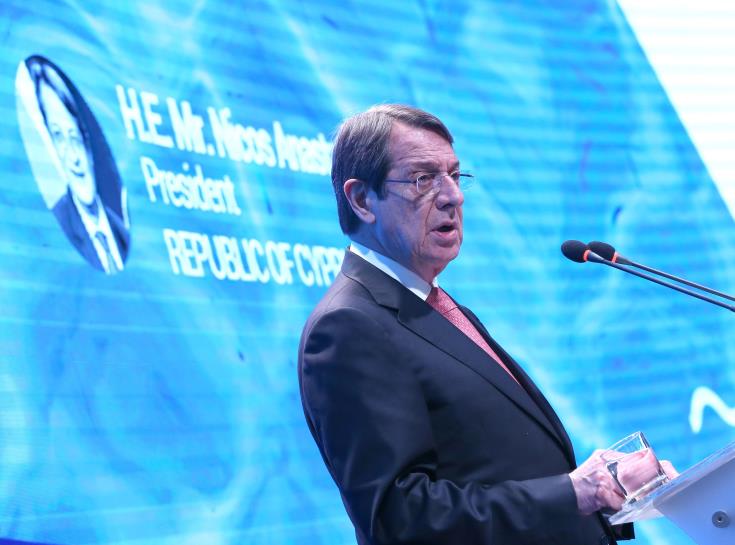 Revenue from ship management companies in 2018 reached €1.034 billion, President of the Republic Nicos Anastasiades has stressed, noting at the same time that the discovery of significant quantities of hydrocarbons in Eastern Mediterranean region generates new opportunities for Cyprus’ shipping industry.

In his address at the “Maritime Cyprus 2019” Conference which is being held in Limassol, President Anastasiades said that “this year marks a significant milestone: The 30th anniversary of the Maritime Conference”.

He said that “the success that the Conference enjoys throughout all these years, is a testament of the recognition the Cyprus shipping industry enjoys among the International Shipping community and the mutually beneficial partnerships we have established with global shipping stakeholders”.

We are very proud of the achievements of Cyprus’ Shipping which has been firmly established as one of the most qualitative, modern and complete international shipping centres, ranking 11th worldwide and 3rd in Europe in ship registries. https://t.co/UfKgRE7t7a

President said that “we are very proud of the achievements of Cyprus’ Shipping which has been firmly established as one of the most qualitative, modern and complete international shipping centres, ranking 11th worldwide and 3rd in Europe in ship registries”.

Moreover, he noted, “ as a third-party ship management centre, Cyprus is the largest in Europe and one of the leading ones globally”.
At the same time, President continued, “we have been effectively implementing the relevant internationally applicable safety, security and environmental protection standards, whilst ensuring that the national measures are continuously enhanced, thus; Providing a stable and friendly environment for shipping companies covering a large spectrum of activities and services”.

He stressed that “Cyprus shipping has proven to be an invaluable asset for our economy and has proven catalytic particularly in recent years towards the steady recovery of our economy, acting not only as a gateway of foreign investments, but also as an export destination for ship management services”.

In this regard, he added, “ further consolidating and enhancing the competitiveness of our flag and maritime cluster remains one of the most important priorities of the Government”.

It is for this reason, he went on to say, “that in March 2018, the Government established a Shipping Deputy Ministry in order to meet existing and future challenges arising from regional and geopolitical developments, through a well-structured and co-ordinated strategic plan”.

Since the creation of the Shipping Deputy Ministry, President said, “a number of initiatives have been undertaken with the aim to tangibly improve Cyprus’ shipping administration.

President said that “we have introduced an updated pricing policy which simplifies and streamlines the fees relating to the Cyprus’ Registry of Ships, whilst abolishing initial registration fees for ocean-going vessels”.

He said that “our policies have yielded positive results” noting that “ the revenues from Ship-management companies in 2018 reached €1.034 billion, compared to €948 million in 2017, recording an increase of 9%”.

President also stressed that “the gross tonnage of the Cyprus Ship Register has increased to almost 24.5 million gross tons, the highest figure recorded since the introduction of our tonnage tax system back in 2010”.

Since the creation of the Deputy Ministry, he added, “the number of shipping companies under the tonnage tax system has increased from 168 to 215”.

“We have also had an increase in the companies operating in the wider maritime sector”, he said, adding that “a number of further measures are also in the pipeline and are expected to be adopted in the immediate future”.

These include, as he noted, updating and reinforcing our competitive shipping taxation framework, as well as implementing a holistic strategy for Blue Growth, including a detailed Marine Spatial Planning project.

President Anastasiades also stressed that “the discovery of significant quantities of hydrocarbons, not only in Cyprus, but in the wider Eastern Mediterranean region generates new opportunities for our shipping industry to further evolve and widen its horizons by establishing synergies with the energy sector and relevant auxiliary services”.

He also said that “modern maritime training constitutes an essential element in the further progress and expansion of the Shipping Industry”.

To this end, President said, “these past few years three maritime academies have been established in Cyprus, with more than 300 students currently studying at these, supervised by the Shipping Deputy Ministry”.

“The Government offers many incentives to encourage blue careers, such as scholarships and grants for the on-board training of EU students at the Cyprus maritime academies,” he added.

In the area of innovation, he said that “Cyprus is planning to establish a research and technology centre of excellence, the Cyprus Marine and Maritime Institute.

“The Centre has already attracted a funding of over €40 million from the Government, the EU and the Cyprus shipping industry and is collaborating with universities and institutions from all over the world, including the USA, Israel, UK and Ireland,”the President concluded.