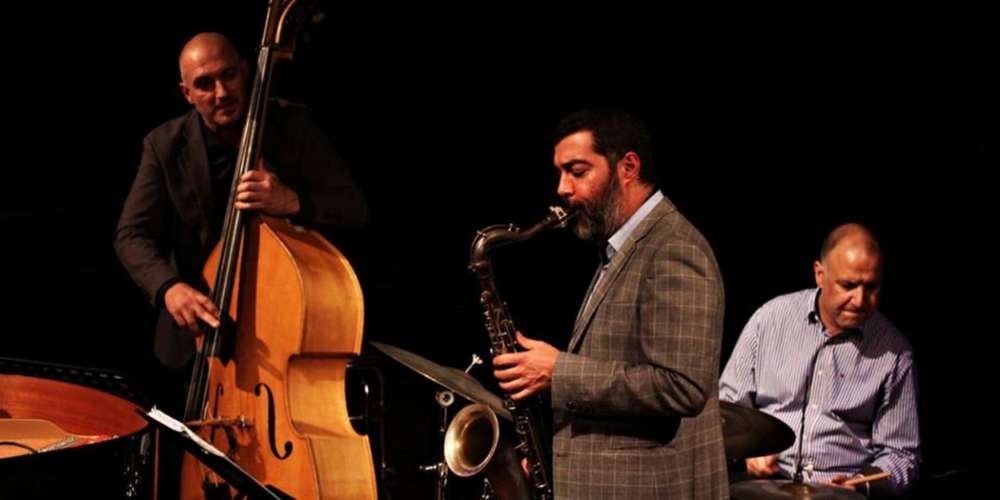 As the years are passing by, and after many years of collaboration and friendship, the three experienced and well-known jazz artists, Ioannis Vafeas (drums), Michael Messios (double bass) and Charis Ioannou (saxophone), join forces again in a trio setting. Enjoy the band at Technopolis 20, in an acoustic jazz sound and in a repertoire that comes from the golden period of jazz – late 40’s through the 60’s, on Friday, 22nd of November, at 8pm.

They are all graduates of the Berklee College of Music in Boston MA, with numerous collaborations in CDs, recordings, theatre productions and performances in various venues and festivals in Cyprus and abroad.

Ioannis Vafeas is a professional drummer and educator. He studied Jazz music at the Berklee College of Music in Boston, MA and did his master’s degree in Jazz Studies at the Boston Conservatory. The years that followed found Ioannis busy in the music industry performing, recording and teaching music. He performs regularly in major festivals, concert halls and prestigious jazz clubs all over the world. Vafeas attended festivals and Venues in Germany, Poland, England, Lebanon, Greece, Kuwait, Italy, the U.S, Serbia and shared the stage with great artists and Symphony Orchestras. He has numerous collaborations in cd’s, recordings and theatre productions. Since 2002 Vafeas is teaching Music in public schools. He’s been teaching Jazz Music at private universities in Cyprus since 2009. His credits also include drum seminars on soiling and brush playing in various universities and music schools. In April 2017 he released his first album entitled “Bridge of Locks” with the IOANNOU/VAFEAS quartet. He is the Artistic Director of the non-profit organization A. VAFEA JAZZ Projects. He is endorsing Zildjian Cymbals since 2009. www.ioannisvafeas.com

Michael Messios (Double bassist/Composer/Educator) attended the Berklee College of Music in Boston MA with a scholarship. He studied music composition, and jazz performance. His return in Cyprus found him busy in the music industry as a member in various ensembles. The Petsteppers, Charis Ioannou Trio, Cyprus big band, Tassos Stylianou Trio, where he performs and composes. He has participated in major Jazz Festivals like the Krakow Jazz Festival in Bologna, the Kuwait Jazz Festival, Mitrovica Jazz Festival in Serbia, the Crete Jazz Festival and played in prestigious jazz clubs like the VORTEX in London. In 2013 he created his own band with the name “Michael Messios Symmetry Band” which performs his compositions only. His music is influenced by Contemporary and traditional Jazz and distinguished for its strong melody, harmony, complicated rhythms and motives. Messios is an endorsing artist of the “ASHDOWN AMPS”.

Charis Ioannou (saxophone) was born in Nicosia, Cyprus in 1976. In 1997 he was enrolled at the Berklee College of Music in Boston, where he studied saxophone performance and Jazz Composition. Charis won the Woodwind Achievement Award in the last year of his studies in Boston and in 2001, after graduation, he moved to New York where he stayed for three years. While in New York, Charis earned his Master’s Degree in performance from the New York University and in the meantime performed and taught around the state. Charis left the United States in 2005 and moved back to Cyprus. The return to his homeland country found Charis collaborating with various musicians and appearing in all the major clubs and festivals around Cyprus as well as various venues around the world including performances in Greece, Kuwait, Germany, Lebanon, Kazakhstan, Poland, Serbia, Spain, England, Italy, Luxembourg, Belgium, Holland and the U.S.A. Charis has also collaborated with the American Embassy in Cyprus in a Bi-Communal Jazz program called Jazz Futures through which he has appealed all over Cyprus performing alongside the group of Ari Roland and Chris Byars for 6 years during the period 2007-2013. In 2015 he led BopCy, a quartet with all Cypriot musicians and won the 2nd place in the first Greek Jazz Competition held in Athens in the same year and appeared in Syros as part of the International Jazz Day 2015. Charis is currently teaching the saxophone and the jazz idiom at the University of Nicosia as well as making guest faculty appearances in workshops held in Italy, Lebanon and Greece and continuing to perform and record as a leader as well as a sideman in Cyprus and abroad.