Reunification would boost income by 7% in a decade, World Bank says 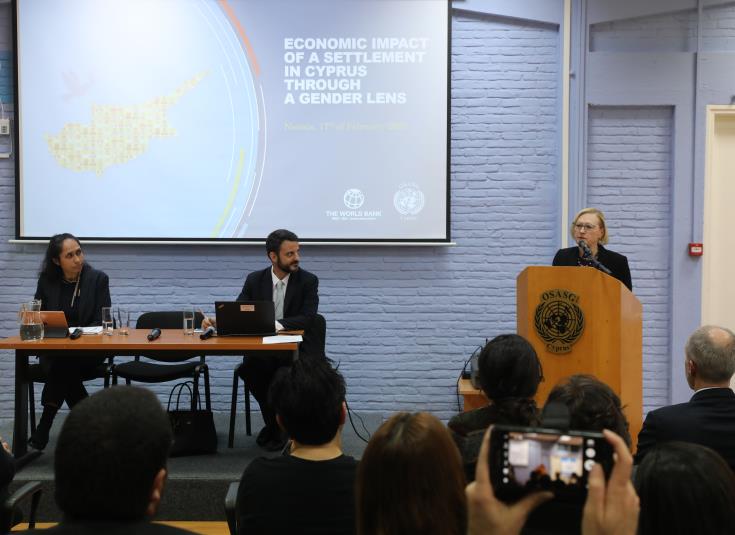 The reunification of Cyprus, divided since the 1974 Turkish invasion, accompanied by the appropriate supportive policies would see the income of both Greek Cypriots and Turkish Cypriot increase by 7% in a decade, according to a study by the World Bank.

The Greek Cypriot and Turkish Cypriot growth rate would be boosted by an annual 0.4% and 1.8% respectively following a settlement, it added.

The results of the World Bank and the UN Good Offices Mission Cyprus were made public for the first time during the launch of the outcome of a gender-sensitive socio-economic impact assessment.

“The assessment concludes that a comprehensive settlement accompanied by appropriate gender responsive policies and institutions will be an opportunity for greater economic growth to the island that can benefit women and men in both communities,” Elizabeth Spehar, UN Secretary-General Special Representative in Cyprus said addressing the event.

In contrast, she added, “the assessment underscored that for both women and men in Cyprus delaying a settlement comes at an economic and non-economic cost that inevitably accumulates over time.”

This, Spehar went on to say, “is a stark reminder to all of us that the cost of the continuation of the status quo is a serious issue to contend with”.

“This should therefore encourage us to heed the words of the UNSG who time and again has insisted on the need for the sides to engage actively and with a sense of emergency in order to reach a comprehensive settlement,” the UN’s top envoy to Cyprus added.

Answering the question why this issue is discussed now, Spehar replied “I think we need to ask ourselves if not now when? If not me, who can I trust with my future.”

She furthermore noted that in recent perception studies 7 out of 10 Greek Cypriot surveyed expressed their continued desire for a solution.

Presenting the economic aspects of a settlement, Enrique Aldaz-Caroll, a World Bank senior economist and head of the World Bank team which supported the previous round of UN-sponsored talks, said that apart from the increased growth rate for both economies and the boosted income ten years following a settlement, the income of the Turkish Cypriot community will reach 75% of the Greek Cypriot ten years following a settlement, as opposed to the 67% on the basis of the non-solution scenario.

According to the report, following normalisation of tax systems, relations and product standards, island-wide trade will increase, while G/c trade will accelerate by 3.4% on the assumption of exports of goods and services to Turkey, whereas T/C trade will increase by 12.2% via tourism and agricultural products in EU member-states.

Moreover, he added that a settlement will generate infrastructure investment exceeding €1 billion focusing on integrating water systems, energy and transport.

This should be treated as investment and not as cost of a settlement, Aldaz said.

Additionally, a settlement with the ensuing free movement of labour and capital will boost employment in the medium-term and particularly in the T/c community.

One in seven women ready to engage in the labour market

Concerning gender related issues, Reena Badinay Magnusson, also a senior World Bank economist, said that many of the aspects discussed are not new, noting that “constraints are real and may affect and limit the amount of flexibility women have and ultimately will limit the flexibility with which women have to deal with labour market changes and expanding investments.”

But she noted that there are positives signals of readiness to engage.

According to Magnusson, one in seven of both G/c and T/c women that are not working are ready to work in opportunities that may arise. “If you bring these women alone in the work force that would raise T/C female employment rate by 25% and G/C by 17% that’s massive,” she added.

“The question is will these women be ready to engage in these opportunities?” she wondered, adding that supportive policies are needed to enable these women that want to work.

On her part, Spehar said that the absence of women in the Cyprus negotiating process is a “fallacy”, but acknowledged that the gender perspective was absent from the talks.

“One of the things we can all build on is the Security Council’s request that the technical committee on gender-equality to prepare an action plan for the next round of talks which will make sure that whatever settlement proposal is finalised is gender-sensitive,” she said.

The cost of non-settlement

Aldaz highlighted the cost of non-settlement, noting that this aspect was covered by the World Bank and the UN following the failure of the latest round of talks in the Swiss resort of Crans Montana in July of 2017.

However, Aldaz highlighted the non-economic cost of a non-solution in the context of time, noting that the window of opportunity is closing concerning the pre-1974 generation.

“We are at a critical juncture. Population ageing implies that the window of opportunity is closing for the pre 1974 generation to see a settlement,” he said, adding that an estimated 1,108 dispossessed property owners die every year without restoration or compensation because of the delayed agreement and most dispossessed property owners are by now of an advanced age,” he said.

“What we’ve seen that the cost of stalemate increases with each round of negotiations because of forgone benefits,” he concluded.

By In Cyprus
Previous articleFrance determined to contribute to respect for international maritime law
Next articleRussia, France, Britain urge compliance with UNSC resolutions on Famagusta