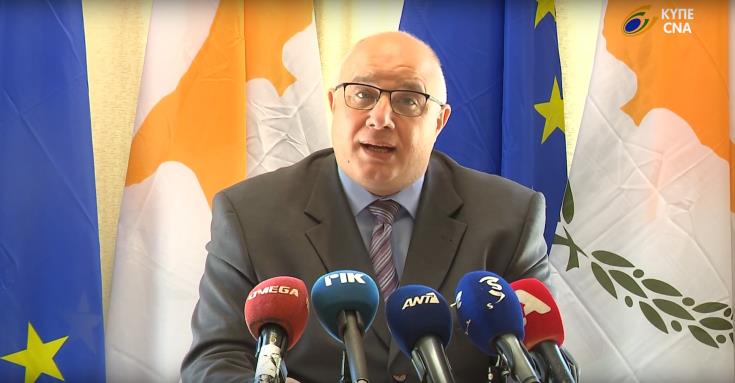 Less than two weeks before the parliamentary elections in Cyprus are due to be held, Chief Returning Officer outlined on Wednesday to representatives of electoral alliances, parties and independent candidates the election procedure, the counting and sorting of votes, he explained in which cases ballots would be deemed to be invalid and informed them of the particular conditions under which the elections will take place due to measures to contain the pandemic.

Authorities also announced that it is necessary during campaign events for attendees to wear masks, observe social distancing, have a good hand hygiene, be able to show a Safe Pass, be seated, for spaces to be well ventilated and that offering food or beverages is prohibited.

The MPs declaration ceremony will take place with the participation of a minimum number of people.

Parties chose to focus their campaign statements on the matter of the Auditor General receiving the support of the EU Court of Auditors and the Federation of Auditors on his decision to continue with a review of the citizenship by investment scheme. The Cyprus problem and the National Resilience and Recovery Plan also continued to be part of the public debate.

Cyprus President Nicos Anastasiades who was invited to comment on left wing AKEL’s references that the national resilience and recovery plan he presented on Monday was rehashed news said that it is a European plan to help member states face the pandemic’s impact and therefore is not an election promise. He also referred to an election advert by Democratic Party (DIKO) with negative connotations for his person noting that the answer was given by the people who reacted to it which forced its creators to withdraw it.

Governing Democratic Rally (DISY) party President Averof Neofytou visited the Hoteliers Association in Famagusta district, Mayors of Ayia Napa and Paralimni, expressing afterwards his optimism and conviction that people will make the right choice and vote responsibly so that the benefits of the National Resilience and Recovery Plan and the country’s stability can be realised. He also visited Famagusta General Hospital saying that the fight against the pandemic has been won and that the crisis was an opportunity to develop infrastructure in the health sector. Following a visit to Famagusta Courts, Neofytou spoke of the importance of the justice reform and the need for a parliament which will operate with responsibility as opposed to irresponsible populism. DISY also responded to criticism by AKEL and DIKO noting that the two parties’ rejection of everything and their negativity has no limits.

AKEL SG Andros Kyprianou met with British High Commissioner Stephen Lillie, urging afterwards President Anastasiades to undertake initiatives which will increase the possibility of resumption of Cyprus reunification talks and said the lack of reaction by the international community to recent unacceptable statements by Turkish President Tayyip Erdogan is worrying. Referring to a position expressed by an EU Court of Auditors contact group on the Auditor General, he noted that it is a slap in the face of the government and called on it to respect to the Auditor General’s independence and to grant him access to all the necessary files.

DIKO President Nicolas Papadopoulos reiterated his party’s proposal to establish a special parliamentary committee to oversee the distribution of funding by the National Resilience and Recovery Fund, in order for there to be transparency and accountability. He also referred to the contact group’s statement on the Auditor general expressing the view that the government “continues to tarnish Cyprus’ image as an international services hub, with damaging and possibly irreversible consequences for the Cypriot economy.”

Social Democratic EDEK President Marinos Sizopoulos who addressed an election event focused on the Cyprus problem saying that the party has submitted its proposals in time in order to deal with Turkish expansionism. They aim to shape a common Cyprus – Greece policy based on specific action in the UN and the EU, in further enhancing cooperation with neighbouring countries and in reactivating the common defence space dogma between Cyprus and Greece. EDEK also referred to the contact group’s position reiterating that all relevant documents sought by the General Auditor’s office should be handed over as soon as possible.

Citizens Alliance said that Ankara continues to attack everyone, while the great powers shut their eyes when faced with new Turkish atrocities, as Turkey continues the illegal settlement of Cyprus’ territory which it occupies illegally and by force for 47 years.

The Solidarity Movement commented on the UK’s decision to bring back the ten day quarantine measure for all people returning from Cyprus and expressed the view that it is part of the pressure placed on the government of Cyprus to accept Turkish – British plans on the Cyprus problem, otherwise the country’s epidemiological situation continues to be bad which would not correspond with statements by the Minister of Health.

Cyprus Greens, welcomed the statement of the European Court of Auditors and said that the Auditor General Odysseas Michaelides has been proven right. The party urged the government to comply with the Court of Auditors’ recommendation

Democratic Front (DIPA) President Marios Garoyian said during a campaign event that his party is proposing a realistic course offering prospects and hope in the midst of an unprecedented moral, institutional, political and economic crisis.

Animal Party Cyprus explained why it is not cooperating with green parties, noting that it represents an independent political movement for the rights of animals in the context of the international political notion on people, animals and nature for health and prosperity which is a concept greater than the “Greens”.
(CNA)