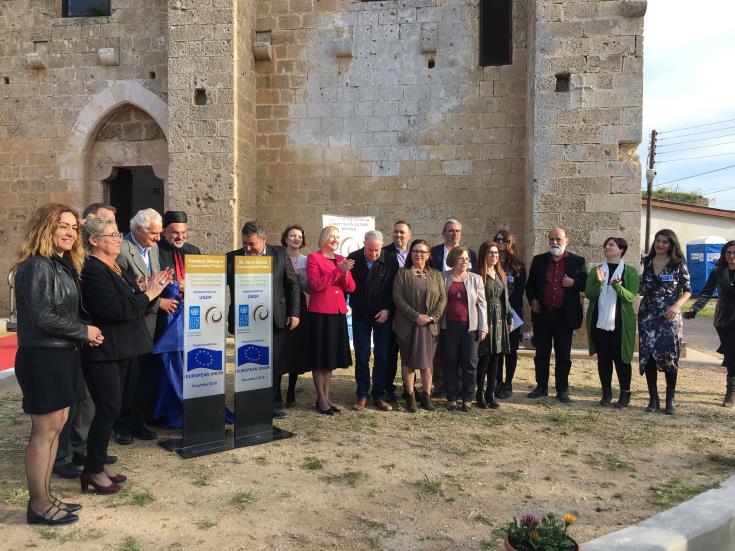 People from all over Cyprus travelled on Wednesday to Turkish-occupied Famagusta to witness a ceremony marking the completion of conservation works at the church of St. Anne and the neighbouring Tanners’ mosque and heard officials convey messages of peaceful coexistence.

Efforts to restore the two monuments in the walled city of Famagusta, close to Martinengo Bastion, started in September 2017 on behalf of the bicommunal Technical Committee on Cultural Heritage and UNDP, with EU funding. Conservators also found frescoes beneath a layer of cement, which will be uncovered in a second phase, once funding is secured.

Addressing the members of the Maronite community, Greek Cypriots, Turkish Cypriots, EU and UN officials, as well as foreign Ambassadors, Maronite Archbishop Joseph Soueif referred to the recent attack against Muslims in New Zealand mosques, noting that today’s ceremony is an answer to such horrible events.

“Our celebration here today is an answer. This is the truth, to have all the communities, all the religions living together,” he said.

The 14th century church of St. Anne was turned into a mosque after the Ottoman conquer of Cyprus and was later abandoned. “After 450 years, Maronites celebrate and pray again in St. Anne, next to Tanners’ mosque, an old Jacobine church” said Archbishop Soueif.

He thanked the Technical Committee for repairing not only monuments, but also the “hearts and memories” of people wounded by conflict in Cyprus.

Welcoming people to Famagusta, Takis Hadjidemetriou, the Greek Cypriot Head of the Technical Committee, said that “this is our common homeland, the land of our history and our destiny.”

“The Technical Committee stands before these monuments with awe and respect and offers them a sincere apology on behalf of all of us. They have suffered greatly from the selfishness, indifference and madness of people and in many cases, all that is left of them is ruins” he said.

Ali Tuncay, the Turkish Cypriot Head of the Technical Committee, who grew up in the neighbourhood, made a reference to his childhood memories from St. Anne.

“I have never forgotten St. Anne as a part of my childhood and youth memories and I submitted the list comprised of mosques and churches from Middle Ages, including St. Anne, to the agenda of the Committee in 2013” he said adding that conservation works were eventually carried out.

Elisabeth Spehar, the UN Secretary-General’s Special Representative in Cyprus was also present and spoke about the role that heritage sites can play, especially for new generations, in connecting the past to the present.

The event was also addressed by Arttu Makipaa from the European Union Support Office, who said that since 2012 the EU is financing the work on cultural heritage in Cyprus with no less than 14.5 mln euro.

Tiziana Zennaro, UNDP Cyprus Senior Programme Manager and Head of Office, said that together with the Technical Committee and with EU funding they have conserved so far 8 Orthodox churches, 8 mosques or minarets, 4 Maronite churches, one Armenian church, one Latin church and several secular monuments.

The church of St. Anne was probably built in the early 4th century and was part of a monastic complex. It was given to the Maronites in the 14th century. Conservator Kalypso Photiou from Mediterranean Conservators told CNA that eight frescoes can be seen inside the church. There are more frescoes beneath a layer of cement, which was used to consolidate the building. These will be restored during a second phase of conservation works, once funding is secured, she added.

Parts of frescoes are also visible inside Tanners’ mosque, a 15th or 16th century church that was converted into a small mosque. During Ottoman times it was used by tanners working nearby, hence its name.

By In Cyprus
Previous articleUS endorses trilateral cooperation between Cyprus, Greece and Israel
Next articleContinuous share structure changes at Interfund