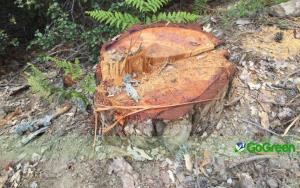 A restaurant owner illegally cut off three old black pine trees within the Natura 2000 Network Special Conservation and Protection Zone, east of the Troodos square, next to a cafe-restaurant.

During a visit from the Officer of the Platres Forest Station in the Troodos square area on June 25 2021, three dry black pine trees were discovered within an area which is sublet to a private restaurant owner.

According to information gathered by Philenews, it was ascertained that the drying of the trees was due to olive kernel placed next to the pine trees and used as a heating source by the owner.

Upon instructions from the Forestry Department, the owner moved the kernel from the area.

No punishment has been imposed on the owner yet, but the charge has been issued under the Forest Law and predicts either a €5,000 fine or up to 12 months imprisonment or a combination of both.