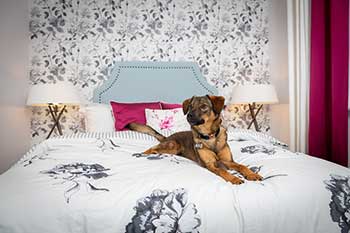 Wilf, a stray rescued from Cyprus by his Southampton ‘parents’ Charlotte and Ben, has won a marketing competition in Hampshire, UK, for local housing developments, the Daily Echo reports.

Linden Homes’ Boorley Park and Limewood Grange developments had launched a competition across Hampshire where they called on all cat and dog owners to submit photos of their pets to find the next star of their marketing campaign.

Wilf, as the winner, will soon star in a photo shoot to take place in Boorley Park in Botley, and his furry face will appear on all the developments’ marketing materials, including brochures.

His ‘mum’ Charlotte, speaking to the Daily Echo, praised the work of the volunteers at Cyprus charity PAWS Dog Shelter who “work tirelessly to feed, provide veterinary care and show love to the forgotten dogs that find themselves at their gates.”

Wilf had been in the foster care of a couple in Cyprus, and was then taken in by PAWS when space became available at the shelter.

“Wilf caught our eye by chance and we knew then that he would be coming to the UK to live with us.

“Once he had been given his vaccinations and he had passed his ‘fit to fly’ test, he travelled via plane to Gatwick Airport where we met him for the first time,” Charlotte told the newspaper.

In a press release announcing the news, Jo Dixon, marketing manager for Linden Homes South, said ““Wilf is a beautiful and well natured dog – he was a pleasure to welcome to our show home and has a wonderful temperament considering his life earlier this year was very different. He’ll certainly make our new advertising campaigns for Boorley Park and Limewood Grange stand out.”

You can find out more about the work of PAWS Dog Shelter in Cyprus on their Facebook page, and you can follow Wilf’s adventures on Instagram, where he has his own profile:

We’ve been waiting with bated breath to release this on our Insta, but wanted to wait until @lindenhomesuk had released it to the press, so we’re very proud to announce today that Wilf was crowned the winner of Linden Homes Boorley Park & Limewood Grange Star of The Show Home! ➳ The competition called on dog and cat owners across Hampshire to apply for their pet to become the (pet) face of promotional materials, adverts and leaflets for Linden Home’s developments. ➳ As the winner, Wilf was invited to star in a photo shoot in the show home at Boorley Park to show how pets are an integral part of what makes a house a home 🏡♥️ ➳ In the spirit of love for animals, Linden homes also kindly donated £250 to the Southampton Blue Cross, to help towards caring for the animals there, currently waiting to find their forever homes 💙 ➳ We’re so proud of this pupper – this time last year he was looking for a home to call his own, today he’s found his own and is now helping to advertise the beautiful homes available to purchase from Linden Homes! ➳ 📸 Photography by the very talented Huw Evans 🙂 ➳

By In Cyprus
Previous articleCash, jewellery stolen from Peyia home, no signs of break-in
Next articleBerlin Libya summit calls for all parties to refrain from oil hostilities