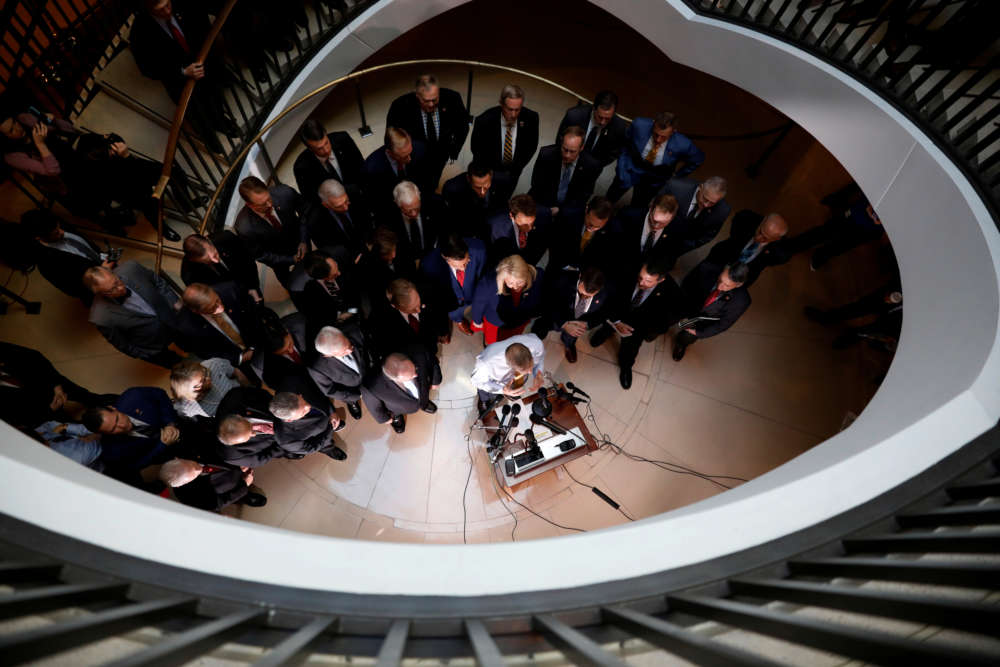 A U.S. House of Representatives impeachment inquiry devolved into chaos on Wednesday as Republican lawmakers, encouraged by President Donald Trump to get tougher in fighting Democratic efforts to impeach him over dealings with Ukraine, stormed into a high-security hearing room and delayed testimony by a witness.

The more than two dozen Republican lawmakers, who were not authorized to attend the hearing, entered before Laura Cooper, the U.S. defense official who oversees Ukraine and Russia matters, was due to testify behind closed doors before Republican and Democratic lawmakers.

The Republicans yelled complaints that the Democrats in charge of the inquiry were conducting it in private, lawmakers and aides said. Republicans who are members of the three congressional committees conducting the inquiry have taken part in the process throughout.

After a delay of about four hours, Cooper began her testimony.

It was a dramatic confrontation in the House of Representatives inquiry that threatens Republican Trump’s presidency even as he seeks re-election next year.

Democrats are investigating whether there are grounds to impeach Trump over his July 25 request in a phone call to Ukrainian President Volodymyr Zelenskiy to investigate a domestic political rival, former Vice President Joe Biden. Biden is a front-runner for the 2020 Democratic presidential nomination.

Zelenskiy agreed during the call. U.S. security aid that had been approved by the U.S. Congress but was being withheld from Ukraine was later provided.

The content of the phone call was revealed by a whistleblower complaint against Trump by a person in a U.S. intelligence agency.

The top Republicans on the three committees sent a letter to House Intelligence Committee Chairman Adam Schiff on Wednesday calling on him to have the whistleblower testify publicly. They said Schiff had decided that the committees would not hear the whistleblower’s testimony. A Schiff spokesman declined to comment.

People familiar with the matter had said negotiations for the whistleblower’s testimony were complicated. Trump had suggested the person committed treason, leading Democrats to worry that their testimony could put them at risk of exposure.

By having Republican lawmakers barge into the hearing room, Trump’s allies sought to put the focus on what they portray as unfair Democratic tactics rather than on the president’s conduct.

Late on Wednesday, House Republican Whip Steve Scalise, who led the confrontation, told reporters, “There are going to be other things done to push even harder to have a fair and open process.”

Although the Republicans complained of a lack of transparency in the inquiry, the U.S. Constitution gives the House wide latitude in how to conduct the impeachment process and set rules for the probe. It is being held in a secure room used to brief lawmakers about confidential or sensitive material.

“They’re freaked out. They’re trying to stop this investigation,” Democratic Representative Ted Lieu said of the Republicans. “They know more facts are going to be delivered which are absolutely damning to the president of the United States.”

Republicans brought cellphones into the facility even though electronic devices are forbidden and an Intelligence Committee official said some refused to remove them. The House parliamentarian ruled that the Republican lawmakers violated House rules, the official added.

Schiff told reporters that the witnesses testifying in the inquiry have defied the White House efforts to keep them silent and that “the president has urged his acolytes in Congress to use other means to try to prevent their testimony. But they won’t be successful.”

Trump on Monday told reporters that “Republicans have to get tougher and fight” the impeachment, saying the Democrats are “vicious and they stick together.”

Trump also criticized his Republican critics on Twitter, writing: “The Never Trumper Republicans, though on respirators with not many left, are in certain ways worse and more dangerous for our Country than the Do Nothing Democrats. Watch out for them, they are human scum!”

Before the hearing room was stormed, dozens of House Republicans appeared before reporters denouncing the impeachment process as a “joke,” a “railroad job,” a “charade” and “Soviet-style.” They complained that testimony was being taken privately rather than in public hearings and that the House did not hold a vote formally authorizing the investigation.

‘WE’RE NOT GOING TO BE DETERRED’

Cooper, the deputy assistant secretary of defense for Russia, Ukraine and Eurasia, began testifying on Wednesday afternoon after the standoff ended, an Intelligence Committee official said. Cooper was expected to face questions about Trump’s decision this year to withhold $391 million in security assistance to Ukraine.

Cooper had initially agreed to testify voluntarily but after pushback from the Pentagon was subpoenaed by the House Intelligence Committee early on Wednesday, according to an official working on the impeachment probe.

In an Oct. 22 letter to Cooper’s attorney that was seen by Reuters, the Pentagon suggested Cooper could not be “sanctioned for refusing to comply” with a subpoena and reminded her of White House guidance that personnel could not participate in the inquiry.

In testimony on Tuesday, William Taylor, the top U.S. diplomat in Ukraine, said Trump had made aid contingent on the Ukrainian president announcing he would investigate Biden, his son Hunter Biden’s tenure on the board of a Ukrainian energy company, and a debunked conspiracy theory that Ukraine meddled in the 2016 U.S. presidential election.

So far, few Republicans have appeared inclined toward Trump’s removal, though there have been some cracks in their support. Senator John Thune, the Senate’s No. 2 Republican, told reporters that the picture painted by Taylor’s testimony “based on the reporting that we’ve seen is not a good one.”

The inquiry could lead to the House passing formal charges known as articles of impeachment, prompting a trial in the Republican-controlled Senate on whether to remove Trump from office.

Democratic lawmakers hope to complete the impeachment inquiry by year’s end and are coalescing around two articles of impeachment: abuse of power and obstruction, lawmakers and aides told Reuters.

The next deposition is set for Saturday, when Philip Reeker, the acting U.S. assistant secretary of state for European and Eurasian affairs, is expected to appear, an official working on the impeachment inquiry said.

Former deputy national security adviser Charles Kupperman is expected to appear on Monday and National Security Council official Timothy Morrison is due to give testimony on Oct. 31, the official said.

Democratic Representative David Cicilline told reporters that holding the depositions in private protects the integrity of the inquiry.

“One of the reasons you do these in private is because you want to prevent witnesses from attempting to align their testimony to the testimony of another witness by watching it or reading a transcript. It’s how you protect the integrity of any investigation,” Cicilline said.

Republican Representative Mark Meadows told reporters after Cooper’s testimony that he wanted to hear from more witnesses with “first-hand knowledge” of the events.