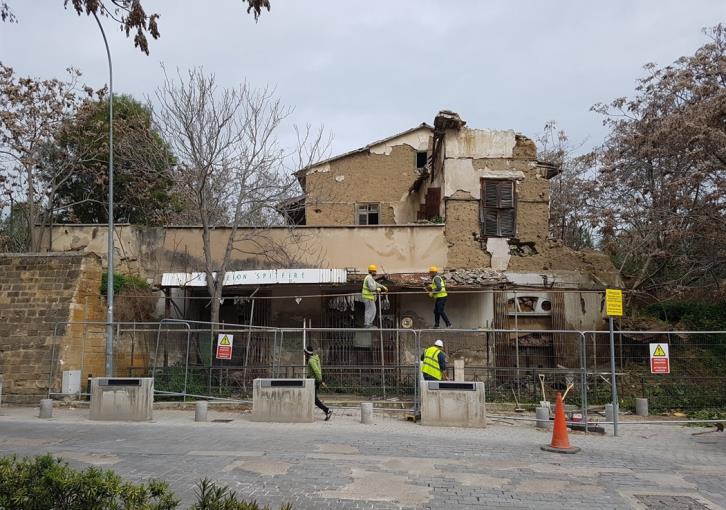 Nicosia has made representations to the UN peacekeeping force in Cyprus (UNFICYP) following the harassment of Nicosia municipality crews working to clean and shore up a dilapidated building, which housed the Spitfire coffeeshop at Paphos Gate in Nicosia’s old town, CNA has learned.

Diplomatic sources have told CNA that from the very first moment that the Turkish troops harassed the Nicosia Municipality crews representations were made to UNFICYP and that the Cyprus government is in constant contact with the peacekeeping force today as well on this issue.

Moreover, they noted that UNFICYP is making efforts for the issue to be resolved, however there is no result so far. The aim, they added, is for the Nicosia Municipality crews to be able to continue their work in the area, as scheduled, without any interference.

UNFICYP spokesperson Aleem Siddique told CNA on Friday that the force continues to actively patrol the sensitive area around Spitfire café and is closely monitoring developments on the ground. Moreover, he noted that UNFICYP is engaging with relevant stakeholders on both sides and at the highest level to arrive at a peaceful resolution and prevent tension.

He also noted that “the Mission reiterates the need for all concerned to work constructively with UNFICYP to that end” and that “at this juncture, UNFICYP calls on involved parties to suspend all ongoing activity in and around Spitfire cafe.”

In a statement on its Facebook page, the Nicosia Municipality said that “unfortunately, because of the continuous harassment from the Turkish occupation army, we are forced to withdraw the crews from the area and suspend work.”

“We are sorry because the UN, despite discussions we held in the past one-and-a-half years, have not managed to provide our contractor’s crews the necessary protection to continue the necessary work to prevent the collapse of the building,” it noted.

“We are also sorry because the good cooperation we have with the Turkish Cypriots, as part of the Nicosia Master Plan, did not prevent interventions and harassment,” the Municipality said.

The Spitfire building was an emblematic Nicosia spot that was left to deteriorate after the 1974 Turkish invasion of Cyprus, when the coffee shop fell within the UN-controlled buffer zone separating the island.