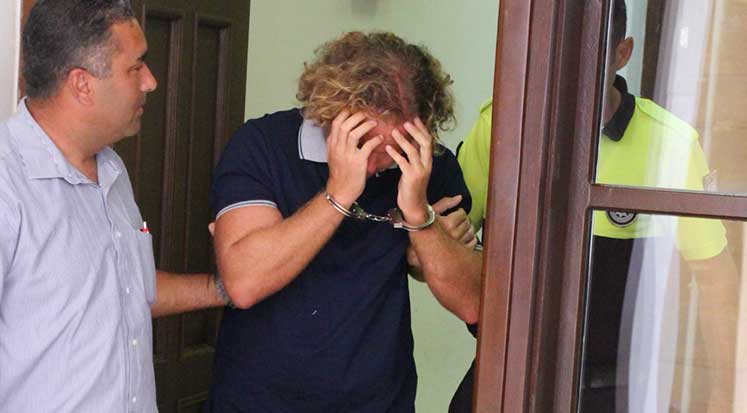 A Briton suspected of killing George Barker at a gym in Bexley, UK, in 2016  remains in custody in Turkish occupied north Cyprus pending his deportation, Turkish Cypriot newspaper Havardis reported on Friday.

Charles Riddington was arrested in Turkish occupied Trikomo after a tip off from Interpol earlier this week.  Havardis said his fingerprints matched those sent by Interpol.

He is being sought by the Metropolitan police for the murder of Barker, 24 from South Darenth at the Double K Gym in Bexley on November. 14, 2016. His partner had given birth to their baby daughter just five days before his death and they were due to register her name the week he was killed.

Riddington appeared before a ‘court’ in the Turkish held north on Thursday which ruled that he should remain in custody.

The ‘court’ heard that he had entered the occupied north on December 27, 2017  with a fake Namibian passport, which he used for several trips during 2018.

Havardis said that a significant amount of money was found in his home which the suspect said he had brought from abroad.

The Metropolitan Police, which in January had offered a £10,000 reward for any information that might lead to Riddington’s arrest, has confirmed that the force was aware of his arrest and was “waiting for the outcome” of the investigation.

Meanwhile British MP Gareth Johnson has urged Turkish Cypriot authorities to cooperate so that Riddington can be sent to the UK.

The MP for Dartford, including South Darenth said the arrest was an important development but it was essential he be sent to the UK to face trial.

He said that it was hugely disappointing that two years ago authorities in the Turkish held north had allowed the main suspects for the murder of George Low to leave.

” I know the [Foreign Office] will be doing all it can to encourage them to do the right thing this time,” he said.

George Low was a 22-year-old man from Dartford who was stabbed to death in Ayia Napa in August 2016.

After his death, an arrest warrant was issued for Sali Ahmet, who fled to the Turkish-controlled north after the attack but the authorities there allowed him to leave without being charged.