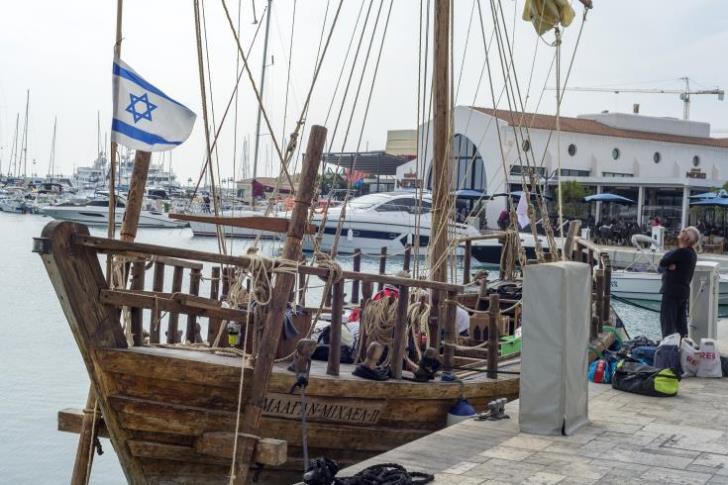 After a 75-hour journey the Israeli ship “Ma’agan Michael 2,” led by a six-man crew has arrived at Limassol Marina.

Ma’agan Michael is a replica of an ancient (fifth century B.C.) Israeli ship and is considered to be a “twin” ship of  the Cypriot fourth century B.C. “Kyrenia-Eleftheria.”

The ship was docked next to Kyrenia-Eleftheria at Limassol Marina and in the next days the two vessels will sail together.

Former Kyrenia mayor Glafcos Cariolou said that most artefacts recovered from the Ma’agan Michael wreck are attributed to Cyprus and that the ballast of the ship was made from items that originated in Kouris river, Cyprus.

Cariolou added that an important factor in Israel’s decision to build a replica of the Ma’agan Michael was the information provided to the University of Haifa by the Kyrenia-Eleftheria crew, the cultural centre Kyrenia-Chrysokava and the University of Cyprus.

“University of Haifa staff studied our data, read our researches and saw our pictures. This is another indication of the new era of cooperation between Cyprus and Israel, not only in energy and politics but also in culture,” Cariolou said.

“The feeling is incredible, now that the journey is done,” said the ship’s captain, Yochai Palzur.

The original Ma’agan Michael was discovered off the coast of Kibbutz Ma’agan Michael, Israel, in 1985. The ship was excavated and its timber immersed in preservation tanks at the University of Haifa.

According to the Times of Israel, archaeologists from the University of Haifa dug out the remains of the ancient vessel over the course of three seasons in 1988 and 1989. The ship, a standard sort of cargo vessel at the time, was around 37-feet long and 13-feet wide and was believed to hail from Greece. The well-preserved bottom of the ancient craft was dug out from the sediment that preserved its wooden beams. Ballast from the ship’s hold were determined to be from the Greek island of Euboaea, while other stones were from southern Cyprus. The hull was crafted of Aleppo pine and some other parts of oak.

In view of its construction and contents it was later deemed most likely to be Cypriot, perhaps related to a Cypriot centre at nearby Dor.

Also, about 70 pottery vessels from Cyprus and eastern Greece that were used by the crew were found in the wreck.

The discovery of the ship provided researchers with insights into the development of ancient shipbuilding. The ship displays many similarities to the Kyrenia ship, but also important differences in size, construction methods and material, and ballast.

Beside offering clues to the evolution of anchors, the Ma’agan Michael anchor is also the first complete one-armed ancient wooden anchor ever discovered.

Since 1999, the preserved remains of the ancient ship have been on display at Haifa’s Hecht Museum.

This was the first journey of the Ma’agan Michael 2 which had been docked at Haifa port since 2017.

Kyrenia-Eleftheria is planned to sail to Israel in April 2019.

By In Cyprus
Previous articleKites, dancing penguins and magic: ‘Mary Poppins Returns’
Next articleGreens join voice to save hostel for blind