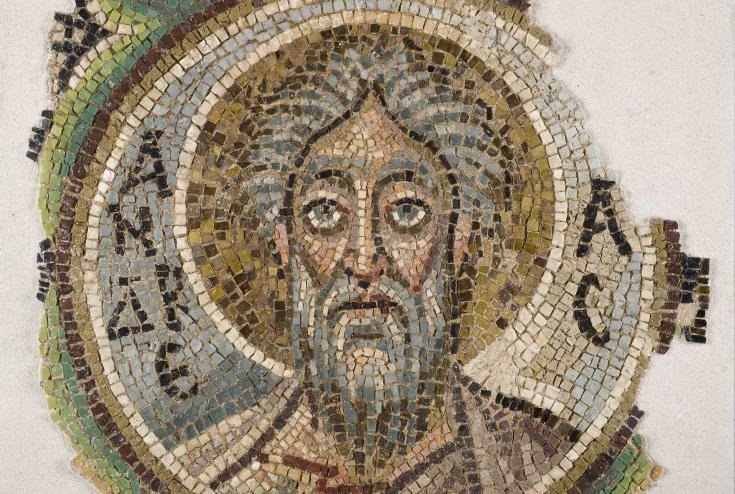 Cypriot art historian Maria Paphiti has told the Cyprus News Agency (CNA) that 2018 was a significant year for the world cultural heritage, as the last complete fragments from the nearly 1,500-year-old apse mosaic of the church of Panagia Kanakaria in the occupied village of Lythrangomi, in Famagusta district, missing since their looting in 1976, were repatriated to Cyprus.

“The repatriation of these 6th century mosaics is important not only for Cyprus but for the world cultural heritage too”, stressed Paphiti, who identified in 2014 the fragment of Apostle Andrew from the Church’s 6th century mosaic decoration.

In April, Paphiti repatriated the mosaic of Apostle Andrew, “the most emblematic of all and perhaps the most important treasure that had been missing from Cyprus – a symbol of our looted cultural heritage in recent years,” as she said.

In November, Dutch art investigator, Arthur Brand, returned to the Embassy of Cyprus in The Hague the mosaic of Apostle Mark, which was subsequently repatriated to the island. Also, on 9 September, the first liturgy was held in the church of Panagia Kanakaria since 1976, when the last Greek Cypriots that remained there after the 1974 Turkish invasion of the island, were forced by the Turks to leave their village.

“I believe that the three above events allow us to compare 2018 with 1989, a landmark year for Kanakaria, during which the Republic of Cyprus and the Church of Cyprus won a trial against art dealer Peg Goldberg, who had bought four fragments of the mosaic from the Turkish smuggler Aydin Dikmen, with the intention of selling them for 20 million dollars to the Paul J. Getty Museum,” Paphiti told CNA.

She pointed out that the Kanakaria trial, held in Indianapolis, USA, was among the first high-profile cases of claiming cultural heritage worldwide. It set a precedent and it is referred to in similar issues to the present day. The four fragments won in 1989 depict the upper part of the body of Christ, an archangel and the Apostles James and Matthew.

Asked how she got involved with the case of the Kanakaria mosaics, Paphiti explained that as an art consultant with specialisation in Byzantine and Russian art, she works with collectors in the respective fields from different countries.

“A client of mine purchased a collection of icons and religious works of art, one of which was the mosaic of Apostle Andrew. I identified it when I was asked to study his new acquisitions. I wrote a report and then I explained to the client that the mosaic worth more than six million euros had been looted from the occupied Cyprus. He was unpleasantly surprised and initially his reaction was negative because he himself had acquired the collection by lawful proceedings”, she stated.

“Then, after having assessed the situation, the client decided to hand over the mosaic for a token sum that would cover the costs of storage, insurance and maintenance while the artwork was in his possession. This settlement was indeed fair because under Article 6 of the 1995 UNIDROIT Convention the possessor is entitled to demanding a reasonable compensation”, Paphiti said.

She added that the alternative option would be for Cyprus and its Church to proceed to litigation that would have probably ended victoriously, but would have been extremely time consuming and would have cost more than the 50,000 euro compensation given to the possessor. Two donors, Dr. Andreas Pittas and Roys Poyiadjis paid the amount, while the legal services were provided free of charge by lawyer Michael Kοrelis. As a result, the cost to Cyprus and the Church was nil.

Paphiti emphasized that “everyone, and especially the professionals in the field of art, must operate in an ethical and transparent way, but should also keep a watchful eye to identify artworks that are illegally marketed, whether they come from our country or elsewhere.”

As far as the missing pieces of the mosaic are concerned, she said that there are not much left. Yet, they are all important, because without each and every fragment, the composition that existed in the sanctuary apse cannot be recreated as it had appeared prior to 1976, when they were detached from the wall, she noted.

Still missing are the mosaics of Apostle Philip, that was in a fragmented state before the pillaging, an unidentified saint, the lower part of Christ`s body and a non-figural decorative fragment, she added.

Asked about the importance of the church and its decoration, Paphiti explained that the Kanakaria mosaics, dating back to the beginning of the 6th century, are of great importance for the world art history and cultural heritage because they are among a handful of Christian artefacts that survived iconoclasm (726-843 AD), thus providing vital information for the portrayal of divine persons during the early Byzantine era.

The mosaic composition that adorned the sanctuary apse of Kanakaria church depicted the enthroned Virgin holding Christ, not as an infant, but as a young boy, framed by a frieze showing portraits of the Apostles in medallions.

She added that the cultural significance of the mosaic, as well as of the Church itself were known for a long time. That is precisely why Harvard University selected it as one of the earliest monuments and undertook its restoration, Paphiti said.

She pointed out that a further proof of the church’s recognition is the fact that the British colonial administration of Cyprus issued in 1955 a stamp that represented the church of Kanakaria. She added that the Cypriot Post released in 1967 a stamp dedicated to the mosaic of Apostle Andrew, who stood out from the rest of the Apostles, due to his unique features, namely, his long beard, dishevelled hair and blue eyes. Moreover, in 1991, following the victory of the Indianapolis trial, the Cyprus Post issued a new series depicting the four fragments that had just been repatriated, as well as the mosaic of St. Andrew on the limited-edition collector`s card.

Paphiti visited the church in Lythrangomi on 9 September, when a liturgy took place there for the first time after 42 years. “Since my childhood, I listened with great interest discussions about the pillaging of our cultural heritage, especially the case of Kanakaria and the occasional repatriation of its fragments”, she told CNA.

“As an art historian I became even more aware of the church`s great importance. Also, due to my involvement in the repatriation of the Apostle Andrew fragment, I developed an emotional and personal relationship with the monument,” she added.

“My visit to Kanakaria on 9 September was a pilgrimage, a return to a place that seemed familiar because of my involvement in the matter, yet one, which in fact, had been unknown to me”, she said.

“I felt relieved, a sense I usually have on Easter night. However, that was mixed with sadness and anger about the destruction, the current downfall of the church and for what is permanently lost, since the church will never again return to its original state”, she noted.

By In Cyprus
Previous articleTeenage boy causes accident with his father’s car
Next articleUPDATE – U.S. government partially shut down in fight over Trump’s border wall