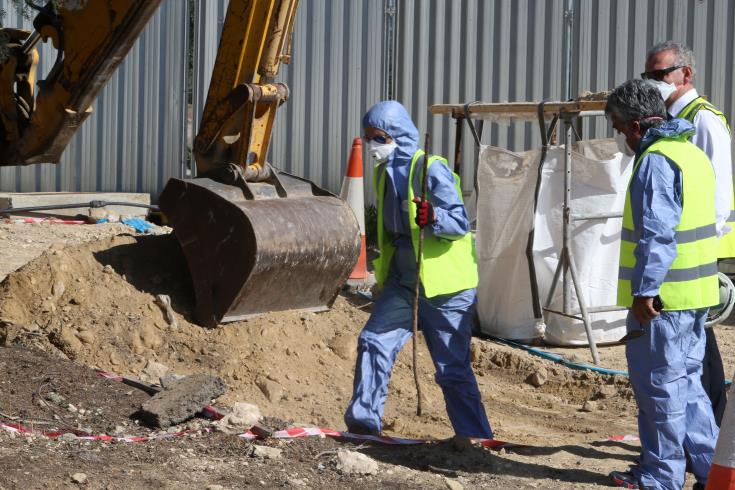 The remains of a Turkish Cypriot, who was among those killed during the bombing of Athalassa Psychiatric Hospital by Turkish warplanes in 1974, were handed over to his family on Tuesday, at a ceremony that took place at the anthropological laboratory of the Republic of Cyprus. Among those killed were two other Turkish Cypriots, whose remains have not yet been identified.

Osman Mustafa, from Avdimou village, who was 18 years old in 1974, is one of the seven individuals killed during the bombing whose remains have been identified so far.

The remains of other two of these seven individuals were buried last week. The identification of the remains of those killed at Athalassa Hospital is being carried out by the Institute of Neurology and Genetics in the framework of the relevant programme of the Republic of Cyprus.

Presidential Commissioner Photis Photiou told CNA that Osman Mustafa’s remains were handed over to his family, which lives in Agios Epiktitos, and were transferred with the help of the UN peace-keeping force in Cyprus to the Turkish occupied areas of the island in order to be buried.

Photiou stressed that “we have the moral obligation to hand over the remains of those killed during the bombing of the Hospital with napalm bombs, either Greek Cypriots or Turkish Cypriots, to their families.”

He went on to say that Osman Mustafa`s remains were transferred to the occupied areas “to be buried according to their traditions.”

On July 20, 1974 when Turkey invaded Cyprus the Turkish warplanes bombed Athalassa Hospital. Thirty-three persons were said to have been killed: 31 inmates, one nurse and one soldier. The bodies of the nurse and the soldier were given to their families and were buried.

Photiou told CNA that efforts to identify the remains of the other individuals killed at Athalassa Hospital continue.

He noted that the remains of 17-20 individuals have been discovered so far during the excavations, adding that the work of the scientific team is difficult as they need to track down the relatives of those killed.

Furthermore, Photiou said that an excavation will soon begin at Constantinou and Eleni cemetery in Nicosia, where according to information five to six of those killed at Athalassa Hospital were buried.