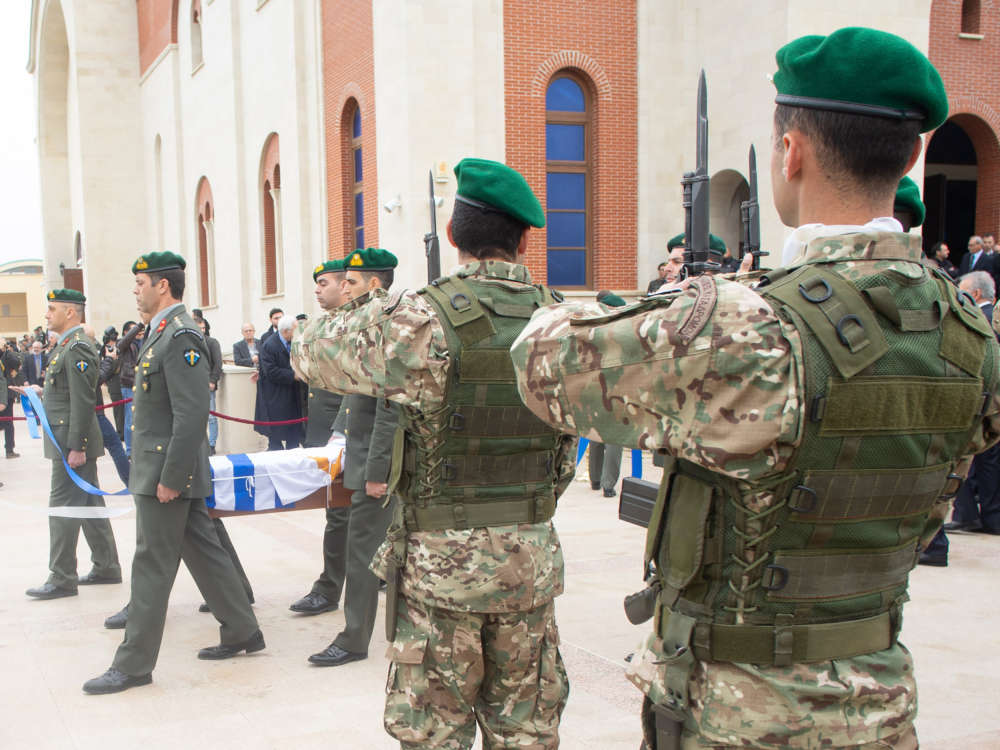 The remains of Georgios Katsanis, a Greek army officer who was killed in Cyprus during the 1974 Turkish invasion, were handed over to his relatives today following a religious ceremony in Nicosia attended by the country’s political and military leadership.

The remains of Katsanis were located in 2017 by the Committee of Missing Persons (CMP), along with seven other officers, in a mass grave in the area close to St. Hilarion castle and Bellapais, in Turkish-occupied north Cyprus.

Photiou said that the remains of Katsanis were handed over to his family, 46 years after he was killed, with the whole nation kneeling before his sacrifice. The Presidential Commissioner assured those present about the determination of the President of Cyprus, Nicos Anastasiades, to work for a just and viable Cyprus settlement, that will terminate the presence of Turkish occupation troops, and which will put an end to guarantees and intervention rights, fully aligned with international law, EU and UN principles.

He also said that the effort to determine the fate of all missing persons, including that of 47 Greek citizens, will continue.

On his part, Stefanis paid tribute to Katsanis for his sacrifice for the nation and assured those present that Greece will continue to support Cyprus, while conveying the message that “the security of Cyprus is also our security.”

The Greek Deputy Defence Minister also noted that the primary concern of Athens is a mutually acceptable, just, comprehensive and permanent settlement in Cyprus, on the basis of the EU acquis and international law.

Stefanis thanked finally the government of Cyprus for the efforts to locate and identify the remains of all Cypriot and Greek fighters who perished during 1974.

Defence Minister Savvas Angelides decorated Katsanis with the medal for exceptional service of the Republic of Cyprus. Katsanis’ daughter, Evanthia, received the medal on behalf of her father.

The coffin with the remains of Katsanis, wrapperd in the flags of Cyprus and Greece, was subsequently handed over to the Hellenic Force in Cyprus, to be transported to Greece with a C-130 military aircraft. His burial service will be held in his hometown, Sidirokastro, in northern Greece, this Saturday.