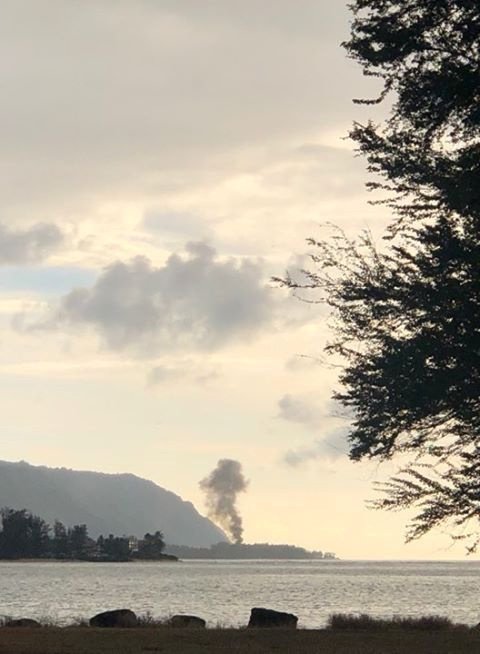 Teams combing the wreckage of a Hawaii sightseeing helicopter that crashed on Kauai island found no sign of survivors on Saturday and recovered six sets of human remains before suspending the search due to bad weather, police and fire officials said.

The grim announcement came in a news conference almost 24 hours after the aircraft, first reported missing on Thursday evening, went down in a remote area of rugged terrain near the end of a tour flight over the island’s famed Na Pali Coast.

The crash was at least the ninth, and by far the deadliest, involving sightseeing helicopters in Hawaii over the past five years, according to National Transportation Safety Board (NTSB) records.

The identities of the dead were being kept confidential until next of kin could be notified, authorities said.

“We are heartbroken by this tragedy and we continue to ask the public to consider the sensitive nature of this devastating situation,” Mayor Derek Kawakami said in a statement.

“Our thoughts and prayers are with the families and loved ones of all victims during this extremely difficult time.”

The Kauai fire department called off its search-and-recovery efforts late Friday afternoon due to fog and poor visibility but planned to resume the operation at daybreak on Saturday, Kanoho said.

Although the remains of just six of the seven people who were aboard the ill-fated aircraft have been recovered, Kanoho added: “There are no indications of survivors.”

Kanoho previously said the passengers on board the helicopter had been in two groups – a party of two from one family and a party of four from another.

Kanoho declined to describe details of the wreckage out of respect for the victims’ loved ones.

While the cause of the crash has yet to be determined, Kanoho said the area where the helicopter went down had experienced “some very bad weather” beforehand, adding that the chopper had crashed within its prescribed flight route.

The NTSB, which said it was sending a three-member team to investigate the crash, reported in May that there had been eight accidents involving Hawaii tour helicopters over the past five years, with four deaths and 18 injuries.

The agency made that report after a tour helicopter went down in a residential neighborhood on the island of Oahu in April, killing three people.

The latest crash was in Koke’e State Park in an area called Nu’alolo, a steep-sided valley north of Waimea Canyon State Park, according to a statement posted by the Kauai police department on Facebook.

Waimea Canyon is a tourist destination known as the “Grand Canyon of the Pacific,” and police said the helicopter was last heard from at about 4:40 p.m. on Thursday, when the pilot radioed that the aircraft was just departing that area.

A search was launched a short time later, after Safari alerted authorities that the helicopter was 30 minutes overdue on its flight back to the airfield in Lihue on the island’s southeast end, officials said.

A U.S. Coast Guard cutter vessel and helicopter search crew were immediately dispatched. The search was expanded at daybreak on Friday to include air, sea and ground teams from the Coast Guard, U.S. Navy, police, fire department and other agencies.

The missing aircraft was equipped with an electronic locator beacon, but no signals were received after it disappeared, the Coast Guard said.

According to its website, Safari offers aerial sightseeing excursions to Kauai’s major attractions over the Na Pali Coast and Waimea Canyon. The Na Pali Coast, known for jagged green cliffs laced with towering waterfalls, is one of the most visited attractions on Kauai, the fourth-largest island in the Hawaiian chain.