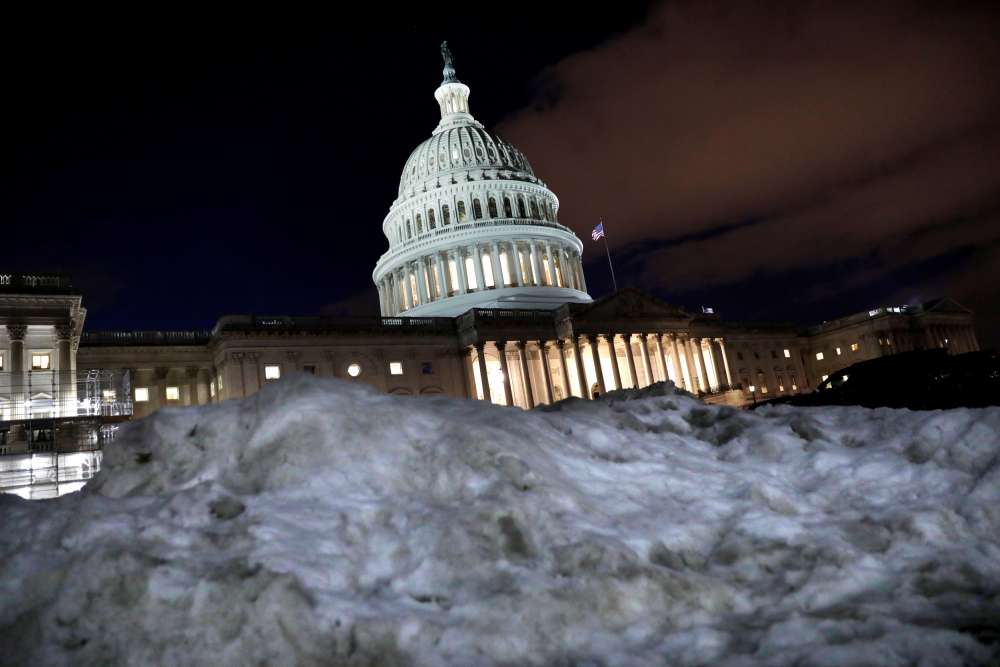 Two-thirds of the continental United States will be a frozen ice box Tuesday, as the so-called polar vortex of frigid arctic air spins across the U.S. Midwest, clips the Great Lakes, the Ohio Valley and pushes on into New England.

And the sub-zero cold and bitter winds will stick around for a couple of days, possibly bringing dozens of record lows with a life-threatening freeze before dissipating by the weekend, the National Weather Service reported (NWS).

The polar vortex is a mass of freezing air that normally spins around the North Pole, but has slipped southward and swirled into the United States, forecasters said.

The hardest-hit area will be the Midwest, where wind chill could bring temperatures as low as -50 F (-46C) in the Chicago area by Tuesday evening, the NWS reported. One-to-two feet of snow was forecast in Wisconsin, and six inches in Illinois.

Even Alabama and Mississippi could see snow, the service added.

“This arctic air dumps out of Canada and will affect us for days,” said Richard Bann, a forecaster with the NWS’s Weather Prediction Center in College Park Maryland.

“We’ll even get some snow this afternoon in the (Washington) D.C. area,” he said. “And because it’s so cold, there won’t be much of a warm-up Wednesday. You’ll have to wait for the weekend, before you see any higher temperatures.”

Blizzard conditions were predicted across parts of the western Ohio Valley and snow was expected through Wednesday from the Great Lakes region into New England.

States of emergency have been declared from Wisconsin and Michigan, down to Alabama and Mississippi.

In Illinois, Governor J.B. Pritzker said wind chill could drive temperatures to -55 degrees Fahrenheit in northern parts of the state on Tuesday evening, a level that can cause frostbite in a matter of minutes.

“This is a potentially historic winter storm that will bring extreme cold to our state and all Illinoisans must prepare,” Pritzker said in a written statement released by his office.

Parts of north and central Georgia are expecting about 2 inches of snow or more in the coming days, along with freezing rain and ice-slicked highways. Georgia Gov. Brian Kemp shut down government offices in 35 counties Tuesday, and schools across swaths of the state are also closed.

Air traffic in the region is affected, with more than 1,200 flights canceled and as many delayed, the flight tracking site FlightAware.com reported early Tuesday.

Atlanta-based Delta Air Lines Inc said it would waive flight change fees for passengers affected by the winter weather in Chicago, Detroit and areas of the Upper Midwest.

By In Cyprus
Previous articleWhen it comes to bats… why is Cyprus unique? (pictures+video)
Next articleShooting Sport in Larnaca