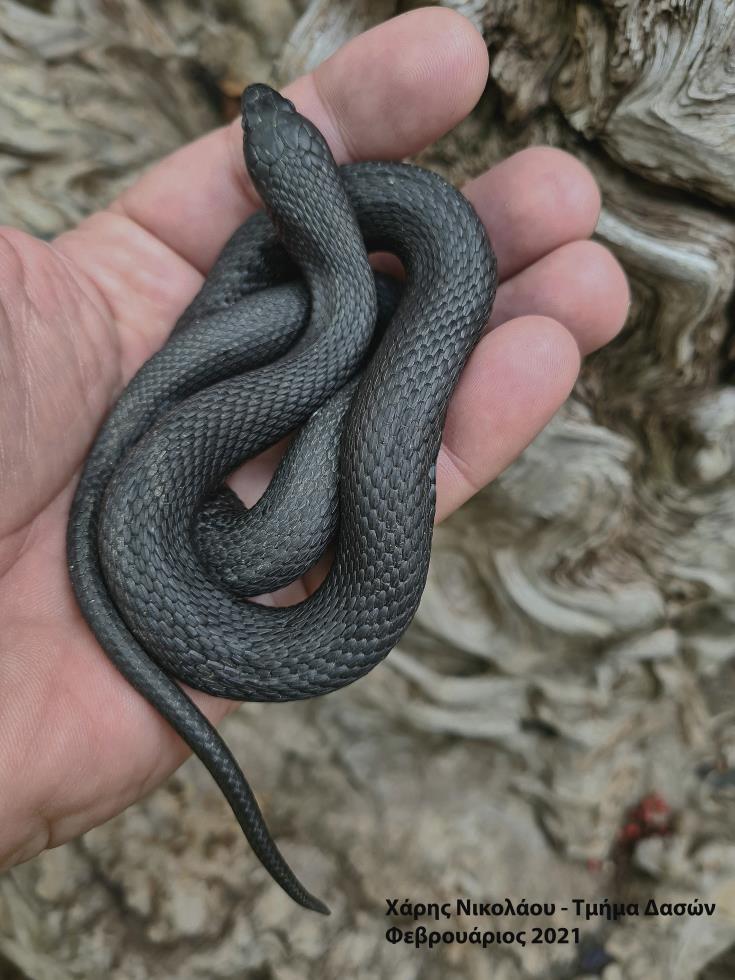 The Forestry Department of Cyprus announced on Tuesday that it located the rare Cyprus grass snake at two more locations in the Machairas national forest park. The Cyprus grass snake (Natrix natrix cypriaca) is found only in Cyprus and until now it was known to live only around the Paralimni lake and the Maroullenas river.

CNA contacted Haris Nicolaou from the Forestry Department, who described the finding as very significant.

Noting that a species with a very limited geographical distribution of its habitat is much easier to become extinct, he said that “now, with the discovery of new sites, we can hope that the population is larger than previously thought and we will be able to take protection measures to preserve it in the future.”

Natrix natrix cypriaca, which is protected by national and EU laws, is a rare species, endemic, and it exists only in Cyprus and nowhere else in the world, he added.

Asked how the Forestry Department found the new sites of the snake, he said that it was thanks to people who were giving information to the authorities about snakes seen in the area. Replying to questions, he said that indeed, due to the pandemic and the fact that people are closer to nature now, they could detect the snakes and inform the competent authorities, who went on site and concluded that the snakes are of this particular species.

As regards the next steps , he said that DNA samples have already been collected for identification in order to compare this particular snake with the population in the other two areas (Paralimni, Maroullenas).

He added that they will then search in all rivers in the area of Machairas to determine if there are others of the same species and in what condition their population is.

He noted that the area where they were located is already protected, which is very positive.

As regards the snake`s characteristics, he said that it is harmless and rather small. It feeds on frogs and sometimes on fish. As it is called water snake (nerofido) it is found near water areas.

“It is completely harmless, the only defense it has is that it secretes an unpleasant smell from a liquid from its glands just to prevent you from approaching or catching it. This is its defense. Nor does it try to bite when you catch it, as other snakes do. It has neither poison nor is it aggressive” he told CNA.

Nicolaou added that the maximum length of this snake is 1.25 cm, but most of them are between 60-70 cm.

Concluding, he pointed out that in Cyprus there is only one snake that is dangerous to humans, the viper, so called fina, which is larger and has a thick body with a triangular head.

By gavriella
Previous articleScenarios about relaxations of COVID measures
Next articlePresident participates in teleconference with EC President, EU heads of state