Rain, snow, strong winds and problems on the roads 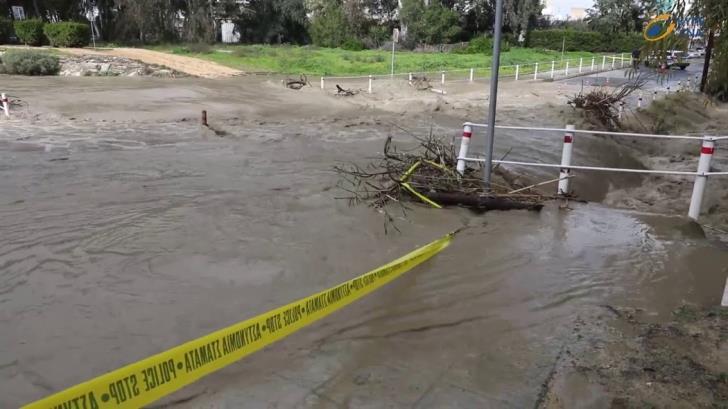 There will be more rain, snow and thunderstorms today as a winter storm continues to batter Cyprus, with police appealing to drivers to be particularly careful.

A number of roads are closed because of flooding or mudslides and several mountain roads open only to four wheel drive or cars equipped with snow chains.

Two yellow alerts remain in force — the first warning of strong winds is in effect until 1 pm on Tuesday and the second warning of heavy rainfall and thunderstorms until noon on Tuesday.

The fire services responded to 35 calls, most of them relating to the strong winds, in the past 24 hours. Fire services spokesman Andreas Kettis said fire fighters have removed uprooted trees and fallen signs and also responded to flooding problems. A driver who became trapped when trying to cross a large stream near Miliou was rescued yesterday while another rescue operation  was carried out in the Kalavassos dam area on Tuesday morning, he added.

In its early morning weather forecast, the Met Office said a low pressure system centered close to Rhodes is moving slowly east and will affect the area until Wednesday when the it will gradually recede.

Tuesday will be mainly cloudy with rain in most areas and isolated thunderstorms and snow at intervals in the Troodos Mountains. Winds will be strong and the seas rough. Temperatures will rise to around 14 C inland, around 17 C on the coast and around 2 C in the mountains. Locally there will be frost in the mountains, at least until midday.

Wednesday will be partly cloudy and at intervals cloudy with local rain and isolated thunderstorms as well as snow in the mountains.

Temperatures will remain at the same levels on Wednesday and Thursday at close to the seasonal average, edging down on Friday to below average for the time of year.

The depth of snow on Troodos Square at the time of issue of the weather bulletin was 64 cm.

In a heavy rainfall warning in force until 12 noon the Met Office said that rain and isolated thunderstorms are expected. Locally, mainly over the western and northern and mountainous areas the total rain accumulation is to likely to exceed 50 millimetres in a six hour period and in a thunderstorm the precipitation rate may exceed 35 millimetres per hour

The Met Office has also warned to near gale to gale southerly to southwesterly winds with mean speed of 7 to 8 Beaufort, mainly in the west and south. The warning is in effect until 1 pm.

There are a number of problems on the roads because of the weather and police are urging all drivers to be particularly careful.

• there are rock and mudslides on the Xyliatou-Lagoudera road, and one lane is closed

• a tree has fallen on Archbishop Kyprianos road in Klirou.

The following roads are closed

There are rock and mudslides on the Moniatis-Platres road.

Police said the situation on the roads i changing and urged drivers to stay up to date through its website and app.

It also noted that because of the heavy rain, strong winds and fogs in various parts of Cyprus, drivers should drive slowly, keep a safe distance from other vehicles and switch on their lights.

By In Cyprus
Previous articleDemis Hassabis: AI could spur humanity to realise its full potential
Next articleHa Potami: Burglars empty two safes, throw them in pool