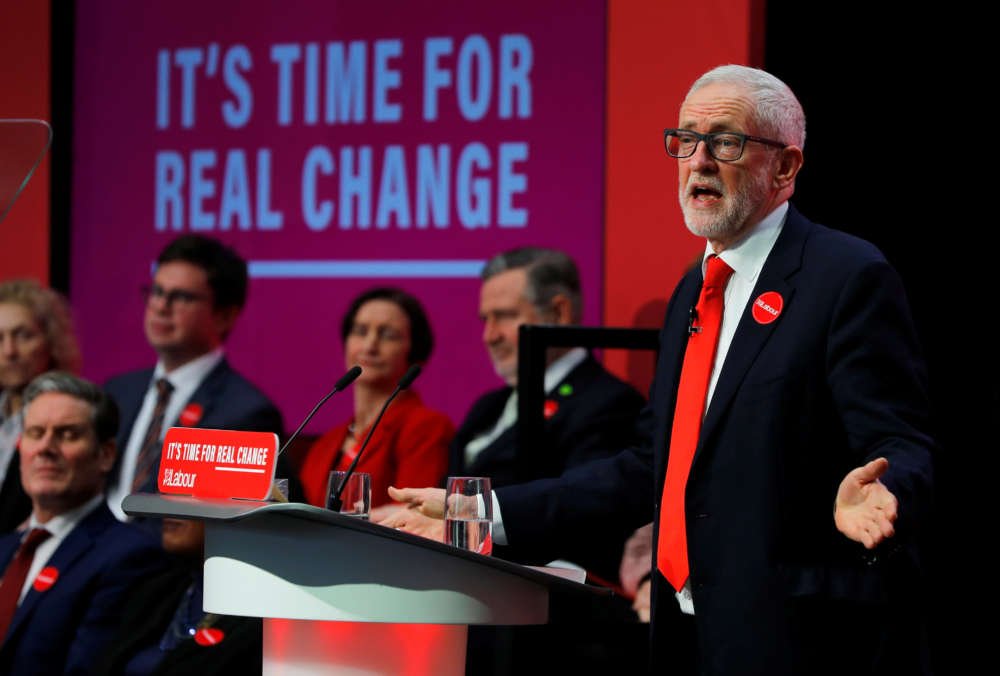 Voters faces a stark choice at the Dec. 12 election: Corbyn’s plan for a socialist Britain, including widespread nationalisation and free public services, or Prime Minister Boris Johnson’s drive to deliver Brexit within months and build a “dynamic market economy”.

Speaking in the central English city of Birmingham, Corbyn launched his “green industrial revolution” plans saying only Labour could challenge the status quo, fighting for ordinary people against “bankers, billionaires and the establishment”.

“Labour’s manifesto is a manifesto for hope, that is what this document is – a manifesto that will bring real change,” Corbyn said. “A manifesto full of popular policies that the political establishment has blocked for a generation.”

Lagging in the polls, Corbyn hopes his message of change will drown out criticism of his Brexit stance, which even some in his party say lacks the clarity of Johnson’s vow to “get Brexit done”.

He will also hope to avoid comparisons with Labour’s most infamous attempt to sell Britons a socialist future – a 1983 manifesto described later by a then Labour lawmaker as “the longest suicide note in history”, which led to heavy defeat.

Both parties have promised to end economic austerity and spend more money on public services ahead of the election, which will determine how, when and even whether Britain’s departure from the European Union happens.

Trying to combat criticism from Johnson’s Conservative Party over Labour’s spending plans, Corbyn sought to say how Labour planned to pay for its platform, which also includes scrapping university fees and reducing the working week.

Most polls put the Conservative Party in front, but few are able or willing to predict a victor in the election.

Labour could be in a position to form a minority government if Johnson’s Conservatives fall short of an outright majority in parliament and rivals are prepared to support Corbyn as prime minister.

But to implement its manifesto in full the party would likely need an even bigger turnaround in the election race to claim a majority of its own. One polling expert described the chances of this as “close to zero” based on current evidence.

Held after three years of negotiations to leave the EU, the December election for the first time will show how far Brexit has torn traditional political allegiances apart and will test an electorate increasingly tired of voting.

Labour has put at the forefront of its campaign its attack on “vested interests”, taking aim at Johnson, who was educated at England’s elite Eton public school, has considerable personal wealth and whose party has wealthy backers.

Amongst the proposals, Labour said it would bring in a windfall tax on oil companies, de-list companies that do not contribute to tackling climate change and increase public sector pay by 5%.

“They know we will go after the tax dodgers, the bad bosses and the big polluters so that everybody in our country gets a fair chance in life,” Corbyn said.

His manifesto promised to reverse privatisations begun by former Conservative Prime Minister Margaret Thatcher in the 1980s, by nationalising rail, mail, water, and BT’s broadband network to provide free internet for all.

Those pledges have been mocked by the Conservatives, with Johnson calling plans to nationalise broadband as a “crazed Communist scheme”.

“If the bankers, billionaires and the establishment thought we represented politics as usual, that we could be bought off, that nothing was really going to change – they wouldn’t attack us so ferociously,” he said. “But they know we mean what we say.”