Pyroi refugees say they will continue efforts to return home 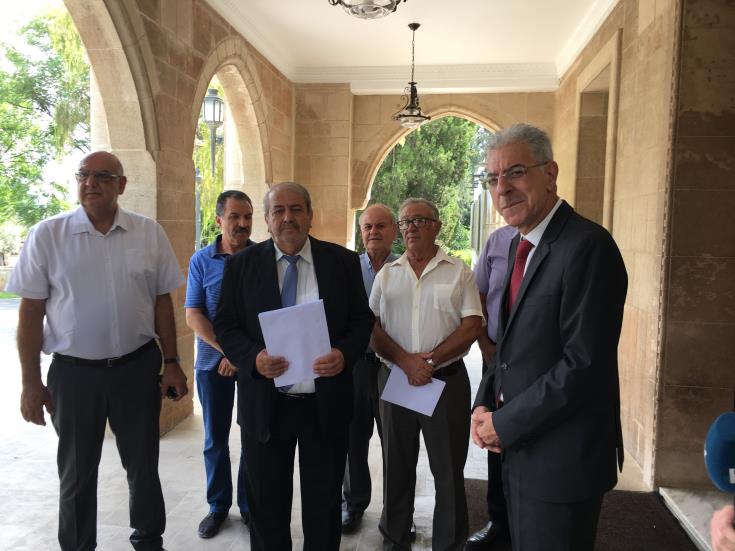 Refugees from the village of Pyroi handed over on Monday a resolution to the government, protesting the 45 years since their village was occupied by Turkish troops on August 18, 1974, while stating their determination to continue their efforts until they are allowed to return home.

Community Council President Constantinos Adamou, the President of the Refugee Association “To Pyroi” Panayiotis Savvides and a delegation from the occupied village met with Government Spokesman Prodromos Prodromou, at the Presidential Palace, asking him to forward the resolution to the President of Cyprus. Among others, they ask for the removal of all troops from their village, in order to reopen the old Nicosia-Larnaca road, which they say, will help ease traffic problems in the capital of Cyprus.

Adamou also included a letter to the President, detailing the obstacles that need to be tackled before reopening this road.

The Spokesman noted that President Anastasiades is making continuous efforts and lately it seems that there is a possibility that negotiations may resume. He also referred to the need for substantial negotiations, in line with the remarks of the UN Secretary-General, while making use “of all the previous stock of negotiations, the convergences, the parameters set by the Secretary-General” in order to reach a deal.

The solution should allow Cyprus – an independent European country – operate without the presence of occupation troops, foreign guarantees, for the benefit of all Cypriots and all legal residents, allowing thus people to return to their hometowns and villages, he added.

Prodromou also told the Pyroi delegation that their request to open a checkpoint at their village is one of the measures that are being discussed.

Adamou said on his part that they are protesting for the 45 years of occupation and thanked President Anastasiades for bringing up the issue of reopening the Nicosia-Larnaca road.

He also said that they are ready to assist the Technical Committees by providing information for their village. According to Adamou, close to the road that they want to reopen is the church of St. Antypas, perhaps the oldest Byzantine church in Cyprus, while near the road are mass graves believed to contain the remains of missing persons.

According to the resolution, Pyroi refugees call for a viable and functioning solution to the Cyprus problem, in the framework of a bizonal bicommunal federation, which will put an end to the country’s occupation by Turkey.

They also note that the status quo is unacceptable and state their determination to continue their efforts until they are allowed to return to their beloved community.