In the middle of the Nicosia — Limassol road, between Kornos and Psevdas, stretches a mild, shallow valley that is crossed by a small tributary of the river Tremithos and under the North foothills of Stavrovouni lies the village Pyrga of the Larnaca District.

Built at an altitude of 270 meters, the village is literally “drowned” in the green of pines and wild vegetation.

A panoramic view of the village
The village has a distance of about 23 kilometres from Larnaca and thirty from Nicosia.

Pyrga are protected and surrounded by the Appidaki, Syinova, Vasioti, Evgali, Stavris, Viklia, and Pipi mountains. These mountains are verdurous. If you take one of the many trails or some country road to the hill’s slopes, you will be impressed by the abundance and variety of natural vegetation.

South of the village where you come across the Evgali mountain, which reaches 450 meters, right behind it you can glaze at the village’s highest point, the mountaintop of Stavrovouni at an altitude of 688 meters. The Holy Monasteries of Stavrovouni and “Agias Varvaras” (St. Barbara) are within the community’s administrative borders.

Camping Site
Pyrga receive an annual average rainfall of about 430 millimetres. In the region, where because of these mountainous formations that surround the village, a shallow -yet very fertile -valley is formed that constitutes the community’s main agricultural “lung”. Cereals, potatoes, vegetables, citrus trees, olives, carobs, and some legumes (mainly black-eyed French beans) are the basic products that are produced here. Large tracts of state-owned and privately owned land are -fortunately -still not cultivated, thus giving the chance to a great variety of wild vegetation to unfold in all its magnificence.

The village’s first fountain
Pines, Phoenician junipers, wild olive trees, terebinths (turpentine trees), lentisks, butcher’s brooms, thorny brooms, lavenders “stoechas”, thorny burnets, sages (cistus and camomile), and thymes are only but a few of the species that one comes across while passing by. Besides, it is no coincidence that all the known botanists that have -from time to time -occupied themselves with the land’s flora have spent a great deal of their time in this region. (Sibthorp 1787, Kotschy 1859, Sintenis 1880, Lindberg 1939).

This varied natural vegetation is not irrelevant to the local production of the renowned “Honey of Stavrovouni”. The abundant and select flowers is what gives the region’s honey its excellent taste and aroma. The inhabitants have realised that the future of the community and also its own existence is directly associated with this natural landscape. So they became sensitive to the issue in time and have made dynamic (and also in-court) struggles for the preservation of their community’s natural environment.

The old Water-mill
With regards to transportation, Pyrga is connected to the village Kornos in the west (about 3,5 km), to the village Agia Anna in the north-east (about 6,5 km), and through it to the city of Larnaca. It has a distance of about 5 kilometres from the neighbouring village Psevdas, which is in its north-east.

The old Water-mill
The original core of the settlement, which concentrates the small, traditional houses that are built with sun-dried bricks or chestnut lava, is continually being abandoned. Several modern houses and country houses are being constructed in the village’s precinct, especially at the tops and slopes of the hills. It seems that the verdant landscape of Pyrga has been spotted early on, since several inhabitants of Larnaca and Nicosia have found here the right place for their country houses and cottages.

The village was in existence since Mediaeval times. Its name however relates to the Byzantine times.

There are two interpretations regarding the name of the village (Pyrga or Pyrka). The first, which seems to be most probable, claims that its name was taken by the red colour (“pyrron” = red) of the region’s soil. That is, the name of the village is quite ancient and originates from pyr (fire) and the Doric idiom ga (instead of “gi” which means earth). Therefore Pyrga holds the meaning of “red soil”. 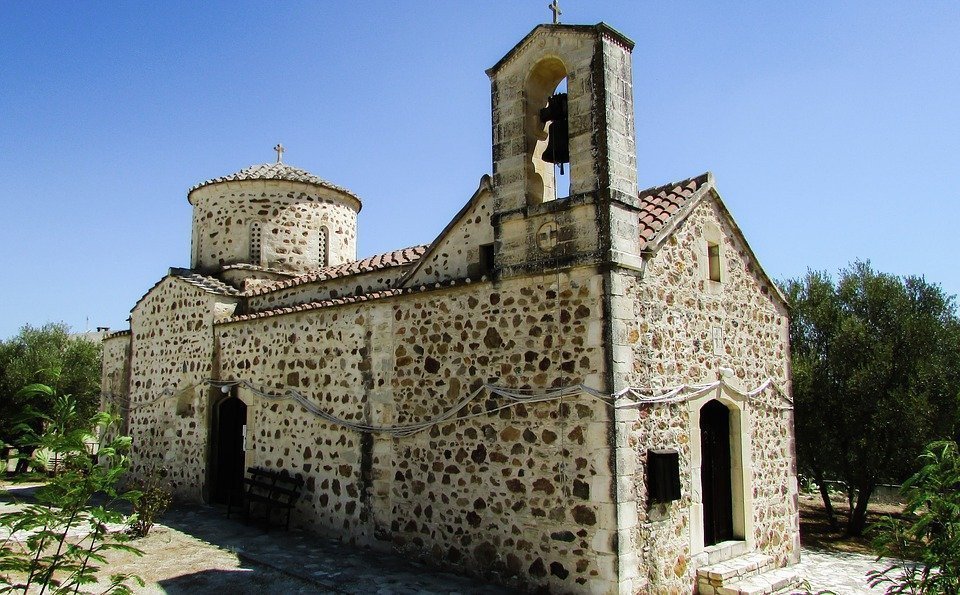 A landscape from the village
The other interpretation reports that in this region, because of the thick forests, there were many pottery and charcoal kilns that were lit all the time. That is, there were many ” pyrkagies ” (plural, meaning fires) and so it got its name.

The village’s history is very old and goes back to Antiquity. This is witnessed by the various archaeological findings that were discovered in the region, such as caves, earthen statues, pots, coins, jewels, etc. Quite a few of those are in museums abroad, unfortunately having been transferred there by smugglers of antiquities, Ambassadors and High Commissioners of the Great Powers in the island during those days. The poverty and ignorance that prevailed then made their task easier.

The old mediaeval churches that are extant in the community today (Royal Chapel, Agia Marina, “Panagia tis Stazousas”) are witnesses of its history din that period.

An old tradition reports that the great treasure of Ianos (Janus), (silver, gold, and coins) which was never found, is still hidden in Pyrga, in the underground galleries that are rumoured to exist under and around St. Catherine (Royal Chapel). According to the legend this treasure is large enough to support the entire population of Cyprus for several years.

A panoramic view of the village
The excellent climate, the verdant landscape, as well as the easy access from Larnaca and Nicosia have made Pyrga a wonderful place for the acquisition of a country house or a permanent habitat. These advantages seem to have been noticed early on by the inhabitants of the two cities, because quite a few of them found here their own ideal place for their country houses and their villas. Recently a large, privately owned Community Centre was built in the middle of the village, housing the Offices of the Community, a Health Centre, a Post Office, a cafeteria / restaurant, a hall for events / meetings, etc.

Everything indicates that this kind of growth and development will also continue in the years to come, thus converting Pyrga into a quiet, modern, and proximal resort, a kind of “Ekali” for the inhabitants of Larnaca and Nicosia. The only precondition being that the natural environment must be preserved at all costs.

Courtesy of the Community Council of Pyrga