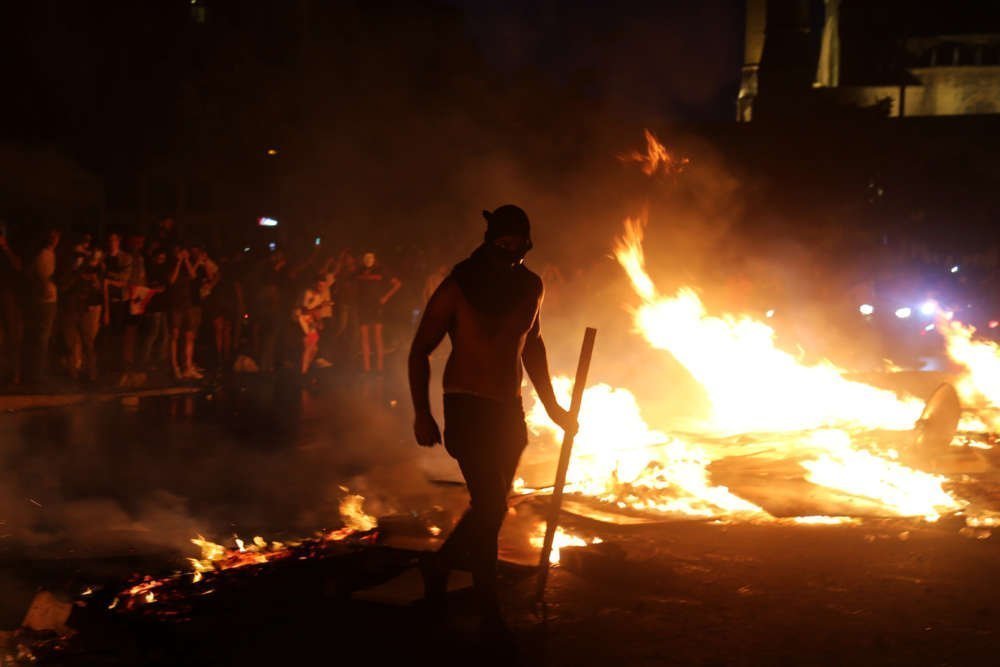 Security forces fired tear gas and chased down protesters in Beirut on Friday after tens of thousands of people across Lebanon marched to demand the demise of a political elite they accuse of looting the economy to the point of collapse.

Riot police in vehicles and on foot rounded up protesters, according to Reuters witnesses. They fired rubber bullets and tear gas canisters, dispersing demonstrators in Beirut‘s commercial district. Dozens of people were wounded and detained.

Prime Minister Saad al-Hariri blamed his partners in government for obstructing reforms that could ward off economic crisis and gave them a 72-hour deadline to stop blocking him, otherwise hinting he may resign.

Lebanon’s biggest protests in a decade recall the 2011 Arab revolts that toppled four presidents. Lebanese from all sects and walks of life have come out on to the streets, waving banners and chanting slogans urging Hariri’s government to go.

The rallies follow warnings by economists and investors that Lebanon’s economy and graft-riddled financial system are closer to the brink than at any time since the war-torn 1980s.

“There are those who have placed obstacles in front of me … and in the face of all the efforts that I have proposed for reform,” Hariri said, without naming names.

“Whatever the solution, we no longer have time and I am personally giving myself only a little time. Either our partners in government and in the nation give a frank response to the solution, or I will have another say,” he said.

Protesters poured through villages and towns as well as the capital Beirut for a second day. No political leader, Muslim or Christian, was spared their wrath.

Their chants called for leaders including Hariri, President Michel Aoun, and Parliament Speaker Nabih Berri to step down.

The mood was a mixture of rage, defiance and hope.

As night fell, crowds waving Lebanese flags marched through the streets as patriotic music blared from loudspeakers. They shouted: “Our demands are one, our objective is one: the people want the downfall of the regime.”

“You should be protecting us. Shame on you,” a young man yelled as he covered his face against the choking fumes.

As fires blazed, some streets in the capital looked like a battlefield, strewn with rubber bullets, smashed up cars, broken glass and torn billboards. Firefighters struggled late into the night to douse the flames.

With demonstrators crowding around Aoun’s palace in Baabda, the United Nations urged all sides to refrain from actions that could lead to more tensions and violence.

Saudi Arabia, Kuwait and the United Arab Emirates warned their citizens against travelling to Lebanon. Bahrain told its nationals to leave at once.

The latest unrest erupted out of anger over the rising cost of living and new tax plans, including a fee on WhatsApp calls.

“We came to the streets because we can no longer bear this situation. This regime is totally corrupt,” said Fadi Issa, 51, who marched with his son. “They are all thieves, they come into the government to fill their pockets, not to serve the country.”

In an unprecedented move, Shi’ite protesters also attacked the offices of their deputies from the influential Hezbollah and Amal movements in southern Lebanon.

To boost revenues, a government minister on Thursday unveiled a new fee for WhatsApp calls that fuelled outrage. But as the protests spread hours later, Telecoms Minister Mohamed Choucair revoked the planned levy.

In a country fractured along sectarian lines, the unusually wide geographic reach of the protests highlights the deepening anger of the Lebanese. The government, which includes nearly all Lebanon’s main parties, has repeatedly failed to implement the reforms needed to fix the national finances.

Shattered by war between 1975 and 1990, Lebanon has proportionally one of the world’s highest debt burdens. Economic growth has been hit by regional conflict, while unemployment among the under-35s runs at 37%.

Sectarian politicians, many of them civil war militia leaders, have used state resources for their own benefit and are reluctant to give that up.