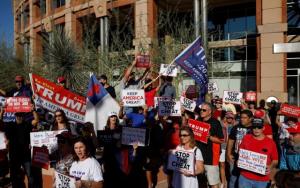 Hundreds of American protesters took to the streets across the country for a third straight night on Friday (November 6) to demonstrate against what President Donald Trump has baselessly called a rigged election, in battleground states where votes were still being counted.

The demonstrations were largely peaceful with few reports of scuffles and shouting erupting between Trump supporters and counter-protesters. Trump says the election is being stolen but there has been no evidence of fraud.

In Arizona, one of the closely contested states in the too-close-to-call race between Trump and Democratic challenger Joe Biden, Trump supporters carried pro-Trump flags and banners as they chanted “four more years,” outside the Maricopa County Elections Department in Phoenix.

Local election officials continued to tabulate ballots across the country, in some cases processing an unprecedented number of mail-in ballots that accumulated as a preferred voting option during the coronavirus pandemic.

Trump supporters took their queue from the president, who has repeatedly and falsely claimed that mail-in votes are especially prone to fraud.

Democrat Joe Biden said on Friday that he was going to win the U.S. presidency as his lead grew over President Donald Trump in battleground states, although television networks held off from declaring him the victor as officials continued to count votes.

Biden’s speech was originally planned as a victory celebration, but he changed his approach in the absence of an official call from television networks and other election forecasters.

Still, it amounted to a blunt challenge to Trump, who kept out of view in the White House as Biden’s lead grew in the four states that will decide the outcome: Pennsylvania, Georgia, Arizona and Nevada.

Leading Trump by 4.1 million votes nationwide out of a record 147 million cast, Biden said Americans had given him a mandate to tackle the coronavirus pandemic, the struggling economy, climate change and systemic racism.

He said he hoped to address Americans again on Saturday (November 7).