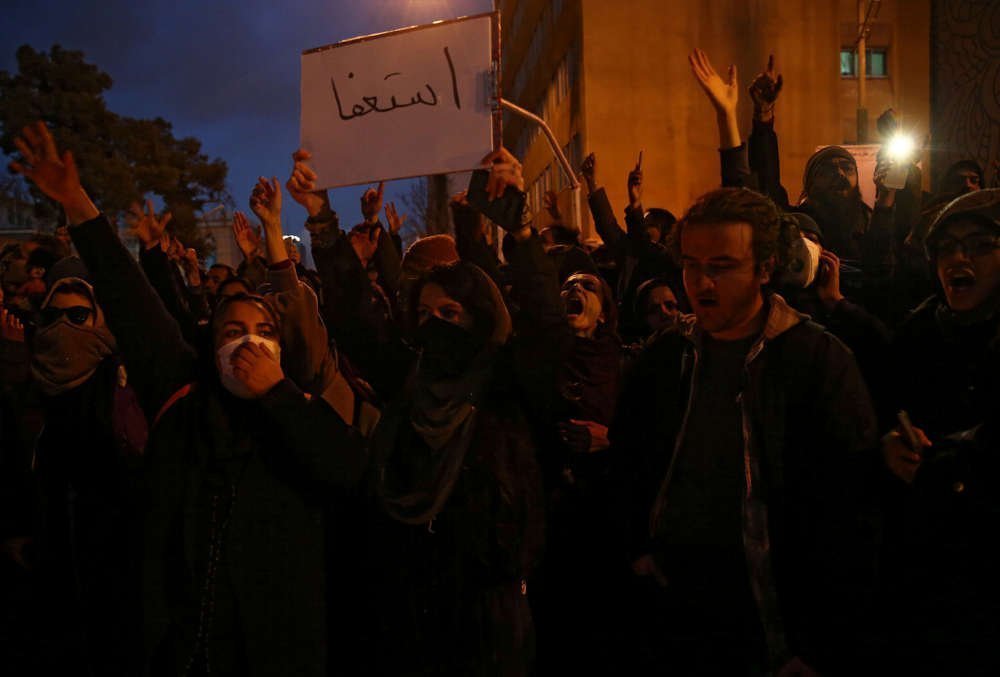 Iran‘s admission that it shot down a Ukrainian airliner, killing all 176 aboard, has provoked international outrage and triggered growing protests against Iranian authorities in Tehran and other cities including one in which Britain’s ambassador was detained.

In what President Hassan Rouhani called a “disastrous mistake”, Iran said on Saturday that a missile fired in error on Wednesday by its air defences while on alert after Iranian missile strikes on U.S. targets in Iraq brought down the plane. Iran had denied for days after the crash that it had shot down the airliner.

Even as top Iranian officials and the military issued apologies, protests against authorities spread across Iran including in the capital Tehran, Shiraz, Esfahan, Hamedan and Orumiyeh. U.S. President Donald Trump, who has said he does not seek “regime change” in Iran, took to Twitter to express his support for the demonstrators, writing, “We are following your protests closely, and are inspired by your courage.”

“The government of Iran must allow human rights groups to monitor and report facts from the ground on the ongoing protests by the Iranian people. There can not be another massacre of peaceful protesters, nor an internet shutdown. The world is watching,” Trump wrote.

Britain’s Foreign Office confirmed late on Saturday that the country’s ambassador in Tehran had been briefly detained by Iranian authorities. The Tehran-based Tasnim news agency said the envoy was arrested for several hours in front of Amir Kabir University for inciting anti-government protesters.

“The arrest of our Ambassador in Tehran without grounds or explanation is a flagrant violation of international law,” Foreign Secretary Dominic Raab said in a statement.

“The Iranian government is at a cross-roads moment. It can continue its march towards pariah status with all the political and economic isolation that entails, or take steps to de-escalate tensions and engage in a diplomatic path forwards,” Raab added.

A leader of Iran‘s opposition Green Movement, Mehdi Karroubi, called on Iran‘s Supreme Leader Ayatollah Ali Khamenei to step down over the handling of the downed airliner.

“What Iran has admitted to is very serious. Shooting down a civilian aircraft is horrific. Iran must take full responsibility,” Canadian Prime Minister Justin Trudeau, whose country had 57 citizens on board, told a news conference in Ottawa. “Canada will not rest until we get the accountability, justice, and closure that the families deserve.”

Trudeau said Rouhani committed to collaborating with Canadian investigators, working to de-escalate tensions in the region and continuing a dialogue.

Up to 1,000 protesters chanted slogans in Tehran against the authorities, the semi-official Fars news agency said in a rare report on anti-government unrest.

Demonstrators ripped up pictures of Qassem Soleimani, Iran‘s most influential military commander who was killed in a Jan. 3 U.S. drone strike in Iraq ordered by Trump. Iranian missile strikes on U.S. targets in Iraq on Wednesday in retaliation for the killing led to Iran being on a state of high alert for possible reprisals when the plane was downed.

On Twitter, videos showed protesters demanding that Khamenei step down because of the disaster.

Demonstrations in Iran against a hike in fuel prices turned political last year, sparking the bloodiest crackdown in the 40-year history of the Islamic Republic. About 1,500 people were killed during less than two weeks of unrest that started on Nov. 15, three Iranian interior ministry officials told Reuters, though international rights groups put the figure much lower and Iran called the report “fake news.”

Iran‘s clerical rulers risk a legitimacy crisis amid popular anger at the way they handled the plane’s downing. The belated admission by Iran‘s elite Revolutionary Guards squandered the national unity on display after Soleimani’s killing. Khamenei, who has no term limit, has been in office since the death in 1989 of the founder of the Islamic Republic, Ayatollah Ruhollah Khomeini. Khamenei is 80.

Khamenei, until now silent about the crash, said information about the incident should be made public.

The shooting down of the passenger jet heightened international pressure on Iran after months of friction with the United States and tit-for-tat attacks. Canada and the United States had both said early on that they believed an Iranian missile brought down the aircraft, probably in error.

“The Islamic Republic of Iran deeply regrets this disastrous mistake,” Rouhani wrote on Twitter, promising that those responsible would be prosecuted.

In a televised address on Saturday, Ukrainian President Volodymyr Zelenskiy said he had agreed with Rouhani on the beginning of joint work on decoding the black boxes from the downed aircraft. Zelenskiy also urged Ukraine’s international partners to be united and persistent until the investigation was complete.

In Twitter messages, angry Iranians asked why the plane was allowed to take off with tensions in Iran so high. The plane, a Boeing 737-800 bound for Kiev, came down shortly after takeoff from Tehran, when Iran was alert for U.S. reprisals after launching rockets at U.S. troops in Iraqi bases.

Iran‘s Revolutionary Guards, in a rare step, apologised to the nation and accepted full responsibility. Senior Guards commander Amirali Hajizadeh said he had informed Iran‘s authorities on Wednesday about the unintentional strike, a comment that raised questions about why officials had publicly denied it for so long.

A military statement said the plane flew close to a sensitive Revolutionary Guards site at a time of high alert. Ukraine said the plane was in a normal flight corridor and Iran‘s Civil Aviation Organisation said the airliner had not veered off its normal course.

Ukraine International Airlines said Iran should have closed the airport. The carrier said it had received no indication it faced a threat and was cleared for take off.