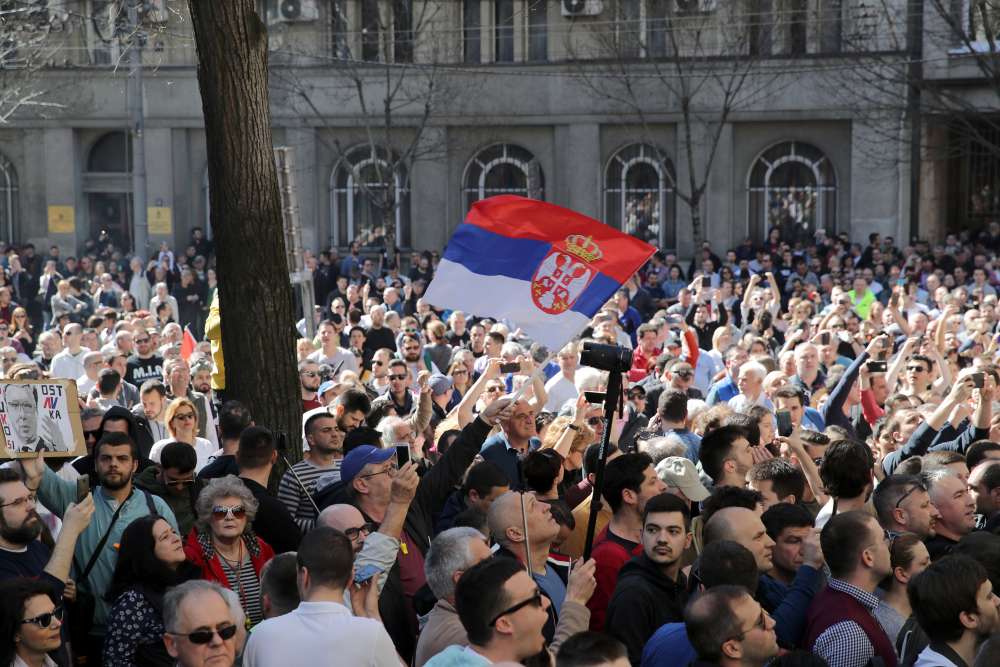 Thousands of anti-government protesters staged a rally outside President Aleksandar Vucic’s residence on Sunday to press their demands for greater media freedom and free and fair elections, a day after they briefly broke into the state television building.

Riot police used pepper spray against a small group of the protesters after they tried to bring a truck with loudspeakers closer to the residence, a Reuters photographer said.

The protesters, who have been staging such rallies every weekend for more than three months, blew whistles and shouted “resign!” as Vucic gave a news conference inside the building.

“We shall continue the blockade of the presidency and we will not leave until our demands are met or unless we get firm guarantees that our demands will be met,” Borko Stefanovic, an opposition activist, told reporters.

“There are no independent media here in this country,” said Srdjan Vuksa, a businessman from the town of Kovin near Belgrade. “I came here to express my dissatisfaction with that.”

The protests have spread to other cities and towns, though numbers outside Belgrade have remained small.

On Saturday evening the protesters briefly occupied the state television building, angered by what they say is scant coverage of their demonstrations by state media.

Anti-government demonstrators last stormed the state TV building, known as the government mouthpiece, on October 5, 2000, bringing down the regime of strongman Slobodan Milosevic.

Commenting on Saturday’s incident at the state TV building, Vucic said at his news conference: “I am not afraid.”

Vucic has previously said he would not bow to opposition demands for electoral reform and increased media freedom “even if there were five million people in the street”, but said he was willing to test his party’s popularity in a snap vote.

By In Cyprus
Previous articleAlassa Dam: before and after the rains (photos)
Next articleNew police campaign against drunk driving