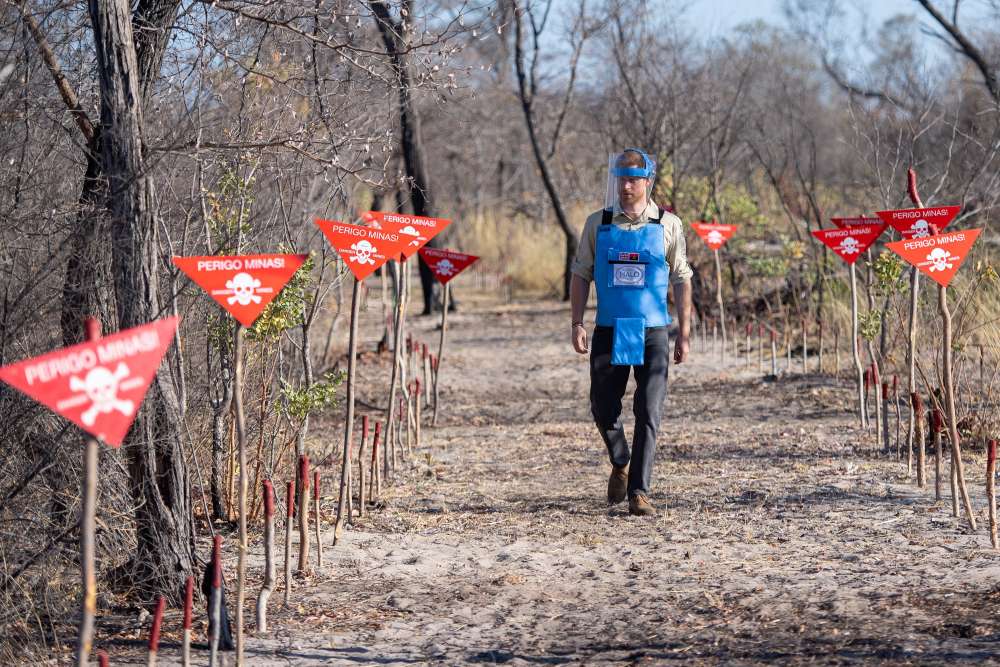 Britain’s Prince Harry followed in his late mother’s footsteps on Friday, wearing a protective vest and visor during a visit to a de-mining project in Angola that echoed a famous series of images taken of Princess Diana more than 20 years ago.

Queen Elizabeth’s grandson and sixth in line to the British throne visited a de-mining field outside Dirico, a town in Angola’s Cuando Cubango province, where, wearing a safety vest, he remotely detonated a mine in a controlled explosion. He also met community members.

Harry then visited Huambo, retracing his mother’s steps on a street that was once a path in a dangerous minefield.

The 35-year-old walked down Princess Diana Street and sat beneath the Diana Tree, the spot where his mother, who campaigned for a global ban on mines, was photographed.

“It has been emotional retracing my mother’s steps along this street 22 years on, and to see the transformation that has taken place, from an unsafe and desolate place into a vibrant community of local businesses and colleges,” Harry said.

“But let us not lose sight of the reality. Twenty two years after my mother visited Angola, there are still more than 1,000 minefields in this beautiful country that remain to be cleared. I wonder if she was still alive whether that would still be the case. I’m pretty sure she would have seen it through.”

The pictures of Diana wearing protective gear as she walked among red skull-and-crossbone signs in Huambo in January 1997 won publicity for the HALO Trust, which was clearing mines left during Angola’s civil war.

They were taken a few months before her death in Paris in a car crash. The international treaty to ban the weapons was signed later the same year.

Harry’s visit to Angola is part of a southern African trip by him, Meghan and their four-month-old son Archie. Their first overseas tour as a family began in South Africa on Monday.

They drew crowds of well-wishers on their first three days in Cape Town, where they visited non-governmental organisations working with vulnerable communities and young people and met Nobel Peace Prize laureate Desmond Tutu.

While Meghan and Archie stayed in South Africa, Harry headed to Botswana on Thursday.

In June, he threw his weight behind mine clearance efforts in Angola, saying land mines were “a humanitarian issue and not a political one.”

The landmines were planted during Angola’s 27-year civil war, which ended in 2002. Many people remain displaced and thousands have been left with disabilities from landmines which continue to maim and kill.

Harry has been visiting southern Africa for two decades for holidays and conservation work.

He ends the solo section of his tour on Tuesday in Malawi, where he will meet President Peter Mutharika and pay tribute at the memorial site for British soldier Guardsman Mathew Talbot, who was killed in May while taking part in counter poaching operations in the country.

Harry will then rejoin Meghan and Archie for a township visit on Wednesday near Johannesburg. They will meet Graca Machel, widow of South African anti-apartheid leader Nelson Mandela, and President Cyril Ramaphosa before departing for London.