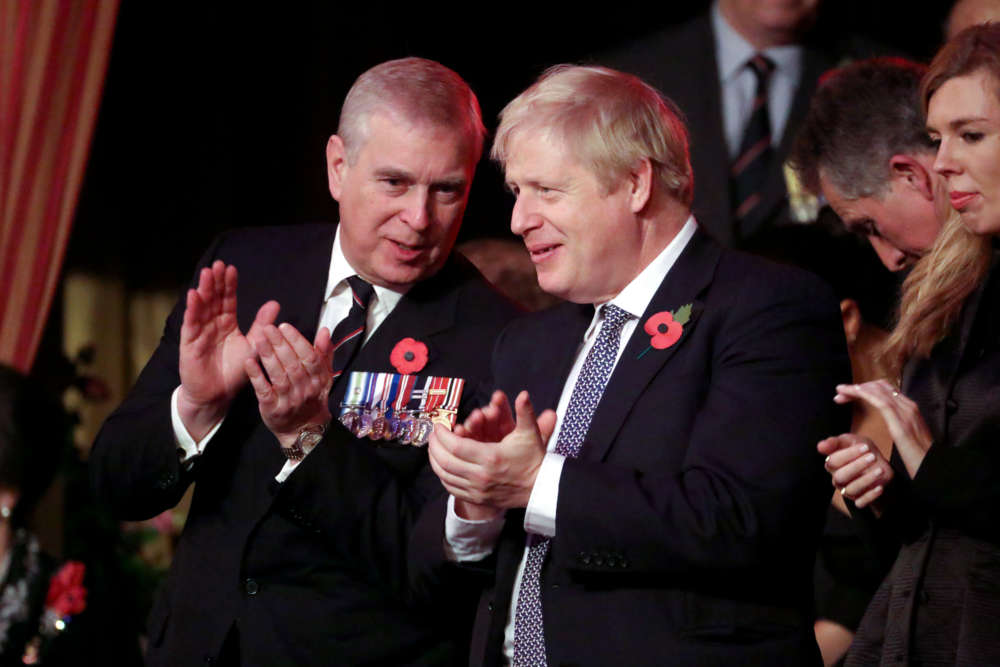 A sex claim scandal involving Prince Andrew overshadowed Britain’s election campaign on Monday when Queen Elizabeth’s second son faced a backlash after a rambling denial of accusations he had sex with a teenage girl.

Prime Minister Boris Johnson and his main opponent, Labour Party leader Jeremy Corbyn, had planned to showcase their starkly different plans for the world’s fifth largest economy ahead of the Dec. 12 election.

Instead, their speeches were overshadowed by Andrew’s extraordinary explanation of his relationship with late U.S. financier Jeffrey Epstein and a denial of ever having sex with one of Epstein’s accusers, Virginia Giuffre, when she was 17.

At an event organised by Britain’s main business lobby group, the CBI, Johnson was asked twice about Prince Andrew, including whether he shared “the nation’s incredulity” about Andrew’s account of his behaviour and what he would advise the queen to do.

“I won’t get dragged into commentary about matters concerning the royal family,” Johnson said after pledging to end the Brexit uncertainty by leading Britain out of the European Union by Jan. 31.

Earlier, Johnson was asked by a reporter whether he would encourage Andrew to cooperate with U.S. authorities over Epstein’s actions. Johnson replied: “Nice try.”

Andrew’s comments to the BBC dominated the news agenda and drew scorn in British media, which said his explanations were unsatisfactory. Lawyers for Epstein’s victims said the prince showed little sympathy for those abused.

The prince, whose official title is the Duke of York, said in the BBC interview aired on Saturday that he could not have had sex with a teenage girl at a socialite’s London home because he returned to his house after a children’s party on the night in question and had no memory of meeting her.

“I can absolutely, categorically tell you it never happened,” Andrew said. “I have no recollection of ever meeting this lady, none whatsoever.”

Andrew gave various reasons why her account of meeting him sweating and dancing almost two decades ago at a London nightclub before having sex with him could not be true.

These included that he suffered from a medical condition that stopped him perspiring, that he “never really partied” and that he avoided “public displays of affection”.

Yet British media published pictures of Andrew at a host of parties in the company of different women, some showing him displaying affection and clearly perspiring.

Labour’s trade spokesman, Barry Gardiner, called on Andrew to give evidence to U.S. investigators over his links to Epstein.

Two days after it aired, Andrew’s interview was still front page news for British newspapers, which described it as a “car crash” that raised questions about Andrew’s future.

“Prince Andrew has brought shame on the UK and continues to disgrace himself as he shows no remorse or insight into what he has done,” said Graham Smith, head of the anti-monarchist group Republic.

Jennifer Arcuri, a U.S. businesswoman who received thousands of pounds in public funds and travelled on trade trips with Johnson while he was mayor of London, was asked by the ITV broadcaster if she had had an affair with him.

“I’m not going to answer that question but as you can tell there was a very special relationship there,” she replied.

The Greater London Authority (GLA) has referred Johnson to Britain’s police watchdog for potential investigation over allegations of misconduct involving his relationship with the businesswoman. He has denied any impropriety.

By In Cyprus
Previous articleDymes
Next articleStuffed vine leaves with anari, carob syrup and gooseberry sauce