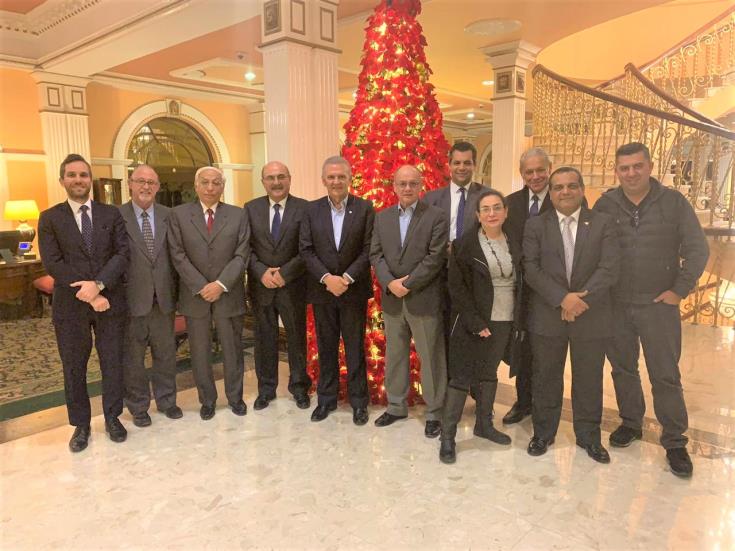 Presidential Commissioner Photis Photiou is in Egypt on behalf of President Nicos Anastasiades, to represent Cyprus at the 3rd World Youth Forum.

Arriving in Cairo, Photiou was welcomed by the chairman and members of the Cypriot Brotherhood of Cairo and newly appointed Ambassador of Cyprus to Egypt, Omiros Mavrommatis.

The forum will be opened by Egyptian President Abdel Fattah el-Sisi in the Red Sea resort town of Sharm El-Sheikh on Saturday.

Among the issues that will be examined are industrial revolution, food security, environmental challenges, artificial intelligence, block chain technology, women empowerment. It will be held under the title: “International Peace and Security: Current Challenges” and various leaders and business representatives are expected in the North African country for the four-day Forum.

Photiou was briefed by the chairman of the Cypriot Brotherhood Andreas Mavrommatis regarding the activities of the organisation and issues which Cypriots in Cairo face.

The Presidential commissioner offered solutions to the issues which the Cairo Cypriot Brotherhood is facing and assured of the support for young people. He further said the youth are the future of the Cypriots in Egypt and expressed his interest for the graduates of the Ambetios School who visit Cyprus annually with the support of the Cyprus government and organisations.
Mavrommatis thanked Photiou for his genuine interest for the Cypriot diaspora in Egypt.
On the occasion of Photiou’s visit, the Cypriot Brotherhood welcomed to Cairo the island’s new ambassador to Egypt, Omiros Mavrommatis.

During his stay in Sharm El Sheikh, Photiou will meet his counterpart Nabila Makram. He returns home on Monday.