President: Turkey should show goodwill for permanent peace in Cyprus 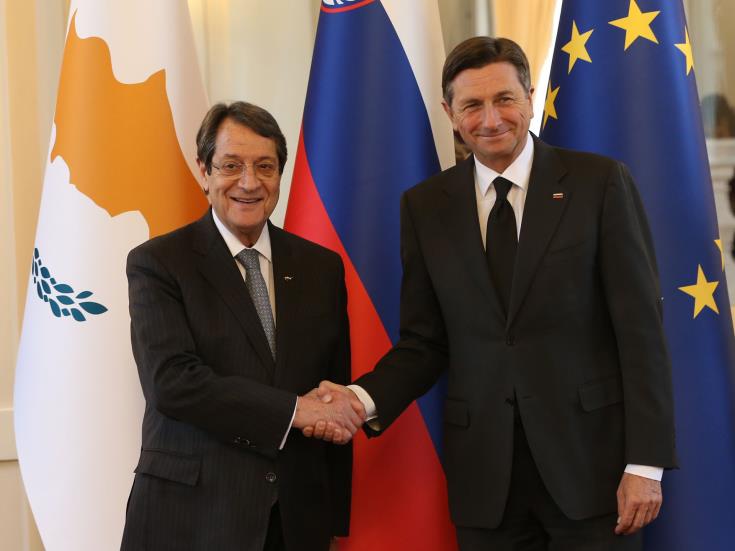 Cyprus President Nicos Anastasiades has stressed that Turkey should show goodwill and sincere desire, so that a permanent and lasting peace in Cyprus is achieved, to the benefit of relations with Ankara, and the promotion of peace and stability in the broader region.

In statements in Slovenia, where he is paying an official visit, after talks between delegations of the two countries, Anastasiades also noted, responding to a question, that “there are also differences between Greek Cypriots and Turkish Cypriots.”

He expressed certainty that “there are ways to sort things out as suggested by the UN Secretary-General through the Framework he submitted in Crans-Montana in 2017 and provided for the replacement of the anachronistic guarantee and intervention rights, the effective functioning of the state, the respect of the international law, but also as regards the differences between Greek Cypriots and Turkish Cypriots as regards the functionality, the durability of the settlement etc”. He added that there is an easy way to solve all this, which is the acceptance of the EU principles and values.

On his part, the President of Slovenia Borut Pahor said, speaking through an interpreter, that the two countries must cooperate for the settlement of the Cyprus problem and for the arbitration of Slovenia as regards Croatia.

In their statements both Presidents underlined the excellent level of the bilateral relations between Cyprus and Slovenia, noting, at the same time, the will of the two countries to further enhance these relations.

According to a press release issued by the Presidency, in his statements at the Presidential Palace in Ljubljana, President Anastasiades referred to his meetings with Pahor, the Prime Minister of Slovenia Marjan Šarec and the Speaker of the National Assembly Search Results Dejan Židan during which, as he noted, issues of mutual concern were discussed, first of all the European integration and cooperation with the view to avert foreseen dangers.

Speaking about the Cyprus problem, President Anastasiades referred to the latest developments, underscoring his readiness to continue in cooperation with the UN Secretary-General a creative dialogue “that will allow us to achieve a settlement that will be compatible with the acquis communautaire, the international law, a  settlement that will respect the human rights of all Cypriots, will create a functional state and will allow us to create conditions of permanent stability and peace, in a country that has been experiencing the violation of human rights for 44 years now.”

Moreover, he said that he expressed gratitude for Slovenia’s longstanding position in favour of a peaceful settlement of the Cyprus problem, and its active involvement in the region, with the presence of a military contingent in the UN peace keeping force in Cyprus from 1997 until 2001.

President Anastasiades conveyed an invitation to his Slovenian counterpart to visit Cyprus.

On his part, speaking through an interpreter, the Slovenian President, said, inter alia, that the two countries believe in the European idea and through it to peace, security and prosperity, noting that Europe calls on its citizens to vote during the European elections without any vision, however.

He noted that multilateral relations have great importance both for Slovenia and Cyprus, noting that both countries are defenders of the international law.

To a question about the immigration issue, which Europe has to address, the Slovenian President said, inter alia, that there needs for a common policy, adding that if Europe wants to move forward it has to find joint solutions to this problem.

To a question about the main problems being faced as regards the issue of Cyprus, President Anastasiades noted that first of all it is the military occupation and the presence of 40,000 troops on the island, secondly the violation of Greek Cypriots human rights and thirdly Turkey’s demand to continue the anachronistic security system which includes Turkish guarantees and intervention rights in Cyprus, and to maintain Turkish troops on the island.

He recalled the Cyprus is an EU member state and stressed the need for implementing everything which applies in other member states, with a view to achieve a functional and durable settlement, that will bring permanent peace.

Anastasiades stressed that the Greek Cypriot side is working so that dialogue will begin on the basis of the SG’s parameters, the UNSC and General Assembly resolutions, and the EU principles.

By In Cyprus
Previous articleTrump storms out of talks on shutdown, bemoans ‘total waste of time’
Next articleCyprus passport ranked 16th worldwide for travel access